RIVER FALLS University of Wisconsin River Falls student Anna Euerle loves to tell the story of sitting for more than eight hours in a 40 degree cooler as her likeness was carved into 90 pounds of salted butter after she was crowned the 68th Princess Kay of the Milky Way at the Minnesota State Fairgrounds last August.

Euerle, of Litchfield, Minn., is a senior ma joring in food, science and technology. She serves as Princess Kay of the Milky Way, the of ficial goodwill ambassador for nearly 2,200 Minnesota dairy farm families.

“I got to take the sculpture home after the fair,” Euerle said. “It is in a freezer by itself at my grandma’s house. I was going to have a big corn feed and use the butter for that. We are waiting though. It’s a fun keepsake but I would love to use it.”

Fellow UWRF student Jackie Rosenbush, of Spooner, a junior agricultural education major, is Wisconsin Fairest of the Fairs. Rosenbush was named in January to serve the yearlong term.

Each year, the Wisconsin Fairest of the Fairs travels throughout the state promoting the edu cational, agricultural, social, cultural and com mercial opportunities available at Wisconsin’s fairs.

“What drew me was I have the opportunity to represent all 75 county, local and state fairs in the state of Wisconsin,” Rosenbush said. “I will try my best to get to every one.”

“My mission is to educate others about agri culture and this position gives me that opportu nity,” Rosenbush said.

Rosenbush is quick to point out, however, that fairs are really for everyone young and old, regardless of their background.

Rosenbush will serve as the official hostess of the Wisconsin State Fair from Aug. 414 in West Allis.

Rosenbush, who was involved with FFA starting in 2015 and included serving on the Wisconsin FFA State Officer team from 2020 21, farming has been a part of her life.

She and her sister, Kate, coown a 100head sheep farm in northern Wisconsin that Rosen bush cares for on weekends even as a member of the UWRiver Falls track team.

“Weekends are not weekends, they are for work,” she noted. “It’s lambing time, so we have been very busy. I love it. It has taught me disci pline and dedication.”

The farm, which started in 2006, is named RN’R Romneys and Columbias.

“We work a lot with sheep at the fairs,” Rosenbush said. “We really are interested in wool production.”

“This campus is beautiful,” she said, while being interviewed during campus Ag Day on April 19 hosted by the Collegiate Farm Bureau. “I love every day here. UWRiver Falls defi nitely felt like home.”

Wisconsin Fairest of the Fairs had 33 contest ants this year for the title and is chosen by a panel of three judges representing the fair, mar keting and hospitality industries. Rosenbush was crowned at the Wisconsin Association of Fairs Convention in Wisconsin Dells.

Euerle, who has her associate degree in agri culture business from Ridgewater College in Willmar, Minn., started her first semester at UWRF this spring. When she first visited cam pus in the fall, she knew it was a good fit.

“I loved it,” Euerle said. “I don’t feel like a number here. I wanted a good handson experi ence. I’m really blessed I chose it.”

Being Princess Kay has allowed Euerle to talk to consumers and have genuine conversa tions about dairy farms and producers.

“It’s more than the dairy farmers,” she added. “It’s the nutritionists, the veterinarians and everybody I call the support staff of dairy farm ers. The Midwest Dairy has also provided me with a fabulous foundation to work with the dairy community. I get to share with others about the community, including other women interested in it.”

Euerle has had the opportunity to meet younger students in K12 schools.

“I go into the classroom and take them on a virtual reality 360degree visit to a robotic carousel dairy,” she noted. “The students just love it. It has just been a blast.”

During Ag Day, Julia Nunes, of Chippewa Falls, the reigning Alice in Dairyland, also vis ited campus. Nunes is the first Alice to serve two consecutive terms in the program’s history. She started serving as the 73rd Alice in July 2020 and her term as the 74th Alice will end in July.

Alice in Dairyland is a fulltime public rela tions and communications professional for the Wisconsin Department of Agriculture, Trade and Consumer Protection.

Nunes, who used to work in River Falls, has ties to the university as well. Her current signif icant other, Kendall Keegan, is a 2019 alum and her sister, Katrina, is also an alum.

UWRiver Falls students Anna Euerle, second from left, and Jackie Rosenbush, third from left, are helping to promote agriculture. Euerle is serving as Princess Kay of the Milky Way, the official goodwill ambassador for nearly 2,200 Minnesota dairy farm families, and Rosen bush is the Wisconsin Fairest of the Fairs, who promotes the educational, agricultural, social, cultural and commercial opportunities available at Wisconsin’s fairs. They are pictured with Julia Nunes, Alice in Dairyland, far left, and Greta Weix, Pierce County Miss United States Agriculture, and Freddy Falcon. 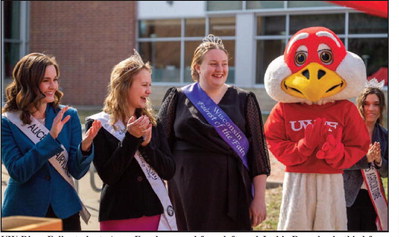