Prescott freshman catcher Leah French sits behind the plate and looks to the dugout for a pitch signal. Johnson spoke highly of French's ability as a young catcher, especially her arm strength. Photo by Reagan Hoverman
News, Sports
A bounce back for the ages

After Prescott’s devastating loss to the Ellsworth Panthers on Tuesday, April 19, the Cardinals are undefeated and have strung together what could be the most dominant stretch of softball that any team in the state has played this season.

Since that loss against Ellsworth, the Prescott Cardinals have played five games, all Middle Border Conference games, are 5 0, and have outscored opposing teams 58 1 in those games. Prescott head coach Nick Johnson spoke about what he has seen from his team during this five game heater.

“I’m so proud of our girls, they’re on a 58 1 run in these games,” Johnson said. “(The loss to Ellsworth) was definitely a wake up call. You look back and think what can you learn from that game? We’ve learned a lot.”

“It was kind of a shock (to see Baldwin lose),” Johnson said. “You know what, it’s a credit to our conference. Credit to Ellsworth for beating us, Saint Croix Central for beating Baldwin, we’ve got some strong teams and if you don’t bring it, you’re going to get upset. We got upset at Ellsworth and they got upset.”

After all of the fireworks throughout the rest of the Middle Border Conference, Prescott was tied with Baldwin Woodville (5 1) going into the home game against Altoona on Friday night. The Cardinals’ 6 1 victory moved Prescott into first place in the standings with less than a month left in the regular season.

Prescott held a 1 0 lead going into the bottom of the second inning. That’s when junior Izzy Matzek singled to shallow right

With runners on second and third, junior Maddie Reiter hit a two RBI single to right field to take a 3 0 lead. As Prescott con tinued to add on runs methodically throughout the second, fifth and sixth innings of the game, junior star pitcher Taylor Graf con tinued to produce a gem from the circle.

Graf, who pitched the Cardinals to a state championship game appearance last season, has found her groove in the last 7 10 days of action. She gave up one run against Altoona and pitched the complete game while striking out eight batters in the victory.

“Taylor (Graf) is lights out right now,” Johnson said. “That would have been her fifth straight shutout. She had 28 consecu tive – it’s not just Taylor (Graf), in 28 straight innings we haven’t given up an earned run.”

Prescott has played ten games so far this season, has won eight of them, and in seven of those wins, Graf was in the circle for the Cardinals. Of course, there are other capable pitchers on the ros ter, but Johnson has shown that in the biggest games of the year, Graf is the go to ace.

While Graf is outstanding on her own, it helps to have a high softball IQ catcher behind the plate. That’s exactly what Johnson and Graf have when French puts on the gear and gets behind the dish. Johnson spoke about how French changes the game.

“For a freshman, she’s solid,” Johnson said. “Leah’s arm strength is, she can shut down teams just because of how strong of an arm she has. She’s doing it and it’s been awesome. Our other catcher Addie Raebel, she’s solid too. We have two solid catchers.”

It seems that with less than a month left in the regular season, Prescott is hitting its stride and playing its best softball of the sea son. The roster has bounced back after the Ellsworth loss and Johnson said the team’s energy is electric.

ing this well. How they responded after a tough loss, we can’t re spond any better than this.”

Prescott has had so many things go right for them as of late; one exception is the health of junior Finley Magee, who has pulled her hamstring twice in less than a month. She is one of Prescott’s best hitters and needs to be healthy entering the play offs. Because of that, she is batting only and has yet to return to her semi regular position of first base. Johnson provided an up date regarding Magee’s status. 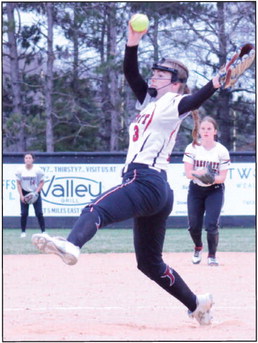 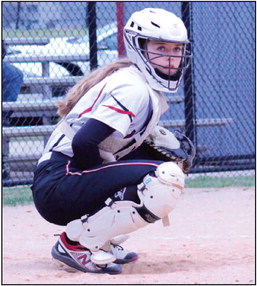