came the center of an inter

– national drama when he was captured by pirates who at – tacked and boarded his ship. Phillips will bring his inspirational story of per – severance and teamwork as part of the two University of Wisconsin-River Falls com – mencement ceremonies at 9 a.m. and 1 p.m. on Saturday, May 7, in the Falcon Cen –

ter's Knowles Field House. Having a speaker like Phillips is in response to student re

– quests, said Chancellor Maria Gallo. "He will inspire our graduates and their guests with his story of courage and leadership during a crisis and beyond," Gallo said, adding Phillips will be motivational and connect to the university's values. UWRF will graduate more than 700 students during the spring commencement ceremonies. At 9 a.m. the College of Agriculture, Food and Environmental Sciences and the Col – lege of Business and Economics and Graduate Studies will hold a commencement ceremony. The College of Arts and Sciences and College of Education and Professional Studies ceremony is at 1 p.m. Phillips, of Underhill, Vt., authored a book about his expe – rience that became the inspiration for the critically acclaimed, award-winning film "Captain Phillips" starring Tom Hanks. The movie was nominated for several Academy Awards. Phillips was held captive for several days by pirates who hijacked the Maersk Alabama. It was the first hijacking of a U.S. ship in more than 200 years. To protect his crew, Phillips made a conscious decision to put himself directly in harm's way and oered himself as a hostage to get the pirates o the Maersk Alabama. The stando dragged on until April 12, when Navy SEAL snipers shot the three captors holding Phillips on a lifeboat. Within minutes, Phillips was rescued. Phillips was hailed as a hero. "The real heroes are the Navy SEALS and our nation's men and women in uniform," Phillips said in a 2014 article published in the Weirton Daily Times. "They do the impossi –

– self a lucky guy. I'm not exactly intelligent or brave and all that. It was my duty." Phillips will address students about starting their profes –

sional careers and lives. Phillips is a graduate of the Massachusetts Maritime Acad

– emy, a member of the International Organization of Masters, Mates and Pilots Union, and a licensed American merchant mariner. He became captain of the Maersk Alabama in 2008. He married Andrea Coggio in 1987. They have two children, Mariah and Danny. Commencement ceremonies will also be available via livestream. For more information, go to the commencement website. Submitted by UW-River Falls 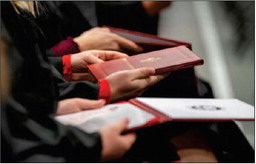