The biggest games of the year for every sport in Hudson and River Falls are the annual rivalry games between the two schools. It’s not rare for tem_ pers to flare and for games to end in hard_fought victories or devastating losses.

The two games between Hudson and River Falls last week featured a total of 20 runs scored between the two teams, despite the combined margin of victory in the games being two total runs in favor of Hud_ son. The Tuesday afternoon game was a 5_4 victory, and the Thursday afternoon game was a 6_5 victory, both in favor of Hudson. River Falls head coach Ryan Bishop spoke about the intensity of these games and the rivalry between the schools.

“It’s Hudson and it’s always going to be a fun, emotional week of competition,” Bishop said. “That’s just the way it works. They’re good, really good. They’ve got a loaded roster, loaded arms, they’re a really good team and you have to play well and can’t miss op_ portunities.”

River Falls had its opportu_ nities to get the job done in both games against the Raiders. During the home game on Tuesday afternoon, both teams struggled to put runs on the board. Going into the sixth inning, the game was knotted up 2_2.

In that sixth inning, Hudson added another run while hold_ ing River Falls scoreless to take a 3_2 lead going to the final frame. The Raiders’ of_ fense continued to produce. Hudson scored two more runs in the top of the seventh to take a 5_2 lead going into the bot_ tom of the seventh.

Despite scoring two runs to make it a 5_4 game, the River Falls comeback came up just short which dropped River Falls’ record to 6_2 for the sea_ son and 2_1 in Big Rivers games. Bishop spoke about missed opportunities for his team, which surely includes the four errors and eight men left on base in the game de_ cided by one run.

After a scoreless first in_ ning, River Falls drew first blood in the top of the second inning, which began with sen_ ior Jack Gehl’s one_out double to deep center field. Later in the inning, junior Jarett Young scored Gehl from second base with an RBI single down the left field line to take a 1_0 lead.

Hudson responded in the bottom of the second inning with two runs of its own to take a 2_1 lead going into the third inning. The Wildcats re_ sponded with two runs in the inning to take a 3_2 lead. Hud_ son’s errors in the field con_ tributed to River Falls’ success on the basepath and the score_ board.

After the first two Wildcat batters reached base to start the second inning, later advancing because of an error, senior out_ fielder Jeffrey Schurman, who was on third base, scored on a passed ball that reached the backstop to tie the game 2_2. River Falls did more damage when senior Teddy Norman scored on a fielder’s choice to take a 3_2 lead.

After scattered scoring throughout the third, fourth and fifth innings, the game was tied 5_5 going into the sixth in_ ning. The sixth frame proved to be pivotal for both teams, as River Falls had a baserunning blunder that took a runner out of scoring position and Hudson delivered clutch hitting to sea_ son the game.

After the aforementioned Schurman was hit by a pitch to start the inning, River Falls had a runner on base with no outs in the sixth inning of a tied game. After a flyout by the en_ suing batter, Schurman stole second base successfully to get into scoring position.

After the Wildcats’ score_ less top of the sixth inning, it was Hudson’s turn to break the game open in the bottom of the sixth. The Raiders knocked a double off the right field fence to get a runner in scoring posi_ tion early in the inning. Hud_ son followed that up with a single to shallow right field which scored the game_win_ ning run to secure the 6_5 win over River Falls.

“We had a couple of oppor_ tunities that we didn’t take the best advantage of,” Bishop said. “They got a couple of hits there at the end that squeaked through, but that’s baseball. It was a fun competitive week, but unfortunately, we come out on the short end. Maybe it adds a little fuel to the fire moving forward.”

Bishop spoke about creat_ ing breaks for his team and tak_ ing advantage of those breaks when they happen throughout the game. Whether that be making smart plays or stealing bases, he said that they didn’t do enough of that to win against Hudson.

River Falls certainly didn’t take advantage of several op_ portunities to pile on runs throughout the game. Hudson finished the game with six team errors, which is typically more than enough to cost a team a game.

“Anytime a team throws the ball around a little bit you hope that you can capitalize,” Bishop said of Hudson’s er_ rors. “I think we capitalized a little bit, but we had opportuni_ ties to capitalize even more and we didn’t get it done at the plate in a couple of those situ_ ations that were really impor_ tant.”

Junior Wildcat pitcher Eli Condon tallied over 100 pitches in his six innings of work on the mound. Despite giving up six runs, he battled, threw the ball well, and com_ peted against one of the best hitting lineups on this side of the state.

“It was a good, gutty per_ formance against a really good hitting team,” Bishop said. “Our guys are on a routine where they throw once a week, so we’re OK running their pitch count to 100 because they’re not going to throw no matter what until the following week. We’re careful with their arms and we know what they’re capable of. I thought he was sharp from start to finish.”

The two losses against Hud_ son dropped the Wildcats’ overall record to 6_3 for the season, including a 2_2 record in Big Rivers Conference games, which currently holds a three_way tie for fourth place in the standings.

“We don’t chase conference championships. We chase being the best that we can be game in and game out,” Bishop said. “Those things will take care of themselves. We know we probably would have got_ ten at least a split this week if we would have taken care of things a little bit better at the plate. It’s very possible an 8_4 team could win this league and I feel like we can be right in that mix.”

Important games coming up for River Falls includes a sea_ son series against Rice Lake. Those games will be on Tues_ day, May 3, and Thursday, May 5, and will be played at Rice Lake and River Falls re_ spectively. Both contests are slated to begin at 5 p.m. 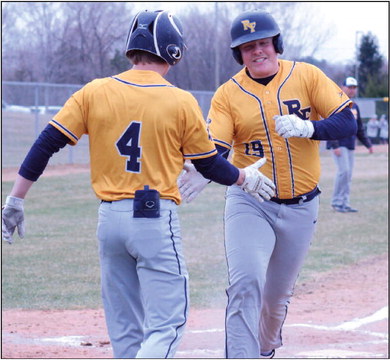