The Spring Valley Cardinals baseball team, now 5 3 overall and 5 2 in Dunn St. Croix Conference play, is in third place in the league standings and will spend the rest of the season chasing undefeated Elk Mound.

With less than a month left in the regular season, the Spring Valley baseball team has played approximately half of its Dunn St. Croix Confer ence schedule and for the most part has fared well against con ference opponents.

In their first meetings with Boyceville, Elmwood/Plum City, Durand, Colfax and Mon

feated (5 0). However, Spring Valley was swept in the season series against Elk Mound (6 0) and will chase the Mounders in the remaining weeks of the regular season in hopes of win

Although it will be hard to track down Elk Mound, it’s more than possible with past success against the aforemen tioned teams in the conference. Spring Valley has seven con ference games left, none of them against Elk Mound. With the experience and leadership of seniors like Tyler Bowman and Connor Ducklow, anything is possible.

The tough, gritty group of talented Cardinals was on dis play on Tuesday, April 26, at home against Mondovi. In that game, the Cardinals trailed early, but battled back to win 4 3 and continue climbing the conference standings.

Spring Valley’s aforemen tioned senior Ducklow got the start against Mondovi on Tues day afternoon. In the top of the first inning, Mondovi got a base hit single and then stole second base to get the runner into scoring position.

Two batters later, Mondovi hit a home run to deep left field to take an early 2 0 lead over Spring Valley. Ducklow got out of the inning with a groundout and a strikeout with out allowing any more damage on the scoreboard.

Despite trailing early, the Cardinals bounced back with a scoring barrage of their own. After a strikeout to start the in ning, Bowman hit a double to right center and then stole third base. Charlie Maier walked bringing Ducklow to the plate.

Mondovi’s throw to first base to try to pick off Maier was errant and allowed Bow man to score from third base to make it a 2 1 ball game. Maier advanced to second with Ducklow still at the plate.

That’s when Ducklow saw a pitch he liked, squared up the bat, and drove the ball down the left field line for a standup double, scoring Maier from second and knotting the game up 2 2. Ducklow then stole third and the next batter walked to make it a first and third situation for Spring Val ley.

More timely hitting by the Cardinals accounted for two more runs in the bottom of the first inning to take a 4 2 lead over Mondovi going to the top of the second. After an offen sively dominant opening frame from both teams, the game quickly turned into a pitcher’s duel.

However, Maier’s relief ap pearance on the mound proved to be successful, as he closed out the rest of the Mondovi lineup to secure Spring Val ley’s 4 3 win. After the game, head coach Brandon Walczak spoke about the win.

“We’re still trying to work out a few kinks, but we’re get ting to the point where we want to be,” Walczak said. “We do have some really good senior leadership on our team.”

After all of the scoring in the first inning, the game be came a defensive, grind it out kind of game that relied heav ily on those experienced lead ers on the field, particularly Ducklow, Bowman and Maier.

“It’s just one of those games where you have to grind it out,” Walczak said. “We’re getting into the part of the sea son where we’re going to be stacking games on with rain outs and we have pitch counts that we’re trying to manage to make sure that guys are eligi ble.”

While it would be nice to win every game by 10 runs and breeze through the regular sea son, Walczak stated that some times these gritty hard fought games are important for a team throughout the season.

“We kind of like games like this where the kids have to grind and have to stay mentally in the game, as opposed to some of those 10 run games where we can coast,” Walczak said. “Games like this benefit us more and give us a little more experience for some of those guys that aren’t always sure about making plays all the time. It’s fun and it gets your heart going.”

While Spring Valley has had its share of great victories against most of the teams in the conference, the two losses against Elk Mound were disap pointing for a team that has goals of winning a Dunn St. Croix Conference champi onship.

In that first meeting with Elk Mound on Thursday, April 21, Spring Valley had a 2 1 lead after three innings and held that lead until the seventh inning. That’s when the Mounders score two runs in the bottom of the seventh to walk it off against Spring Val ley.

Even with those losses to a strong Elk Mound team, coach Walczak said that their goal re

mains the same – to win a con ference championship for the 2022 season.

“Absolutely, our goal is to compete for a conference championship,” Walczak said. “I think every year our goal is to compete and be at the top if not in one of those top three spots. My goal at the beginning of every year is to get them prepared to be at the top if we can be. With a school as small as ours, I give credit to our kids. They’re always coming in getting extra ground balls, fly balls, getting the work in and building those skills.”

Spring Valley plays another slate of conference games the week of Monday, May 2, with games against Mondovi on Monday and Boyceville on Thursday. Both of those games are slated to begin at 5 p.m.

Spring Valley senior Tyler Bowman hits a double during the Cardinals’ home game against Mondovi. Bowman finished the game 2 3 at the plate with a run scored. Photo by Reagan Hoverman

Spring Valley senior pitcher Connor Ducklow throws one of many pitches during his outing at home against Mondovi on Tuesday, April 26. In that game, Spring Valley defeated Mondovi 4 3. Photo by Reagan Hoverman 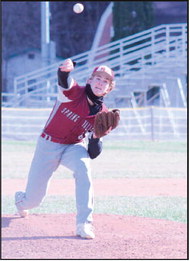