The Spring Valley softball program is adjust ing to a coaching change as former head coach Ron Cipriano stepped down and was replaced by Jane Borgerding as the new head coach on Monday, April 18.

There is no indication why Cipriano decided to step down from the coaching position. Re gardless, when Borgerding took over the reins as head coach, the team was 0 2 and had been limited in time on the diamond for games and practices because of the unusually brutal weather.

Since Borgerding took over, Spring Valley is 3 3, with wins against Colfax, Durand and Unity, and losses against Mondovi and Elk Mound twice. The 2022 stint as head coach isn’t Borgerding’s first time leading a softball pro gram.

When she began teaching at Spring Valley in 1992 93, she was the head coach of the lady Cardinals for nearly a dozen years. After many

years of leading the program, she decided to step down. She spoke about coming back to the pro gram.

“I was the head coach for 10 or 12 years,” Borgerding said. “I was out of it for a long time. When the head coach stepped down, they came to me and asked if I would consider taking it over for the next however many weeks they need it. I said sure.”

In the first game of the season, before Borg

feated Spring Valley 13 3 and controlled every aspect of the game. On Monday, April 25, after Borgerding took over, Spring Valley hosted Du

rand for the second match up of the year.

In that game, Spring Valley outplayed Du rand and was spraying the ball all over the field en route to a 13 9 victory. The Cardinals com piled 22 hits as a team as well as 10 earned runs. Borgerding spoke about her first weeks of coaching.

“They lost to Durand before I was here,” Borgerding said. “They lost 3 13. Our hitting has gotten us back into a lot of games. We’ve also had some good pitching from Maddie (Shafer).”

While some games have gone well like the aforementioned match up with Durand, others have struggled. In the Tuesday, April 26, match up at home against Mondovi, the Buffaloes proved why they’re one of the best teams in the conference.

After jumping out to a 6 0 lead through the first two innings of action, Mondovi continued to find gaps in the Spring Valley defense. In the top of the fifth inning, the Buffaloes exploded for 11 runs to take a 19 1 lead and end the game after five innings via the 10 run rule.

“They are an exceptional team, and they have a very good pitcher/catcher combination,” Borg erding said. “We didn’t hit the ball like we have in the last two teams. Their pitcher (Abby John son) is the top pitcher in the conference, and she was on today.”

With the loss, Spring Valley dropped to 2 5 in Dunn St. Croix Conference play this season. With less than a month left in the season, it’s un likely the Cardinals have time to turn it around and compete for a conference championship with teams like Elk Mound and Mondovi, two programs that are 6 1 and tied atop the stand ings.

Although the standings don’t look great, Borgerding and the coaching staff are working to make sure that the team gets better every day and they improve as much as possible before the end of the season. She spoke about the remain

der of the season.

“Our goal is to get better every game,” Borg erding said. “We’re going to work on the things that we see. We tell them that we want to see im provement on those things we notice. We need to keep hitting the ball. We can be good hitters when we keep our heads in there and do it. We’re going to keep getting better.”

The next game on the schedule for Spring Valley is on Thursday, May 5, at home against Boyceville. That contest will begin at 5 p.m. 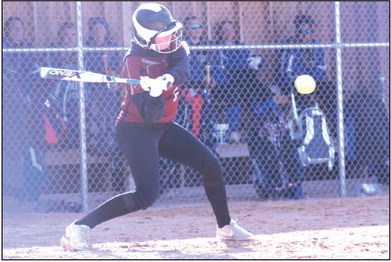