The thrill never gets old OUTDOOR

The weather we have been having makes it feel more like late winter but the calendar says that it’s turkey hunting season which waits for no one, including Mother Nature. Even with the real chill in the air, I was still all in on my turkey season. I couldn’t wait to get out there even if I had to deal with some freezing rain and snow.

I had some great action during the early part of my season and honestly, I could have filled my tag on the first day. The tom turkey that strutted into range tried to intimidate my jake decoy before turning and high tailing it. He was trying to keep up with a group of hens. Why didn’t I shoot? If I shot a bird on the first day of the season it would all be over much too quickly. Spending time in a turkey blind is similar to spending time in a boat: You just can’t do it enough.

I hunted every morning and had various degrees of success but the moment of truth came on day six. I was on my way into the blind when I came across something that stopped me in my tracks. There in front of what would have been my next step with my right foot was a fourpoint shed antler from a whitetailed buck. I couldn’t believe it. It’s hard enough to find those things when you’re looking for them but when I stumbled onto that one in the dark, I knew I had some pretty powerful mojo going for me.

I grabbed the deer horn and walked to the blind, arriving just in time to hear the first gobble of the day. Everything was coming up Dave.

I sat and listened to the woods wake up. That first gobble was followed by a second tom that never showed himself. The honk ing geese were next to sound off. I’m not sure where they were going but they flew so close I could hear their wings squeak. By the time the crows started cawing to their neighbors it was light enough to not only see but shoot if I had to.

I didn’t hear the toms fly down but I could tell when they gob bled that their position had changed. The closer tree gobbling tom now seemed to be further down in the valley and when the other tom gobbled, he sounded a little higher on the hillside. A few min utes and a couple of gobbles later, I could tell that the tom that was higher on the hillside was coming closer. I chirped out a cou ple of soft calls just to line him up with my location and let his curiosity bring him the rest of the way.

Without warning the tom turkey popped out of the brush mak ing his way towards me. As he closed the distance between us, I sat motionless and even though I have done this a few times be fore, I was still excited to be in that position. When that very mo ment stops getting my heart going a little faster, well then, I guess that will be the time to hang it up. As I slung that tom over my shoulder and headed towards the truck, I felt pretty good about my morning. That’s something else that will never get old.

Didn’t get enough Dave this week? Visit “Outdoor Trails and Tales with Dave Beck” on Facebook for photos and video of Dave’s adventures. You can share your own photos and video with him there as well, or by emailing him at [email protected] news Also, check out OTT content on Instagram @thepiercecountyjournal

I knew it was going to be good day when I stumbled onto this fourpoint deer antler shed in the dark on my way to the turkey blind. Photo by Dave Beck

On day six of my turkey hunting season is when I harvested this tom. The thrill will never get old. Photo by Dave Beck 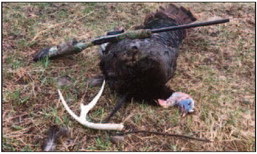