Tommy Thompson’s family may have saved him from a brutal primary that could’ve tarnished his legacy, insiders say.

And while it personally stings for him that he’s not running, they add, it also means the public will largely remember him going out on top after a successful run as University of Wisconsin System President.

As Thompson was getting ready to leave the system, he began publicly musing about the possibility of running for the ovce he'd held for 14 years. At the time, many thought it was just Tommy being Tommy. He’s the consummate politician who wants to be involved — and in the news. Many also believed Thompson’s family would never go along with the 80-yearold taking on another statewide campaign after losing the 2012 U.S. Senate race. As Thompson's flirtation with a run ramped up — including a trip to Mar-a-Lago to meet with former President Trump — the calculation kept going back to his family. And when Thompson pulls the plug on a possible bid, he makes it clear: The longest- serving governor in Wisconsin history wanted one more shot at his old job, but his family said no. He tells WisPolitics.com that he wanted to run, and Trump even encouraged him to get into the race.

But his wife, three children and their spouses, and his nine grandchildren were all opposed. “You need your family with you, and they weren’t going to be with me. I acquiesce to them. It’s that simple,” Thompson says.

As he weighed a bid, insiders considered the pros and cons of a Thompson campaign.

On the one hand, a segment of the GOP donor class wants to get away from the craziness and the “stop the steal” chatter and focus on a statesman-type candidate with a vision for Wisconsin. That’s the Thompson they remember and love, some note.

But the base, insiders add, is in a very diuerent position. Thompson was last on the ballot in 2012, when he lost a U.S. Senate race to Tammy Baldwin, who tagged him repeatedly as not being “for you anymore.”

In the four-way GOP primary, Thompson took home 33% of the vote, not exactly a dominating performance for someone who had won statewide ovce four times. And the base has shifted right even more since then.

Some wonder how Thompson would’ve navigated primary voters still fuming over the 2020 election and more concerned about loyalty to Trump than anything else. A Trump endorsement, some say, could have addressed at least some of that.

Still, some wonder if the Trump endorsement carries the same weight it once did, particularly with some of the chances he’s taken in crowded primaries.

And some Wisconsin insiders wonder how Thompson would’ve run with a Trump endorsement. His pitch is being a consensus builder while all the Trump base really wants is a fighter to clean up “the swamp.” Thompson might’ve been a strong general election candidate if he could have stitched together the GOP base with those who long for a Capitol that’s more focused on getting things done rather than partisan standous.

But it’s not clear he could’ve made it through the primary.

Now that businessman Tim Michels is in the race, insiders debate what he brings to the table. Can he snag a Trump endorsement? Will he get entangled by issues related to the work of construction giant Michels Corp.?

And just how much is he willing to spend to make a splash?

Insiders throw out a series of numbers they think it would take for the former U.S. Senate candidate to not only build back his name ID but take former Lt. Gov. Rebecca Kleefisch down a notch.

Insiders know Michels well. But he was last on the ballot in 2004, when he lost to then-U.S. Sen. Russ Feingold, by nearly 11 points when then-President George W. Bush lost the state to John Kerry by some 11,000 votes.

For more, visit WisPolitics. com The Capitol Report is written by the editorial sta at WisPolitics.com, a nonpartisan, Madison-based news service that specializes in coverage of government and politics and is distributed for publication by members of the Wisconsin Newspaper Association. 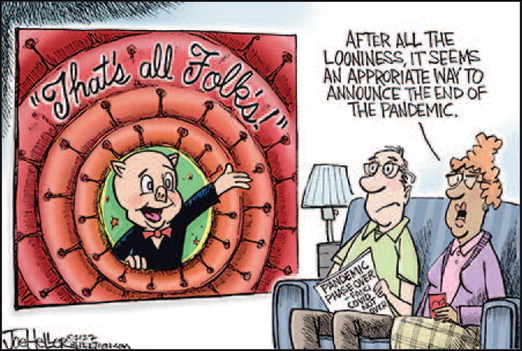