RIVER FALLS – River Falls is continuing to grow with developments long in the making .lling in, plus a new annexation in the works.

The River Falls Plan Commission voted unanimously to forward an ordinance to the River Falls City council regarding annex ation of 43 acres in the town of Troy. The ordinance would also change the future land use designation of the property from industrial to high-density residential.

The acreage is owned by Thompson Family LLC adjacent to Paulson and Radio roads. City Planner Emily Shively said the Plan Commission must consider two things when considering annexation: Is the property con tiguous to the city boundaries and is the proposed land use compatible with adjacent land uses? City sta say yes. "We have three dierent housing develop ers who are anticipating developing the prop- erties for residential uses," Shively said. The proposal set forth is to build a vari- ety of homes, including twin homes, rental townhomes, and multi-family apartment buildings.

The 2005 Comprehensive Plan designated those parcels for future industrial develop- ment, but that was prior to the city's Mann Valley acquisition of more than 200 acres. Sta recommends changing the land use from industrial to high-density residential, Shively said.

The city has not received any opposition to the annexation request, she added. The city will pay the town of Troy property taxes on the parcels as they are assessed today for .ve years, at a total of $30,000 per year. The roundabout will be taken into con- sideration and access will most likely be o Paulson Road; however, a concept plan has not yet been received from the developers, Shively said.

“To me it seems more suited for industrial than for residential, but I'm not in the housing market so I'm not looking for a house," said Plan Commission member Patricia LaRue.

Is this getting the city closer to closing its housing shortage gap, asked Plan Commis –

“I think this is getting us more of the type of housing we were severely lacking," Shive ly said. “I think we still need quite a bit more housing." Odeen asked if anyone has expressed in – terest in developing the land (in the town of Troy) to the northwest of these two parcels. The answer is no.

The city council will vote on the annex –

ation ordinance at its May 24 meeting.

Planner Sam Burns presented the Plan Commission with a resolution to approve the .nal plat for the Highview Meadows Seventh Addition for Kings Highway LLC. The de – velopment, which as been in the works since 2003, is the .nal phase of the development.

The addition will contain 28 single-family units with 2.7 units per acre (total of 10.32 acres). Westwood Drive will be extended and Overlook Court will be built as the infrastructure is constructed.

The project will be built on 5.75 acres with eight buildings and 70 units total. The build- ing sizes vary with three eight-unit, three 10unit, one 12-unit and one four-unit building. Each unit will have three bedrooms, an at tached two-car garage and driveway parking for two vehicles.

The developer intends to own and manage all buildings in both phases (112 units total). In addition, a homeowner's association will be formed to cover ownership and maintenance of shared infrastructure (i.e. private streets, utilities, snow removal, etc.).

The SIP will go before city council on May 24.

City Clerk Amy White said that much to her surprise, the Focus River Falls Pet Mayor contest was a huge success. More than 600 people registered on the engagerf.org website and Gordy Durow, a sugar glider, was elected River Falls' .rst pet mayor in April. Burns said they borrowed the idea from a city in Texas in order to increase engagement numbers on the Focus River Falls website. Focus River Falls is the update of three city plans: the Comprehen –

Gordy belongs to River Falls resident Hailey Durow. He won the tight race with 70 votes, which was an "electrifying, come-frombehind victory." Runners-up were Emmett the Bernese Mountain dog (67 votes) and Osiris, a wild hare with 52 votes.

Sugar gliders are palmsize possums; the tree-dwelling marsupials are native to tropical and cool-temperate forests in Australia, Indone –

• Comprehensive Plan  meeting May 19 will focus on goal and priority development • Bike & Pedestrian Plan – tours are planned for May, along with plan analysis

Powell Avenue will be close from River- side Drive to St. Croix Street for about one month due to water and sewer utility work.

The detour will direct trac to use West Division and Winter streets. Questions can be sent to City Engineer Todd Nickleski at [email protected] 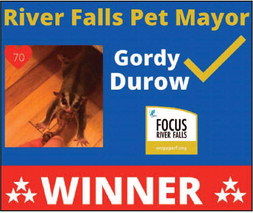