Ellsworth senior pitcher Urban Broadway throws a pitch during his complete _game 4_1 vic_tory at home against Prescott on Tuesday, May 3. Broadway gave up zero earned runs in the game while striking out three Prescott batters. ________________________
News
Ellsworth baseball begins ‘Redemption Tour’ with 4-1 win over Prescott

After the Ellsworth Pan _

_ 7 on the road against Prescott on Friday, April 22, Ellsworth head coach Brandon Voelker described the game as sloppy. The second meeting of the season on Tues _ day, May 3, was anything but sloppy for Ellsworth as they cruised to a 4

_ 1 win to begin their “Redemption Tour.”

The win over Prescott to begin the second round of con

ference matchups for the sea

_ son was likely just what the doctor ordered for Voelker’s squad. Despite it being only the second win of the season for the Panthers, the game showed what Ellsworth is ca

pable of on any given after

“These boys know what they’re capable of and we’ve shown what we’re capable of,” Voelker said. “We’ve labeled this second half of the year as a redemption tour. We’re going to give everybody everything that we’ve got, and we’ve got nothing to lose.”

The redemption tour is cer

_ tainly off to a hot start with the win over Prescott. In that

game, Ellsworth wasted no time getting on the board. In the bot tom of the first inning with a runner on second, senior Tanner Pechacek hit a double to the right field gap to take a 1 0 lead after the opening frame.

For Voelker, the discipline and timely hitting at the plate was a key to success against a well coached Prescott Cardinals team. He spoke about the approach at the plate and how that changed the outcome compared to the first meeting with the Cardinals.

“Our big thing all year has been to go after fastballs, and tonight, we went after them,” Voelker said. “We had a couple of guys that maybe didn’t have the best night at the plate, but over all, I really liked our approach. We’ve been preaching to go after fastballs. Teams will throw them and that’s what we want to hit.” While the approach at the plate was solid, the star of the game was senior pitcher Urban Broadway, who pitched a complete game without giving up an earned run. His performance included three strikeouts and overall control which is rarely seen in high school baseball.

“That’s what we expect of him and we hold him to a little bit of a higher standard,” Voelker said of Broadway. “He has been a three year starter, technically because of the COVID year, but he would be a four year starter.”

Broadway’s experience and poise on the mound have been a constant throughout his tenure on the varsity roster for the Ellsworth Panthers. Even though this is his senior season, his tal ent will likely carry him to the collegiate level.

“He is a senior with a lot of experience and works his tail off in the offseason and is looking to play college ball somewhere,” Voelker said. “If you’re going to throw (like he did against Prescott), man, people are going to be calling me left and right. He just threw an outstanding game tonight.”

While Voelker was happy with his team’s performance on Tuesday evening, Prescott head coach Jeff Ryan had less to cel

ebrate. He spoke about the 4 1 loss in the Highway 10 rivalry game.

“When you get down, it’s tough to recover, especially when a kid is throwing a nice game,” Ryan said. “He deserved to win the game. They got big hits and we didn’t. They took advantage of things we did defensively and to their credit, they took advan tage.”

For coach Ryan, the intensity and energy from his team were lacking. He spoke about lacking energy and his coaching style, which has never been yelling or screaming at his players.

“I’m not a screamer or a yeller and I never have been,” Ryan said. “You can be business like and still play with intensity. I’ve coached a lot of teams that haven’t been yellers, but they’ve been intense and there just wasn’t any today.”

Prescott’s lack of intensity and inability to take advantage of scoring opportunities was the biggest difference in the game. Even with Broadway’s excellence on the mound, Prescott missed timely opportunities at the plate and in the field.

The Ellsworth Panthers’ redemption tour has begun, and the goal is to win some of those close games against Middle Border Conference opponents that they lost in their first meetings of the year. Unfortunately for the Panthers, their redemption tour in cluded a Thursday, May 5, game against Altoona – the top team (9 0) in the conference.

The Railroaders defeated Ellsworth 13 3 in blowout fashion, similar to what Altoona has done to the entire Middle Border Conference this season. The Panthers look to get back on track with an afternoon game on Friday, May 13, on the road against Somerset. That game is slated to begin at 5 p.m. 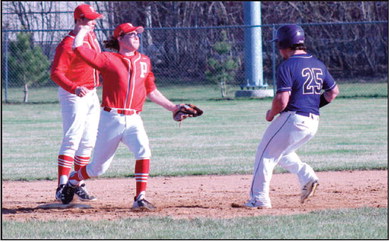