In one of the biggest track meets of the year at the New Richmond High School on Fri day, May 6, spectators in the crowd and even fellow com petitors could be heard talking about wanting to stay at the meet longer just to see the Ellsworth 4×100 relay run.

For those who decided to stay, they certainly got to see a show. In that 4×100 meter relay, the Ellsworth Panthers established a new school record with a time of 43.33 seconds, toppling the previous school record which was set last season at the state meet in La Crosse.

“We have always known that if this group can get around the track, they are one of the toughest teams in the state to beat,” Pechacek said. “On Friday, we had great hand offs and they were able to put their abilities on full display. They have been fast all year and this was one of the only times we had them run to gether. We’re excited about what they can do.”

The group of Hines, Janke, Quade and Grand are no strangers to the bright lights and the big stage. All four of them have been on at least one state level stage, including the Division 3 State Championship football game at Camp Randall this fall in Madison against Catholic Memorial.

In addition to that, Grand, Quade and Hines were all on the state championship relay squads for Ellsworth last sea son at the state track and field meet, in addition to one gradu ated senior, Shane Lange, who is now a football player at the University of Wisconsin La Crosse.

With such an illustrious background for all of the stu

dent athletes involved, as well as a strong history of the pro gram, it’s no surprise that there are lofty goals for the remain der of this season for the relay group and the team as a whole.

“Their goal from the start of the season was to not only re peat as state champs but to try and compete for the overall team state championship,” Pechacek said. “We finished last year’s meet in the top 10 and they realized how close we were and have been working on individual events to try and get more people to state.”

Winning events at the state meet is a great way to accumu late points in the quest for an overall team state champi onship and for Ellsworth, that

begins with the relays. The Panthers’ top ten finish at state last year was in large part be cause of strength in the 4×100 and 4×200 relays.

“We set school records in the 4×100 and the 4×200 at the state meet last year,” Pechacek said. “Last year we were stronger in the 4×200 and were ranked in the top three in that race most of the season. We came on in the 4×100 later in the year. We had a great senior in Shane Lange helping to so lidify that team and this year, Jack (Janke) came out to try and do the same and earn a state medal.”

According to Pechacek, based on how the team per

formed last season, the Pan thers will have to add approximately 45 points if they want to compete for a state title this season. The relays will again be strong, but other areas of the roster will have to im

prove to make a run at a cham pionship. Part of that is having individuals chase better times and school records which will inevitably lead to success down in La Crosse.

meter school record,” Pechacek said. “He has been chasing that for the past two years. Bo Hines would like to challenge the boys’ long jump record and I feel that Ashten (Quade) could compete for the 400 record.”

While the 4×100 relay is likely at the height of its powers right now, the 4×200 relay group still has some time to shed time and can poten tially challenge the school record as well. That group simply hasn’t had enough chances to run together, according to Pechacek.

“As a group, they could definitely go after the 4×200 record,” Pechacek said. “We have not run this group in this event much due to injuries and wanting them to be able to go after their in

Other notable Ellsworth results include all four runners postng times under five minutes in the 4×1,600 meter run. That group was led by Alex Pazdernik, who posted a time of 4:37.22. Jake McCabe also posted great results in the long jump and had a strong showing in his 200 leg of the medley relay.

As for the girls’ side, sophomore Nyla Wil ford continues to impress in the girls’ shot put event. At the New Richmond meet, she posted a ninth

place finish and competed well against some of the biggest schools on this side of the state, including Eau Claire, New Richmond, Rice Lake and River Falls.

place finish out of 15 total teams at the meet in New Richmond.

The Prescott Cardinals also competed in the New Richmond track meet on Friday afternoon. Both the boys’ and girls’ Prescott track and field teams earned eighth

place finishes at the meet.

The girls also posted a strong score in the

place finish in the shot put event with a throw distance of 35’9”.

As for the Prescott boys’ track and field team, the relay events also had strong showings. The Cardinals earned fourth and third place finishes in the 4×200 and 4×400 meter relay events re

For the first time potentially all season, sen

The River Falls track and field team earned a third

place finish on the boys’ side and a fourth

place finish on the girls’ side at the New Richmond meet on Friday, May 6.

Starting with the boys’ results, there was a lot to celebrate for Wildcats fans. The 4×100 meter relay group earned a second place finish, trail

place finish. The group of juniors Jordan Karras and Jacob Gilbertson and seniors Samuel Rixmann and Nathan Weick finished less than half a sec

The same aforementioned relay group also earned a second place finish in the 4×200 meter relay, trailing New Richmond by less than a tenth of a second in a photo

finish for the vic

As for the girls’ side of events, the 4×200 meter relay group of senior Elise Frisbie and juniors Brooklyn Silloway, Abi Banitt and Re

River Falls senior Madeline Doerre finished in a tie for second place in the girls’ high jump with a height of 4’10”. The outstanding show

ings in every relay event, as well as solid mid

place finish at the New Richmond meet on Friday afternoon.

Up next for the Wildcats is a meet on Mon day, May 16, on the road at Menomonie High School. That meet is slated to begin at 3:30 p.m. 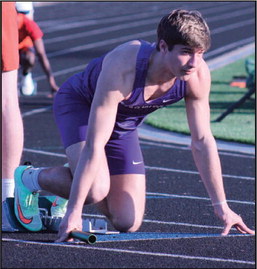 Ellsworth junior Bo Hines gets into his blocks for the 4×100 meter relay at the New Richmond track meet on Friday, May 6. His efforts in the first leg of the relay helped put the rest of the team in a position to break the school record. Photo by Reagan Hoverman