Ellsworth senior wrestler and active member of the Na tional Guard, Ivan Veenendall, was awarded the Character & Leadership All American Award by the National Wrestling Coaches Association and the United States Marine Corps, making him one of 55 recipients in Wisconsin in 2022.

Veenendall is the second Ellsworth wrestler to win the award in the last three years, joining Charlie Stuhl, who was recognized in 2020. To be eli

gible for the award, the stu

dent athlete must meet the criteria which include depend ability, judgment, endurance, initiative, tact, integrity, un selfishness, loyalty and courage.

In addition to those specific traits, the National Wrestling Coaches Association provided additional insight as to what it takes to be selected for this prestigious award.

“The awards recognize wrestlers who have demon

strated excellence in the class room,” the NWCA stated in a

press release. “The Character & Leadership All American Award for athletes who have shown exceptional leadership skills and are of sound charac ter.”

To be eligible for the award, the student must also be se lected by their respective coach who then applies them for the award. Ellsworth head wrestling coach Mark Matzek spoke about what it means to win this award.

“This award is significant because it highlights wrestlers that we as a society can rely on to improve our communities,” Matzek said. “We need strong willed men of character to have a country that we can be proud of. That is why the United States Marine Corps has part

nered with the NWCAC to rec

Veenendall was not only ex cellent in the classroom, but he was also a standout on the wrestling mat throughout his senior season for the Panthers wrestling team. Matzek spoke about Veenendall and what makes him a special individ ual.

sity record as a junior to win ning 34 matches and placing at state as a senior because he en compasses the character traits this award represents,” Matzek said.

peted at a high level through out his senior year and became one of the best wrestlers in the state in his respective weight class.

“Nobody worked harder than him in the wrestling room or the weight room,” Matzek said. “He led his teammates by setting the bar high. He is a man of few words, but as the saying goes, ‘actions speak louder than words,’ this is true for Ivan (Veenendall).”

While Veenendall may not be a man of many words, his positive actions have spoken volumes, both for the Ellsworth Panthers wrestling program and the larger Ellsworth community. 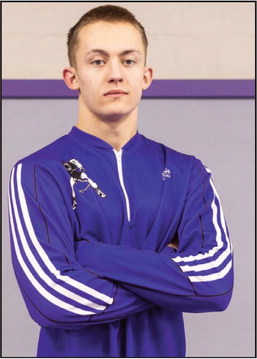