River Falls sophomore Will Benedict looks down the fairway as he prepares to hit his tee shot during a meet earlier this season. Benedict has consistently dropped his scores throughout the season and shot his best round ever at White Eagle Golf Club on day two of the Border Battle Tournament with a 78. Photo by Reagan Hoverman
News
RF boys golf improving through consistency, depth

The River Falls High School boys golf team has seen steady improvement through out the season, as was high lighted at the annual two day Border Battle Tournament, which was played at the Troy Burne and White Eagle Golf Clubs on Wednesday, May 4, and Thursday, May 5.

While junior Matthew Mar sollek and senior Trey Timm continue to post solid scores at every tournament, the three, four and five slots on the var sity roster have improved throughout the year. The steadily decreasing scores by the back half of the roster have completely changed what the Wildcats will be capable of ac complishing as a team this sea son.

Perhaps no player has firmly established himself in the middle of the varsity roster than sophomore Will Benedict, who continues to post lower and lower scores, occasionally challenging the rounds of Mar sollek and Timm at the top of the team.

Benedict’s high ceiling as a player was on display during the second day of the Border Battle at the White Eagle Golf Club Thursday afternoon when he posted a round of 78, tied with Timm for the best score on the team. River Falls head coach Tim LaVold spoke about Benedict’s development.

“Will Benedict is an exam ple (of improving scores) with the 78 he shot on Thursday at White Eagle,” LaVold said. “That is his best score ever in any situation and he did it on a very difficult course. I would say all of our golfers are play ing very consistently right now.”

Perhaps the biggest change in scores for River Falls has been made through course management and smart golf. According to LaVold, his ros ter has been getting more tour nament reps as the season is in full swing, pun intended, and that has significantly altered the Wildcats’ scores.

“We are playing smart golf,” LaVold said of his var sity boys. “We are making good decisions and we are playing within our abilities. Matthew (Marsollek) and Trey (Timm) are both very good golfers who are working on their ability to turn that talent into really good scores. Will (Benedict), Jacob (Landgraf), Ethan (Campbell) and now Aidan (Carufel) are all getting comfortable with competitive play and their improved scor ing is showing.”

Official results from the two day Border Battle Tourna ment include River Falls’ team score of 329 after the first day of action at Troy Burne. That team score put River Falls in sixth place out of 14 teams in their day one flight and 13th place overall. Individual Wild cat scores include Marsollek’s 73, Timm’s 82, Campbell’s 84, Benedict’s 90, Landgraf’s 90 and junior Aidan Carufel’s 91.

After a day at Troy Burne, River Falls finished out day two of the tournament at White Eagle Golf Club with a total team score of 320, which slot

ted the Wildcats into a fourth place finish in their flight of teams at White Eagle. Individ ual scores include Timm’s 78, Benedict’s 78, Marsollek’s 82, Landgraf’s 82, Carufel’s 83 and Campbell’s 84.

“I believe we finished in the middle of the pack (two day combined team score) with 30 teams there,” LaVold said of the Border Battle Tournament. “I was very happy with our play during this event. I don’t worry so much about how we are doing compared to Min nesota teams. A lot of those teams are huge schools that don’t always bring all their best players to this event.”

LaVold spoke of the consis tency at the top of the roster with Marsollek and Timm, as well as how the team has been consistently lowering scores throughout the season.

“Matthew (Marsollek) and Trey (Timm) are definitely our lowest scoring golfers,” LaVold said. “The 73 that Mar sollek shot at Troy Burne was a really good round of golf. Timm has been battling his swing a little and came out and posted a solid 78 at White Eagle which was tied for the fifth best score of the day there. Every one of our golfers has been scoring within their range consistently with some exceeding their range.”

While good scores are im portant, LaVold stated that the team is also a close group of guys that like to have fun and genuinely enjoy being around each other, which certainly makes practice and competi tion more enjoyable. He also spoke about how the depth on the roster has helped the team produce better scores.

“Our team is really having a lot of fun right now. It’s a great group of guys,” LaVold said. “The nice thing this year is that we have a little more depth than we had last year. Our three, four, five, six and seven slot players are all capable of shooting good scores within their scoring range, so if any one has an off day, someone else usually helps out to im

With less than a month re maining in the regular season, River Falls – especially the lower half of the varsity roster – is hitting its stride and is be coming a team that has a real chance to get through regionals and sectionals as a team.

Up next for the Wildcats was a conference meet on Monday, May 9, at Turtleback Golf Course in Rice Lake. That meet was slated to begin at 3 p.m.

Ellsworth results at the Border Battle On the first day of the Bor der Battle at the White Eagle Golf Club in Hudson, the Pan thers posted a team score of 356 which put Ellsworth in 12th place out of 15 total teams in their respective day one flight.

On the second day of the Border Battle Tournament, Ellsworth posted another 12th place finish out of the 15 total teams with a total score of 349. The Panthers improved their total team score by seven shots. Most notably was Wit tenberg’s 81, five shots better than his day one 86.

Other individual results in clude Westerberg’s 89, White’s 89, Young’s 90, Anderson’s 97 and Oricchio’s 99. Overall, Ellsworth was one of the smallest schools at the event which featured multiple major Division 1 golf programs from Wisconsin and Minnesota.

The next meet on the sched

ule for Ellsworth was on Mon day, May 9, at the Ellsworth Country Club for a Middle Border Conference meet. That match was slated to begin at 2 p.m. 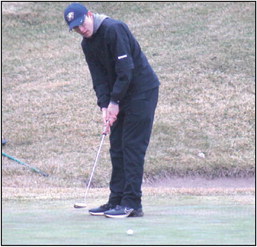 River Falls senior Trey Timm rolls a putt during a meet ear lier this season. Timm has been a consistent performer for the Wildcats this season, and his score of 78 at White Eagle con tinued to make him one of the top performers on the team.Photo by Reagan Hoverman