This Memorial Day will mark the seventh annual Memorial March for Them from Red Wing to Hastings, Minn., along the Great River Road.

Hastings resident Tom Wright, the man who started the march back in 2016, said he felt the need to do more to remember veterans, and build awareness around the holiday. Wright is a veteran himself and served in the military for seven years.

In the summer of 1998, Wright joined the army after just graduating from high school. He was stationed at Fort Benning in Georgia and was active duty for three years. Wright said he rode in helicopters and did all kinds of “fun, G.I. Joe stuff.” He left active duty to pursue his education and remained in the Minnesota National Guard for four years out of West St. Paul.

On Memorial Day in 2015, Wright was heading home from the gym when he felt a calling to do more to honor veterans who died in service. He said another part of it was that society seemed to forget the reason for the holiday, and view it as just a day off work.

“I’ve never been in harm’s way, but I’ve known quite a few guys that have, and unfortunately a few that didn’t make it back,” Wright said. “The idea popped into my head to do a walk. Then I thought, well, where could we walk? The Great River Road that goes between Red Wing and Hastings is scenic, and I thought that’d be perfect.”

The trail between the two towns is 28 miles long. Wright said he thought it was a doable stretch.

“We had done 30mile marches in the military,” said Wright. “When you’re walking along the road with your weapon and gear and all that to build up endurance, they call it a road march. So, I thought I’ll call this the Memorial Day March for Them.”

People who want to participate must register at marchforthem. org. The event can also accept donations through the website, as well as sponsorships. Wright said that sponsorships can be as little as $50.

On Memorial Day, the group will meet at the Hastings American Legion at 4:45 a.m.The Hastings Bus Company has provided a shuttle to the start of the walk, and all participants receive a Tshirt.

Wright said the event is free and open to all, including nonveterans. Children are welcome but must be accompanied by an adult. Anyone who signs up can send in a photo of someone they know who died in service.

“We have honor markers along the route with pictures, names and the date they were killed with an American flag sticking out of a post to help motivate us along the way and remind us of who we’re walking for,” said Wright.

The walk is an allday affair and ends in Hastings around 6 p.m. Wright said this year the public is invited to a celebration at the finish. The 34th Infantry Red Devil Rock Band will be playing cover music at the Hastings Rotary Pavilion at 5 p.m., followed by a brief program at 6 p.m.

According to Wright, there is great route support along the way. Volunteers provide food, water and additional help if needed. He said they encourage everyone to finish the walk, but if someone is unable to, route support will assist them with a ride.

Katy Lindberg is a friend of Wright’s and has volunteered and donated to the march with her husband each year. The Lindberg’s typically have a roadside support station at mile post 16, where they prepare food, chairs, and washcloths for marchers. The food options are weather dependent.

“My cousin’s husband lost several veteran friends about 15 years ago. Just seeing how it impacted him and their family, I can’t express enough gratitude for these people. This is the least I can do,” said Lindberg.

Lindberg said she would encourage people to witness the last mile when the marchers come over the bridge and down into Hastings.

“I cry every year. It’s a great feeling and a fantastic community event,” said Lindberg.

The last two years had smaller groups due to the pandemic. Wright said this year, they hope to get 30 participants. The march is rain or shine and Wright said they have walked through extreme heat and chilly weather. He said: “It’s nice to see everybody come together for a good cause and recognize those that deserve all the recognition for their service to our country and for making the ultimate sacrifice.” 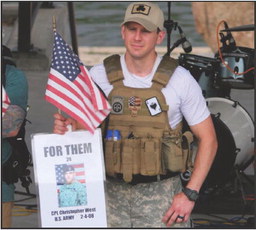 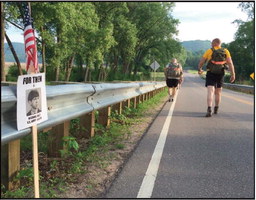 Josh Hanson, a marcher, takes part in the Memorial March for Them’s inaugural walk on Memorial Day in 2016. Photo courtesy of Tom Wright