2 at home against Ellsworth, the Prescott Cardinals softball team scored eight unanswered runs to regain the lead and secure a victory on senior night on Tuesday, May 10, at the Jackie Riley Softball Complex in Prescott.

The game on senior night against the rival Ellsworth Panthers carried a lot of weight for the lady Cardinals. For Prescott, it was a chance to regain a share of first place in the Middle Border Con

That shocking Baldwin Woodville loss opened the door for Prescott to once again climb the conference standings. The Car

dinals took advantage of the opportunity, as they defeated Ellsworth 10

4 for the season, including an

tle,” Johnson said. “We always get their A game. They beat us (earlier this season), and I think they’ve improved tremendously. For us to get down and chip away, it’s a credit to our girls for never giving up.”

While getting a bit of revenge against Ellsworth was certainly on the minds of the Cardinals, the importance of winning the game and moving up in the conference standings was the larger

“That’s a monster win for us,” Johnson said. “If we lose (to Ellsworth), then we’re behind the 8 ball again. We’ve put our

selves in the right position going into Thursday.”

While the game ended favorably for Prescott, the game cer tainly could have gone Ellsworth’s way. After Prescott scored a run in the bottom of the first and third innings to take a 2 0 lead, Ellsworth strung together a strong top of the fourth inning.

The Panthers’ scoring barrage began with junior Kallie Beissel reaching first base on an errant throw from Prescott’s infield. After a steal and a flyout by the next Ellsworth batter, the Pan thers strung together two consecutive singles to load the bases with only one out.

That’s when Ellsworth sophomore Molly Janke ripped a bases clearing double to deep center field to put three runs on the board for the Panthers, taking a 3 2 lead. After an infield single, senior Brianna Maurer hit a two RBI single up the middle to take a 5 2 lead going into the bottom of the fourth inning.

Leading the charge for Prescott was senior Grace Franco, who went 2 4 in the game and had three game changing RBIs that broke the game open. While Johnson was happy with how his team responded to an early deficit, Ellsworth head coach Kenzie Diercks felt like the Panthers let one get away.

“These girls are extremely capable of competing at a high level, but when things go wrong, we let it snowball,” Diercks said. “I think this game was a testament that we’re beatable and they’re beatable – it can go both ways. They’re a great team, but I think in this case, we had far too many errors.”

While Ellsworth struggled to be consistent throughout the game, Prescott was as consistent as it has been all season. The Cardinals scored in five of six possible innings and were defen sively solid throughout the contest, registering only one error in the 10 5 win. Johnson spoke about his team’s consistency and season long issues with bunting.

“We have that (consistency) capability because we’re such a good hitting team, but we have been an inconsistent hitting team this year,” Johnson said. “One thing we’re frustrated with is our bunting. We haven’t been successful with it and it has us worried, it’s not like we’re not working on it.”

While bunting has been an issue throughout the season, win ning games – for the most part – has not. With the win, Prescott moved into a share of first place in the conference standings with Baldwin Woodville (8 2) with a large game looming on Thurs day, May 12, when the two teams meet in Prescott.

“They open the door again, and give credit to our conference,” Johnson said. “From top to bottom, we’ve got five or six teams in our conference that are capable of beating anybody. Again, it makes Thursday (against Baldwin Woodville) that much more fun. We will see what we’re made of.”

Johnson previewed the game against Baldwin Woodville and what his girls need to do to get a win in that game. He stated that the most important part of the game will be putting balls in play and forcing the Blackhawks to make plays defensively.

He stated that they didn’t do enough of that in their first meet ing of the year and that it was going to be critical to any success in their second match up. 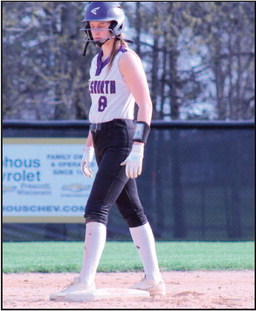 Ellsworth sophomore Molly Janke stands on second base after hitting a basesclearing double that gave Ellsworth a 3 2 lead in the top of the fourth inning. Photo by Reagan Hover-man 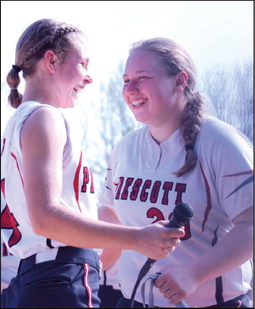 It was all smiles for Prescott junior Maddie Reiter and senior Liz Rohl on senior night on Tuesday, May 10. Photo by ReaganHoverman