Prescott junior pitcher Taylor Graf stands in the circle waiting for the pitch signal from catcher Leah French during the Cardinals’ 31 home game victory against BaldwinWoodville on Thursday, May 12. In that win, Graf pitched all seven innings, struck out seven batters and allowed only one earned run.Photo by Reagan Hoverman
News, Sports
Prescott softball topples Baldwin-Woodville, leads MBC standings

In Prescott softball’s most important game of the year, the Car

dinals rose to the occasion and defeated Baldwin Woodville 3

2 in Middle Border Conference play, placing Prescott atop the conference standings with less than one week remaining in the regular season.

nificance of the victory at home against the Blackhawks of Bald

Woodville. After the game, he spoke about how it’s one of Prescott’s biggest wins in years.

“Hands down the biggest win of the year and one of the biggest wins we’ve had in the last two or three years against one of the best programs in the state,” Johnson said. “We’ve talked so many times about taking advantage of opportunities and we got some crucial hits, put the ball in play and made every play defensively today.”

The Cardinals’ performance in the game on Thursday after

noon against Baldwin Woodville was a complete 180 degree turnaround compared to how they played in their first meet of the year on Thursday, May 5, a game that Prescott lost 0

In that game, Prescott failed to make any hits in crucial situa

tions, made mistakes defensively and didn’t bring any energy. The home victory against the Blackhawks saw critical hits at the most important times, defensive excellence – especially by senior third baseman Liz Rohl – and a pitching performance that ce

mented junior Taylor Graf as one of the best pitchers in the state.

The Cardinals’ offense wasted no time getting out to an early lead. After a three up, three down top of the first inning by Graf, Prescott executed small ball to perfection. Junior Izzy Matzek reached first base on a sharply hit ball to short.

A sacrifice bunt by senior Ari Temmers moved Matzek to sec ond base. That’s when Rohl stepped up to the plate and blasted an RBI double down the left field line which scored Matzek from second base.

Prescott took a 1 0 lead into the bottom of the third after a scoreless second inning and another excellent half inning by Graf. With two outs to start the inning, Rohl began the Cardinals’ of fensive attack with a single up the middle. Senior Maddie Miller followed suit with a single of her own and so did senior Grace Franco, who scored Rohl from second base on a close play at the plate.

Johnson spoke about how happy he was with the performance his girls put together in the biggest game of the season against a program that went to the Division 2 state championship game last season.

“Taylor (Graf), she was just lights out today,” Johnson said. “Our freshman catcher (Leah French), she hasn’t given up a passed ball in the last six or seven games. Nobody even tries to steal on her. That goes unnoticed. She doesn’t throw anybody out, but it’s because nobody is going to try to steal on her.”

It seemed as if everything went well for Prescott against Bald

win Woodville. The Cardinals had been struggling with bunting successfully for nearly the entire season. Against the Blackhawks, bunting was critical in scoring the first run of the game which gave Prescott momentum early. Rohl’s excellence was also a driving factor in the victory.

“We got a couple of bunts down today and our execution was great,” Johnson said. “Liz (Rohl) is an unbelievable person and player, and she leads us. She is locked in and she has done a hell of a job doing that for us. She played a great game all around.”

The Prescott offense was good, and the defense was great, but nothing was more outstanding than Graf’s complete game per

formance against Baldwin Woodville. In her seven innings of work in the circle, Graf allowed only four hits, one earned run and struck out seven batters for the win. She spoke about what was working for her in the win against the Blackhawks.

“My riseballs were on point today. I didn’t really miss one,” Graf said after the 3 1 win over Baldwin Woodville. “They were swinging at all of them and I kept throwing them. It felt really good.”

Graf spoke about having confidence in herself, knowing that she has pitched in a lot of big games and has helped her team get to past state championship games. She also highlighted what it’s like to play with an excellent defense behind her.

“It’s unbelievable (having this kind of defense),” Graf said. “Not every team gets to have this kind of defense. It’s great and I know that I can count on them all of the time. Leah (French) is also a great catcher. She catches everything and is always where she needs to be.”

Graf spoke about how big the win against Baldwin Woodville is and what this team is capable of moving forward. According to Graf, this is a special group that is capable of significant post season success.

“This win is huge,” Graf said. “Now, we’re in the driver’s seat for the conference championship. I think we can make it to state this year. I have a lot of confidence in us and this team is capable of so much. We just have to have each other’s backs like we al ways do.”

After the win against the Blackhawks, the Cardinals continued their streak of wins with victories against Amery, St. Croix Falls and St. Croix Central to improve to 17 4 overall and 11 2 in Mid dle Border Conference play.

The Cardinals have secured – at the very least – a share of the Middle Border Conference Championship. Prescott has a chance to win it outright, which it could do on Monday, May 16, with a victory on the road against Somerset. That game is slated to begin at 5 p.m. 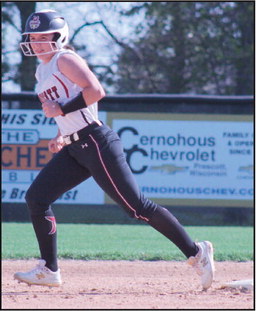 Prescott junior Izzy Matzek stands on second base during the home game against Baldwin Woodville. Matzek helped get Prescott on the board early with her leadoff single to start the bottom of the first inning. Matzek later scored from second on a Liz Rohl double to left field.Photo by Reagan Hoverman