The Prescott High School track and field team had one of its best meets in school history at the Stan Barr Relays track meet at the New Richmond High School on Friday, May 6, which included breaking six school records and ushering in a new era of Cardinal track and field.

For Emily Calabrese, who coaches the team with her husband, Carl Cal abrese, the Stan Barr Relays at New Richmond was one of the most excit

ing days in their six season tenure with the Cardinals’ track and field program.

Coach Emily Calabrese spoke about the track meet in New Rich mond and what that historic day was like from her point of view.

“Our kids absolutely exceeded ex pectations at New Richmond,” Emily Calabrese said. “It was very fun to watch them break record after record throughout the day, especially since records were broken in so many dif ferent event areas. Our throwers, sprinters and distance kids all had record breaking days, which made the entire team excited and proud.”

While breaking any school record is an exceptional accomplishment, perhaps none was greater than the boys’ 4×100 meter relay group, which broke a record that had not been touched since 1985. Calabrese spoke about that group, what makes them special and their new record of 44.20 seconds.

“These boys have overcome a lot as a group over the past year,” Cal abrese said. “They are made up of mostly senior state returners and they have big goals this year. Breaking a record previously set in 1985 was ex tremely rewarding for them. Coming into the season, we weren’t sure if we’d be able to do it, but quickly re alized that it was possible and chipped away at it over the past couple of months.”

The 4×200 meter relay group of Stanton, Russell, Peterson and Bier brauer, which also established a new school record, was in a perfect posi

tion to set the record in New Rich mond because they raced against much larger schools that pushed them to perform at their highest level.

For Calabrese, the surprising part about the 4×200 group wasn’t that they broke the record: it was by how

much they broke it. Instead of a time in the 1:32 range, the boys posted a time of 1:31.66. Other notable records were broken in the lone chance the team received each season, such as the hurdle event, of which both the girls’ 100 and boys’ 110 meter records were broken with times of 58.84 seconds and 1:03.99 respec tively.

“These are two groups of kids who have worked extremely hard this season to better themselves in their event,” Calabrese said. “Each group had at least one senior in it, which made it a lot of fun for them to leave their marks on Prescott track and field in this way. This event is only run at New Richmond each year, so there’s only one chance to break it each season. We’re so proud of them for working for this moment and making it happen in the one shot they had.”

“This group consists of three seniors and a freshman,” Cal

abrese said of the girls’ thrower’s 4×100 meter relay. “Throwers tend to have a lot of camaraderie, which makes it fun for them to be able to hold this record together. This event is often a fan fa

vorite and isn’t run very often throughout the season.”

For the boys’ 4×1,600 meter relay, the track meet at New Richmond was a chance at redemption and a chance to rewrite the history books, which they did with a new record time of 19:23.15. The group of Loucks, Zerneke, Schommer and Ko rfhage, all involved in the cross country season in the fall of 2021, had a heartbreaking end to the season.

The boys’ cross country team missed out on going to state by one point. Since then, they’ve been practicing their distance run ning and the results have been on display throughout this track and field season. Calabrese spoke about this group and their new established record.

“These boys rallied together to make sure that the spring could make up for any heartbreak felt in the fall,” Calabrese said. “The best part about this team is that there aren’t only four of them who could be on it. Junior Matthew Lynes runs with these boys every day and is right there with them when it comes to mile times.”

Calabrese stated that even with the seniors graduating after this season, they will still have chances in the future to reestablish the record because of the depth that Prescott has in that event. She spoke about the possibility of some of the new established records being broken in the future, potentially even this season.

“The shuttle hurdles, 4×1,600 and throwers relays won’t be run again this year,” Calabrese said. “However, if the boys’ 4×100 and 4×200 go as far as they can in the postseason, they have a very good chance to re break both of their records, possibly mul tiple times.”

Based on the season that the team has had, there is no question that this is one of the most talented teams in recent memory. Cal abrese spoke about how special this group is and what they’re capable of.

“This is an extremely special group of athletes,” Calabrese said. “They can achieve a lot at the conference, regional, sectional and state levels this year. I look forward to seeing them continue to push and support one another as they set higher and higher goals for themselves.” 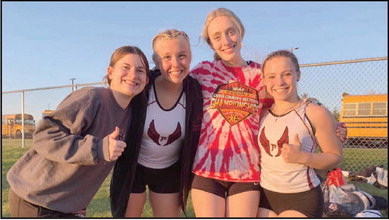