A group of pro-choice supporters gathered in Veterans Park in downtown River Falls on Saturday, May 14 for one of hundreds ofBans O Our Bodies rallies across the nation.Photo courtesy of Cheryl Maplethorpe
News
Protesters gather in RF for Bans Off Our Bodies rally

RIVER FALLS – About 40 people gathered in Veterans Park Saturday, May 14 for a Bans O Our Bodies rally to oppose the Su preme Court’s possible elimination of legal and safe abortions. The rally was one of 380 demonstrations for abortion rights planned nation-wide Saturday after a draft Supreme Court opinion that would overturn the 1973 Roe v. Wade decision was leaked.

Featured speaker Alison Page, CEO emeritus of Western Wisconsin Health, spoke at the event because she believes a woman’s right to control her own body is core to our freedom. She, along with Cheryl Maplethorpe and Barb Peterson, organized the River Falls rally.

“Mandatory pregnancy has no place in our society,” Page said. “It is a violation of our right to privacy and self-determination. I trust women to make their own healthcare decisions.”

She shared her own personal story in which she made the decision to terminate a pregnancy due to serious concerns about her health.

“I cannot imagine a world in which anyone other than my husband, my doctors, and my God would be part of that decision,” Page said. “It is a private and intensely personal decision and it should remain that way.”

Page opened her remarks by asking attendees to imagine a world in which children have parents who are well-educated and trained to be able to engage in meaningful employment to support their family. A world in which society supported families by assisting with day care, preschool and education beyond high school, in which reproductive health services and access to education and aordable hous ing help people enter adulthood successfully.

“Abortion is but one piece of a comprehensive reproductive health program,” Page said.

•About three quarters of Americans feel abortion should be legal in all or some circumstances.

• When Roe v Wade passed in 1973, it was viewed as a bipartisan issue. Republicans and Democrats supported a woman’s right to choose. Betty Ford, wife of Republican President Gerald Ford, was a vocal advocate for the legalization of abortion, stating, “It is time we get abortions out of the back woods and into the hospitals where they belong.”

• Half as many people are getting abortions today as were 30 years ago. This is due to education, access to reproductive health services, and likely a shift is societal views.

• Patients who seek abortion but are denied access are more likely to fall into poverty than those who can access abortion. Who gets abortions? Page asked the crowd. There is no one demographic that describes who gets an abortion, but the most common pro.le of a woman who gets an abortion is someone who is already a mother, she said. Fifty-nine percent of women who get an abortion are already mothers, Page said. They are often in their late 20s, have attended some college and about half are below the federal poverty limit. Most are performed in the .rst six weeks of pregnancy  98% of abortions are performed before 21 weeks.

The reality, Page said, is that women will continue to get abortions. Making them illegal will only eliminate safe abortions.

“Women with means will travel within the US or go out of the country to get abortions if they need to. Abortion will become a destination procedure,” Page said. “Women without means will either engage in illegal abortions or resort to self-induced abortions.”

The result is more women will die, Page emphasized.

“Being pro-choice does not mean we are anti-life. We are pro-life. We are pro-family. We are pro-children,” Page said. “We can respect the dignity of human life and support a woman’s right to terminate a pregnancy if she feels it is the right thing to do for herself and her family.

“Abortion is a decision that should rest with a woman, her life partner, her doctors and her God. The government has no place in this decision.”

Page said she and pro-choice supporters respect the perspectives of those who believe that life begins at conception. The question really is when do the rights of the unborn child equal or supersede the right of a woman to bodily autonomy, she asked.

"Abortions have always existed, and they will continue to exist," Page said. "The ques tion is, how hard we will make it for women? How dangerous will it be for women? How many women will die? Opposing abortion is not pro-life.”

By 1965, largely due to criminalization, abortion became increasingly unsafe — an estimated 17% of all deaths related to preg nancy and childbirth were the result of illegal abortions, Page said. By the late 1960s, a na- tionwide eort was underway to reform state abortion laws.

“In the 1973 case of Roe v. Wade, the Supreme Court issued a 7–2 decision protecting the right to choose whether or not to have an abortion on the basis of the right to privacy,” Page said. “Roe v. Wade marked an important turning point in reproductive health policy: The Supreme Court found that a patient’s right to make their own decisions about their pregnancy deserves protection.

“However, the Court also ruled that individual states could prohibit abortion in the second trimester through ‘reasonable health regulations’ in the name of patient safety — a paternalistic invasion — and entirely in the third trimester, as long as exceptions were made to protect the ‘life and health of the mother.’” The Planned Parenthood v. Casey 1992 decision abandoned the trimester framework in favor of regulation surrounding fetal viability — allowing for the creation of barriers to health care access through regulation. Viability was determined to be around 23 weeks, Page said.

“Abortions peaked in the 1980’s,” Page said. “Since then, abortion rates have declined – likely due to better access to birth control, and better education.” 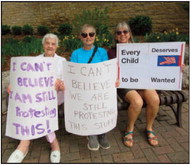 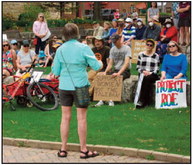 Western Wisconsin Health CEO Emeritus Alison Page speaks to the crowd assembled in Veterans Park on Saturday, May 14 for a BansO Our Bodies rally. Photo courtesy of Cheryl Maplethorpe 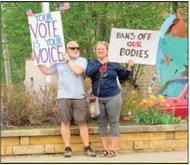