River Falls senior forward Lexi Szymanski takes a shot on goal during the Wildcats’ 31 victory on the road against Hudson. In the game, Szymanski had two crucial assists on Kraly Walker’s goals that broke the game open in favor of River Falls. Photo by Reagan Hoverman
News, Sports
River Falls soccer closing in on first conference title in nearly a decade

The River Falls High School girls’ soccer team has extended its streak of unbeaten games to 14, which includes a 3 1 victory on the road against Hudson on Tuesday, May 10, and is now on the verge of its first conference championship since 2013.

It’s been more than a full calendar month since the River Falls girls’ soccer team last lost a game. The aforementioned unbeaten streak dates back to Saturday, April 2, the last time that the Wildcats lost a game outright. In that time, River Falls has risen to the top of the conference standings with less than a week remaining in the regular season.

River Falls is currently 13 2 2 overall and is tied atop the Big Rivers Conference stand ings with Eau Claire Memo rial. Both the Wildcats and Old Abes share a conference record of 6 0 2 this season. River Falls head coach Charles Con

ley spoke about the conference stand ings with limited time remaining in the regular season.

“We’ve got a few more games to play, but I think this group is capable of winning conference and I think they’re capable of getting back to state, we should be in the sectional final game,” Conley said. “This team works hard for each other and we’ve emphasized that in our training.”

Whatever Conley and his coaching staff are doing in training, it’s cer tainly been effective and has led to wins and a dominant Wildcat team on the pitch. River Falls’ excellence, par ticularly on the offensive attack, was on full display in the 3 1 victory over the rival Hudson Raiders.

The Wildcats took a 1 0 lead into the halftime intermission on the road. In the second half, the team expanded its lead, in large part due to great pass

ing and goal scoring by some of the best forwards in the Big Rivers Con ference.

The Raiders scored the first goal of the second half to tie the game 1 1 in the 50th minute of action. Then, ap proximately nine minutes later, senior forward Lindsey Szymanski made a brilliant cross pitch pass to sopho more forward Kraly Walker, who found an open crease and scored to make it 2 1 in favor of River Falls.

In the 67th minute, it was once again Szymanski on the attack. Once the defense put pressure on Szyman ski, she made an excellent pass to Walker who was crashing the net, found some daylight, and scored an

other goal to give River Falls the 3 1 advantage, a lead that the Wildcats held until the end of the game. Conley spoke about the excellence of Szy manski and Walker during the rivalry game against Hudson.

“We got back to the way that we play in the second half,” Conley said. “We try to get those two into open space and find the other on the back post. That’s what we talked about at halftime and they certainly got back to it.”

Hudson – like in so many other high school sports – has been a pow erhouse in girls’ soccer throughout the last four years. Conley stated that be cause of that, there were likely some nerves among the Wildcat girls going into the game. He said there was one moment where it felt like his team fi nally settled into the game.

“It might sound kind of crazy, but them scoring might have got us to set tle in a little bit,” Conley said after the game. “They’ve been much better than we have the last four years, so even though we have the better record and I think we’re the better team, there were some nerves in the first half. After they scored, we settled in and realized what we needed to do to beat them.”

With all of the success that the girls’ soccer team has enjoyed this season, Conley stated that the girls are starting to feel just how special this team might be and they can certainly feel that they’re getting close to a BRC championship.

“We can’t get too far ahead of our selves,” Conley said. “We haven’t won the conference since 2013. (The girls) are starting to smell it and we just have to understand that it’s a tight race and we’re going to have to see Memorial again. We need to try to get better at playing more consistently.”

The twins, Lindsey and Lexi Szy manski, are the seniors on the team that produce most of the Wildcats’ of fense. In addition to the twins, senior midfield captain Olivia Nelson is a critical part of the team. The rest of the roster is mostly freshman and sophomores, with a couple of juniors also seeing minutes.

The youth of the team has been a reason, according to Conley, for some inconsistent play this season. He stated that if they can play whole games as they did in the second half of the Hudson game, then his Wild cats are going to be in good shape for the upcoming postseason. 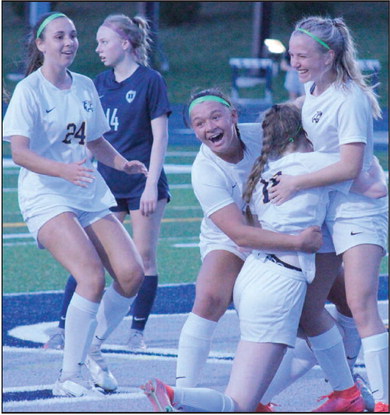 The River Falls girls’ soccer team was all smiles as they celebrated Kraly Walker’s first goal of the evening, which occurred in the 59th minute of action. Walker had two goals for the evening en route to a 31 victory over the rival Hudson Raiders. Photo by Reagan Hoverman