The River Falls High School softball team had one of its most dominant games of the season against Spring Valley on Saturday, May 14, at the Faye Perkins Softball Stadium in River Falls in a non _ conference matchup.

For River Falls, it provided some much _ needed confidence heading into the final week of the regular season and gave the team more reps at the plate and in the field as the Wildcats con _ tinue to gear up for the postseason in the coming weeks.

The Wildcats wasted no time jumping on Spring Valley’s pitching. After a scoreless top of the first inning, River Falls got its scoring going in the bottom of the first inning when junior Avery Amidon hit a two _ RBI single to shallow left field with the bases loaded. After a couple of Spring Valley errors, River Falls tacked on two more runs to take a 4 _ 0 lead going into the second inning.

While the game had essentially been decided in the opening two frames, River Falls’ white _ hot bats continued to pile on the runs. A 14 _ run bottom of the third inning gave River Falls a 24 _ 0 lead after three frames. Wildcats head coach Chantele Dulas spoke about the victory over Spring Valley.

One of the River Falls standouts was sophomore Jordan Schwantz, who has consistently been one of the most lethal Wildcats in the batter’s box this season. Coach Dulas spoke about her power at the plate and what she brings to the lineup.

“She hits the ball hard and brings a lot of intensity to the lineup,” Dulas said. “She is an intense kid who is always ready to go. She puts the ball in play and by hitting the ball hard she creates errors for the other team. She’s got a hot bat right now.”

While everything seemed to go the way of River Falls, al _ most equally appeared to go wrong for Spring Valley. After falling behind 24 _ 1 through four innings, the Spring Valley bats came to life and scored seven runs in the top of the fifth inning.

Despite the defense and pitching struggles against River Falls, the Cardinals of Spring Valley were able to generate of _ fense against good River Falls pitching. Spring Valley head coach Jane Borgerding spoke about what changed between those first four innings and the fifth inning when they began producing runs in a hurry.

“I challenged them,” Borgerding said. “I just told them that they could go one of two ways. Either they could stand there and their heads can go down, or they could go up to the plate and do something about it.”

Borgerding stated that when she challenged the girls and they began getting a couple of hits, the entire feeling of the game changed and suddenly there was confidence among the girls – regardless of what the scoreboard said at the time.

“They stepped up and they went and got those seven runs at the end,” Borgerding said. “It didn’t matter if (River Falls) put in different players in the field, it was still the same pitcher and they had to hit the ball off of her. They stepped up and they did that. I told them I was proud of them for that. We will carry that good momentum – that positiveness, we’re going to carry it into Monday.”

Throughout the season, Spring Valley has had several peaks and valleys in terms of play in the field and the batter’s box. Confidence is everything for the Cardinals. Borgerding spoke about how confidence impacts the product on the field.

“I think it’s a lack of confidence,” Borgerding said. “Some _

times they second _ guess themselves and get in a hurry. When one thing in the field goes wrong, then four or five go wrong. It’s not that they’re not trying, they’re working hard and they’re getting better. They stepped up there at the end.”

Spring Valley’s record doesn’t reflect the flashes that they’ve shown throughout the season. In the four games that the Cardi _ nals have won this season, they have scored nine or more runs and in three of those games, they scored 12 or more runs. The offensive firepower has displayed flashes, it just hasn't been consistent.

“We got up there and hit the ball hard, they have flashes,” Borgerding said. “Then we also have flashes of that ball landing between three people behind the pitcher’s mound. They keep working hard and they are trying.”

Spring Valley continued its season at home against Glen _ wood City on Monday, May 15, in the final two games of the regular season. That double _ header was slated to begin at 4:30 p.m. 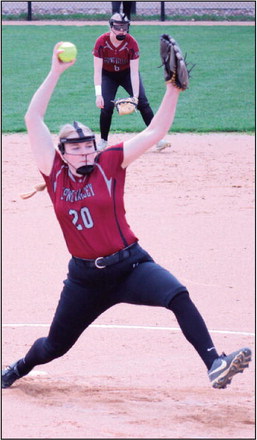