After jumping out to an 8

1 lead early in the game, the Spring Valley Cardinals survived a late

minated in a pop out and an 8

The Cardinals’ game against Ellsworth, played on Saturday, May 14, at First National Bank Stadium in River Falls, displayed what Spring Valley is capable of on any given day. The Cardinals hit the ball well, played good defense and used savvy baserunning to stave off Ellsworth’s late

Spring Valley wasted no time getting the offense going. The Cardinals strung together multiple quality at

0 lead for Spring Valley after the opening frame.

In the second inning, Spring Valley added another run when

junior Elijah Butts hit an RBI double to the left

field gap, which scored senior catcher Jackson Stein from first base. The Panthers also got on the board in the second inning.

Ellsworth senior outfielder Tanner Pechacek was hit by a pitch to start the bottom of the second. An errant pass on a pickoff at

tempt moved Pechacek to third base and into scoring position. That’s when senior Chase Snyder hit a double off the wall to make it a 4

1 game in favor of Spring Valley.

In the third inning, it was more Spring Valley dominance. The Cardinals scored two more runs to make it a 6

run rule might come into play in the coming innings. Ellsworth’s defensive mistakes cost the Panthers runs and the scoreboard reflected it in the sizable deficit. Ellsworth head coach Brandon Voelker spoke about those first three innings of action.

bats were good from the first inning. But defensively, three of our four errors were in those first three innings and they scored six runs. Credit to them, they hit the ball well today. We’ve gotta find ways to play defensively clean too.”

run top of the fourth inning made it an 8 1 lead heading into the bottom of the frame. That’s when Ellsworth’s rally began and the Panthers fought back into the game. With two runners on base, Ellsworth senior Urban Broad

RBI double down the left

field line. The next batter, junior shortstop Anthony Madsen, hit a two RBI single to right field. By the time the fourth inning was done, Ellsworth scored four runs and was right back in the game, trailing 8

In the bottom of the fifth, Ellsworth tacked on another run, making it an 8

7 game going into the sixth inning. The Panthers’ best chance came in the bottom of the sixth when they had run

ners on second and third with no outs. The next three batters were retired in order via groundout, groundout and a pop

Spring Valley added an insurance run in the top of the seventh inning with savvy baserunning that baited the Ellsworth infield into a throw to second base – trying to pick off a runner stealing second – while a base runner at third stole home. The senior

“Our guy should have gotten into a rundown (going to sec

ond),” Walczak said. “It wasn't done perfectly, but it was what

we were looking for. If they make that throw (to second base), we have the opportunity to take it and make it a two run game instead of a one

run game. It was doing the small things right that helped us out.”

While Spring Valley was locked in running the bases in the late innings, the Cardinals made some mistakes in the field that almost cost them the game. In the bottom of the seventh inning, junior infielder Tyler Boley hit a single and then stole second base. Spring Valley’s catcher threw the ball over second base and allowed Boley to advance safely to third base.

8 game, still in favor of Spring Valley. Two batters later, the game ended with an Ellsworth pop out. Spring Valley held on to secure the 9

8 victory and improve to 8

With errors on both sides and timely hitting by both squads, the game could have gone either way in the late innings. Coach Voelker spoke about the state of his team as they get prepared for what they hope is a lengthy postseason in the coming weeks.

“I’m happy with where things are at,” Voelker said of his Pan

ther team. “We lost our third baseman (Nolan Kummer) a couple of weeks ago, so we’re still trying to figure out a couple of things. We started the season 1

1 since then. We’re starting to put it together and find ways to win. They’re starting to realize that it’s the little things. We’re going to find a way to put runs on the board.”

Ellsworth had a fruitful penultimate week of the regular sea

son. The Panthers had two wins including games against Saint Croix Central and Somerset, before falling to Spring Valley on Saturday afternoon.

The Panthers are now 4

7 in Middle Border Conference games. Despite the record, the Panthers are playing their best ball of the season and with a collegiate level starter in Urban Broadway, anything is possible for this Ellsworth team.

As for Spring Valley, the Cardinals improved to 8

dinals, led by seniors Tyler Bowman and Connor Ducklow, have an experienced team capable of making a run in their respective brackets. Coach Walczak spoke about the season and the confer

“Ideally I’d like to have a few games back, the games with Elk Mound (conference leader) where we’re leading 5

0 going to the sixth inning and up 2

1 going into the bottom of the sev

enth,” Walczak said. “I’m happy overall, and because we’ve had some close games like (against Ellsworth) where we have to close them out. It prepares us for the postseason and I think we’re in a good spot for hopefully giving ourselves at least one home game in the playoffs.”

Both teams are gearing up for the first round of regionals, which is slated to begin on Thursday, May 26. Those full sched ules have not been released yet, as the last week of the regular season can still impact seeding for more than half of the teams in the tournament. 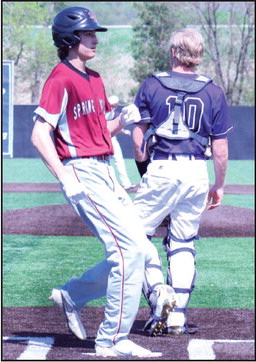