I know the fishing opener was a few weeks ago but just because I didn’t write about it at the time, doesn’t mean that I didn’t fish. Trust me, I did. I actually fished the Mississippi River which is kind of an un usual place to spend the opener because that water is open to fishing all year round. I guess for that reason it’s also a good place to go because most peo ple were heading north or to the trout streams. By this time, you know me well enough that as long as I have a fishing pole in my hand, I’m pretty content and the “where” is almost in consequential.

My brother Tuna was my guide and whenever he offers to take me fishing, I accept be

cause honestly, he has forgot ten more about walleyes than I will ever know. When he fishes a spot, he will verbalize theo ries on which way the fish will swim if the water goes up or down a foot. Me, I’ll sit in the same spot and wonder if my coffee is still hot.

We moved into a cut on the river that dumped into the backwaters and I looked around at the raging current wondering how far into the cut we were going to go. I couldn’t imagine a walleye would be anywhere in the vicinity with such fast water. At that point, Tuna pointed the boat back into the current and announced that I had the honor of the first cast. I did so but not before asking “where?”

Off the right side of the boat there was a log about 15 feet long that had some calm water around it. I was told the fish were on this tiny sandy bench on both ends of the log. All I had to do was throw my jig and twister tail out, land it in the right spot, and get ready to set the hook. I was a little skeptical but also knew that Tuna gives me the business about every thing, except walleyes. Walleyes are serious business in his eyes and I wasn’t going to second guess him.

I threw my lure out and let it sink and lifted slightly when it hit the sand bottom. A milli second later I felt the tug on my line so I immediately tugged back. There was no mistaking the head shaking walleye that fought with me from the other end of my line. I battled the fish half way back to the boat and was trying to keep steady pressure on it, but not too much. That’s when without warning, my line went slack and my fish was gone. Tuna had done his job and I had not. Even though I lost my fish, it was a great start to the outing. When I looked back at Tuna, he was fighting his own fish and he was smiling.

Didn’t get enough Dave this week? Visit “Outdoor Trails and Tales with Dave Beck” on Facebook for photos and video of Dave’s adventures. You can share your own photos and video with him there as well, or by emailing him at [email protected] news Also, check out OTT content on Instagram @thepiercecountyjournal 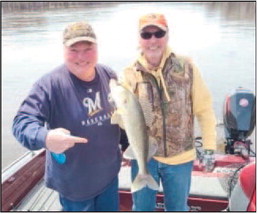