PRESCOTT – Kimberly Braun, the owner of Lucille’s in downtown Prescott, will host her second annual Drag Queen Brunch on Sunday, May 29. The idea of a Drag Brunch show took shape in 2020.

Braun was working at Lucille’s at the time of the protests.

from the restaurant what was going on,” she said.

She later found out on social media what the crowd was protesting and felt “it was really sad.” “Regardless of what you feel, there is a lot of people in town that were disappointed and were wondering who it was from town that was do- ing this because I don't think it accurately reflects the values wholly of this town of Prescott,” Braun said.

She found out it was an outside group from the Cities who was protesting.

“It was more of a radical church organization and they targeted that location because there’s four major gateways into western Wisconsin,” Braun said. “Places to cross the St. Croix and so you have Red Wing, Hudson, us, and Stillwater, so we just happened to be the lucky ones.” Braun learned this information from one of the persons commenting on the post, Zasha Catz. Catz grew up in Prescott and is a drag queen. Braun took the incentive and privately messaged Catz, “because she was talking about how she was so ashamed of the people of this town.” Braun said she reassured Catz and told her, “that although depending upon the percentages of who feels for gay marriage and relationships and against it, don’t pigeon-hole this whole entire town. There’s a huge number of people who are not like that.”

From the back-and-forth messages, Braun and Catz struck up a friendship and started following each other.

“I saw that she (Catz) was a drag queen,” Braud said. “Obviously it’s been popular in the Cities for a while: Seven, Union Depot, you can see where they do a lot of these drag queen shows. One night I was just looking for something out- side of the box to do, that's diuerent. And I'm like you know what, let’s try this. Why not?”

Braun reached back out to Catz, who was “so excited.” Braun's first drag brunch was, "one of the first shows that Catz produced herself.” Both Braun and Catz had no experience.

“A lot of these companies and these people that put these shows on are professional companies,” Braun said. “Treasure Island does it, you know, around the Cities, and they represent a troop of people.”

Catz found friends to participate, while Braun used her social media and graphics design experience to create the posters and Surly Furious partnered with her to promote it. Braun just wanted to see how it went.

“Let’s see if there’s people that want to do this because we felt like our patio (at Lucille’s) is the perfect location,” she said.

Although excited, Braun was “nervous” about the backlash.

“There was one person that was just like ‘not for me, no thanks’ who commented when I was trying to promote it,” she said. “But, I thought there would be more and there wasn’t.”

In fact, Braun said, “My regular guests and clientele were like, ‘Omg, this sounds like just a blast; let’s do it.’” This being Braun’s second year hosting the Drag Show Brunch, she thought, to kick ou the patio season and do something fun, let’s open it up and do it on Memorial Day weekend.

In addition, Braun said the highly positive response and people asking her to host it again, she thought it was a great idea to bring it back this year.

“We have 34 seats left out of 120,” she said. But as the show approaches, Braun knows the tickets will sell out again like last time. She hopes to host another show during Labor Day weekend.

Despite all the anticipation, Braun emphasizes, “It’s a lot of work since it’s all of my own equipment and I am the one to set it all up.”

Braun tries to make Lucille’s a place that appeals to a wide group of people. Besides the Drag Brunches, she also likes anything uncommon.

“Everything I do at the restaurant I try to do it as the unexpected, whether it’s the Thai food or the music I choose or the art for the walls, I want to make sure that it’s something that you didn't expect to find," she said. Braun wants Lucille's to fit that, "art style, more laid-back vibe.”

“I like the fact that it’s a local twist on this,” she said. “It started as a way to promote inclusivity instead of the negative thing that started the whole thing.” 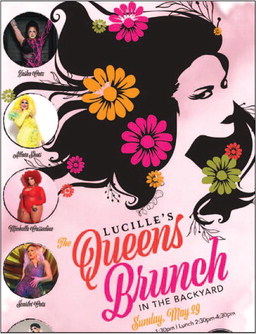 Kimberly Braun, the owner of Lucille’s in Prescott, designedthis flyer for her upcoming Drag Queen Brunch on Sunday,May 29. Graphic courtesy of Kimberly Braun