The annual Big Rivers Conference meet, held this year in Menomonie on Monday, May 16, was a situation for the Wildcats where everything would have to go correctly to win a conference title.

minated in a third and fourth place finish for the boys’ and girls’ track and field teams at the Big Rivers Conference meet.

Throughout the year there have been two teams on the boys’ side that have produced excellence consistently in New Rich mond and Menomonie – the two teams that beat River Falls at the BRC meet with team scores of 145 and 132.5 respectively. The Wildcats finished with a total team score of 95.

River Falls head coach Max Haskins knew that it was going to be tough to battle with New Richmond and Menomonie at the BRC meet. He spoke about the results and what he made of the third

place finish for his boys.

“I thought the BRC meet shook out in a way that was pretty predictable,” Haskins said. “I knew that we had an uphill battle to overtake NR and Menomonie and that proved to be true. They both have incredibly talented kids and run tremendous pro

While Haskins spoke highly of the impressive results from NR and Menomonie, he also spoke about his athletes, their re

sults, and how hard they worked throughout a highly

“We got some fantastic performances from our kids,” Haskins said. “Conference is a tough meet because we ask so much from our athletes. A lot of kids did a lot of events and gave it their all for their team. I’m very proud of our team and how they battled until the very end even when victory was out of reach.”

While many student athletes produced results around their season averages, River Falls junior Jacob Gilbertson had one of the best days of his track and field career. He finished third in the

meter dash and second in the 200 meter dash, scoring 14 of River Falls’ points early in the meet.

“(Jacob Gilbertson) had a heck of a day,” Haskins said. “He

set personal records in both open events, dropping his 100

River Falls senior Isaac Carns also had a great showing at the conference meet. He finished second in the 300

meter hurdles and was on the first

place 4×200 meter relay and the third

distance and relay events have been the strength of River Falls all season, and that certainly remained true at the Big Rivers Conference meet in Menomonie last Monday afternoon. Haskins spoke about the relays and their construction.

“We had a few new faces on our 4×100 and (sophomore Jacob Lane), and (sophomore Trey Hartung) so it was tremendous to see those guys step in and perform while the lights were brightest. They had been waiting for their shot all year and their hard work paid off.”

The relays in track and field are some of the most competitive events at any given meet throughout the entire season. For River Falls, the 4×400 meter dash has been a work in progress all sea

son. At the BRC meet, they finished third among some of the toughest relay groups in western Wisconsin.

“Our 4×400 relay team has been trending in the right direction all year and had another strong showing,” Haskins said. “Being in the top three of those relays is no easy task, so I’m incredibly proud of our kids and the hard work they’ve put in to be in a po

sition to do that.”

As for the girls’ side of the Big Rivers Conference meet, River Falls posted a fourth

dleman, who posted a second place finish in the 100

meter dash and a third

meter hurdles, winning by half of a second against sec

place Ellen Somerville of Hudson. Similar to what the boys’ team did, the girls’ team had strong showings in nearly every relay event.

The group of seniors Elise Frisbie and Allie Humburg and jun

ish in the 4×200 meter relay. The girls also had success in the

meter relay. The relay group of Frisbie, Humburg, and sen

place finish in the 4×400 meter relay. Senior Zoe Wise just missed out on all

conference honors with a fourth

place finish in the girls’ triple jump event. Haskins spoke about how the conference shook out for both the boys’ and girls’ teams.

“We had a lot of kids place very highly, but I don’t think we had anyone come out of the woodwork for a super surprising fin

ish,” Haskins said. “We needed a few dominoes to fall our way to get a team title and that didn’t quite happen.”

Up next, the Wildcats compete in the WIAA Division 1 Re 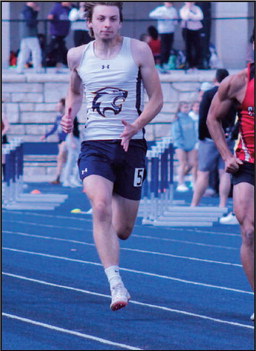