On Tuesday, May 17, the Spring Valley and Elmwood/Plum City track and field teams competed in the annual Dunn _ St. Croix Conference meet, which was hosted by Glenwood City this year.

The Spring Valley boys’ track and field team had the best showing out of the local teams at the Dunn _ St. Croix Conference meet. The boys’ fourth

Spring Valley also had strong showings in the relay events. The Cardinals posted a third

_ place finish in the 4×800 _ meter relay and secured a win in the 4×200 _ meter relay. That 4×200 group included seniors Ryan Burr and Colin Anderson, as well as Rielly and freshman Tanner Dicus. The Cardinals also posted a second _

The Cardinals’ excellence in the relays and certain individual events put Spring Valley on the board early in the conference standings. Freshman Cade Stasiek continued adding to that point total with a third

_ place finish in the triple jump.

When all was said and done, Spring Valley had totaled 91 team points, trailing only Glenwood City, Mondovi and Elk Mound. While the girls’ roster didn't fare as well in terms of total team score, there were still several individual highlights from the con

ference meet for the Lady Cardinals.

_ meter hurdles to get the Cardinals on the board. The Spring Valley girls’ 4×200 _ meter relay, which consisted of seniors Allison Graham and Kaitlin Graham and freshman Au

_ place finish which scored points for the team.

The Cardinals also scored points in the long

_ distance events, including senior Claire Anderson, who earned a fifth

_ place finish at the Dunn _ St. Croix Conference meet on Tuesday, May 17, in Glenwood City.

_ place finish for the girls’ roster included edging out Boyceville and Spring Valley, teams that finished in seventh and eighth

_ place respectively. The girls’ best performance was in the

1:52.32. That relay was more than two seconds better than the second

_ meter relay and took home second place and trailed only Mondovi in the standings for that event.

Hannah Forster also had a strong showing in the 300

The boys also had a similar showing to the girls’ program. The boys’ sixth

_ place finish beat out the two bottom teams in Colfax and Boyceville. The Elmwood/Plum City boys opened up the scoring with a second _ place finish in the 4×200 _ meter relay. That group of juniors Tyler LaCroix and Trevor Asher, senior Luke Webb and Riley Bechel trailed only Spring Valley’s roster during the event.

Elmwood/Plum City also had a strong performance in the

_ meter relay. That Wolves’ relay group missed out on first place by less than a quarter of a second to the Mounders of Elk Mound. The aforementioned Luke Webb and junior Beau Holt earned second and third

Senior Ethan Rupakus was dominant in the high jump, win

ning by more than six inches over the second _ place finisher from Elk Mound. Trevor Asher also took second in the boys’ long jump and third in the triple jump.

Although neither squad from Spring Valley or Elmwood/Plum City won the conference title, both teams showed flashes of great performances at the Dunn _ St. Croix Conference meet. Both teams will compete in the Regional track meet at Durand on Monday, May 23. That meet is slated to begin at 4 p.m. 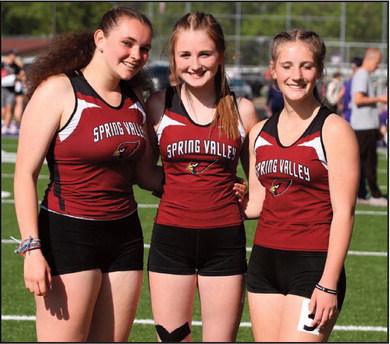