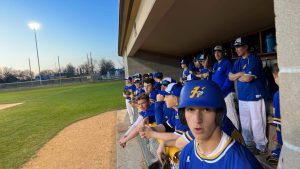 The Raider baseball team during the crazy South St. Paul game where they won 20-10. Photo by Bruce Karnick 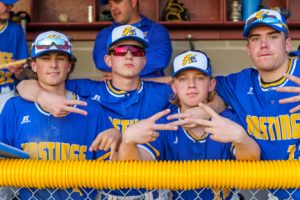 Joe Schuster, Jack Seleski, Evan Nelson and Axel Arnold goof around between innings showing the bond this team has with each other regardless of age and playing time. Photo by Bruce Karnick

***BREAKING ***
Thursday, 9:06 p.m.
The Hastings Raiders had an exceptional season this year on the diamond winning 17 of 20 games and winning all three games in the section defeating Cottage Grove 7-1, Apple Valley 7-3 and Burnsville 13-4. The 19 point run differential in the three games of the section and the fact that Hastings outscored their opponents 172-92 on their way to 17 wins did little to earn some respect with the section seeding committee.

This is an all too common theme for Raider sports. It happened to hockey and girls basketball this season and the slighting of Raider Sports in the section seems to be the norm. Hastings is in a section usually with teams from the South Suburban Conference. Those teams stick together making Hastings the odd team out, so it’s time for Hastings to prove them wrong.

When will the section game take place? As noted earlier, Memorial Day, but the time is not exactly known.

As of right now, the plan is to play at Veterans Park after the Hastings Hawks vs Rochester Royals game that starts at 2:00 p.m. with the expectation of the Raider game to start at 6:30 p.m. under the lights. This will be confirmed sometime Friday.

Why Veterans Park? It is a better setup for playoff baseball. There is a lot more room for fans, the atmosphere is awesome, there is nothing better than playing under the lights and the lights allow a later start time which allows a lot more fans to be there for both teams. Add in that Vets has a great concessions stand with affordable and delicious food and snacks, plus full bathrooms for fans and better parking, it’s going to be the place to be come Monday.

Keep an eye on the Hastings Journal Facebook Page and this story for confirmation of the game time and location.