The Ellsworth High School Class of 2022 throws their caps in the air after their commencement ceremony on Friday, May 27. Photo by Sarah Nigbor
News
EHS graduates Class of 2022

ELLSWORTH  "I know time has flown by and many of you are wondering, where did your kindergartner go?" said Superinten – dent Barry Cain at the Ellsworth High School Class of 2022 commencement ceremony on Friday, May 27. Many eyes were teary throughout the night as the EHS seniors celebrated their successes, future and relationships. Cain also introduced Principal Mark Stoesz, who is retiring June 30 after a three-decade career with Ellsworth schools. "My goal has always been to serve you to the best of my ability," Stoesz told the stu – dents. He advised students not to give up easily as life leads them to their next steps. Many doors will close, but the right one will open. He applied for 64 teaching positions before being hired by the one district that bothered to interview him: Ellsworth. "Life is funny that way," Stoesz said. "All these doors were closing but then a door opened. The bottom line in life is we have to persevere. Doors are going to close." Retirement is remarkably similar to grad – uation, Stoesz mused. As he presided over his 36

th and final high school graduation cer – emony, he encouraged parents to have faith in their children as they take flight into the world. "Have faith in them to button that top but – ton on their own. Remain encouraging and sigh with pride," he said. "I've seen our fu – ture and I love what I see." Ellsworth Community School District Foundation President Suki Mitchell present – ed the annual Teacher of the Year award to Ellsworth Middle School special education teacher Diana Lange.

"This teacher is the perfect example of why we have this award," Mitchell said. "She quietly goes above and beyond. She is a mentor, friend, role model, and confidante. She's always patient and never gives up. Her support reaches far beyond the school walls." Mitchell spoke about Lange cooking for her students and making sure they always have enough to eat, especially when they're not getting enough food at home. As Lange accepted the award, she said earlier in the week she'd been asked to come to the principal's ovce by EMS Principal Tim Conway. "It's amazing how many reasons you can think of in a few minutes," she said about be – ing called to the ovce. Soon the mic was passed onto the student

speakers, who spoke about the perseverance and fearlessness of the Class of 2022. Salu- tatorian Ann Lundstrom was first, using an analogy called "Mount Stupid" on which as freshman they were firmly situated. "It's impossible to plan for every aspect of our lives," said Lundstrom. "Who knows where we'll be in five, 10, 50 years. There's an expectation when we graduate that we should know exactly where we want life to take us. We will be taken back to Mt. Stupid of we limit ourselves to one path." She encouraged fellow students to make an euort to seek out unexpected opportuni ties.

"We have the freedom to choose," Lund – strom said. "Don't limit yourself to one path." Early graduate and published author Makayla Runyon based her speech ou the poem "The Dash," by Linda Ellis. I read of a man who stood to speak At the funeral of a friend He referred to the dates on the tombstone From the beginning…to the end He noted that first came the date of birth And spoke the following date with tears, But he said what mattered most of all Was the dash between those years "Do not be afraid of the world because we the Class of 2022 have so much to ouer," Runyon said. "Remember the moments be – cause we don't how how long our dash is." Hard times will always come to an end and having a positive perspective will make the world less scary, she advised. Speaker Kyle Luchsinger encouraged his classmates to live their lives as they fit. They have been taught to persevere and strive for what is theirs, he said. The Class of 2022 grew up during a time of massive change, but a time that showed them that every single person matters.

"The first step we took as a child was a monumental moment in our lives," he said. "We moved on step-by-step  This is one small step compared to the rest of our lives, but it represents the last 18 years." Valedictorian Brianna Maurer was the last student to address the audience. She quoted poet Ralph Waldo Emerson, who said "What lies behind us and what lies before us are tiny matters compared to what lies within us." She said coming into the Class of 2022 from St. Francis Elementary was a "rude awakening." They received lectures on be – having in middle school at least once a day and three out of five seventh grade teachers left. But despite their troubled past, or maybe because of it, they will succeed. "This is the class that will never give up and will persevere," Maurer said. 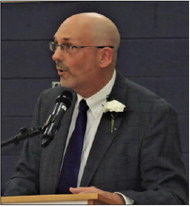 Colton Halverson (left) and Gabe Hallock march into the EHS gym during the commencement ceremony processional on Friday, May 27. Photo by Sarah Nigbor 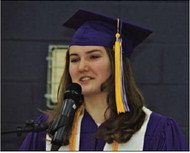 EHS Salutatorian Ann Lundstrom addresses her classmates during her commencement speech on Friday, May 27. Photo by Sarah Nigbor 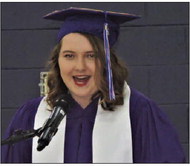 EHS senior Makayla Runyon, who pub-lished her first novel while a student, spoketo her classmates about not being afraid to take on the world at the May 27 commencement ceremony. Photo by Sarah Nigbor 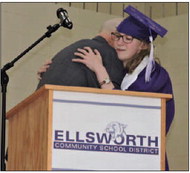 Abigail Karger gives Principal Mark Stoesz a big hug as she walks across the stage to receive her diploma on Friday, May 27. Photo by Sarah Nigbor 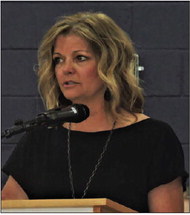 Megan Hansen (left) and Merideth Hansen walked together during the EHS commencement ceremony processional on Friday, May 27.Photo by Sarah Nigbor 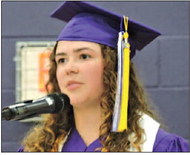 EHS Valedictorian Brianna Maurer admitted to being nervous about her commencement speech on Friday, May 27. Photo by Sarah Nigbor 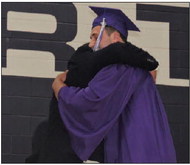 Kyle Kressin gets a hug, as well as his diploma, from dad and school board member Gary Kressin Friday, May 27 in the Ellsworth High School gymnasium. Photo by Sarah Nigbor 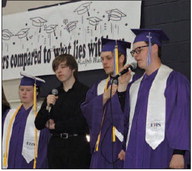 Senior Aaron Windsor sings a solo during the EHS Vocal Jazz performance during the Class of 2022 commencement ceremony on Friday, May 27. Photo by Sarah Nigbor