River Falls senior Brianna Strehlau leaps over one of the hurdles in the 100 meter hurdle event at regionals in Hudson. Strehlau’s success at regionals and sectionals qualified her for the state track meet in La Crosse. Photo by Reagan Hoverman
News
Ellsworth, River Falls track and field send athletes to state in nine events

Ellsworth and River Falls both had success at their re

spective track and field sec tional meets, as they send a combined 15 student athletes to compete in nine different events to the state track meet in La Crosse, which is set to begin the morning of Friday, June 3, and conclude on the evening of Saturday, June 4.

In total, River Falls sends 10 student athletes to the state track meet next weekend. One of the two River Falls head coaches, Max Haskins, spoke about the success at the Divi sion 1 Marshfield Sectional track meet.

“Overall, I thought we had a great day,” Haskins said of his athletes. “We were able to push a few relays through and had a lot of athletes that were in the mix to qualify. A ton of personal records were set and it was a great atmosphere for our athletes to compete. Our section is always very compet itive and that was the case again this year.”

The most dominant per

formances of the meet came from Carns in the 300 meter hurdles, who won the sectional championship with a time of 40.46 seconds, edging out sec

ond place Chippewa Falls by less than half a second.

River Falls’ other sectional champion included the 4×200 meter relay of Frisbie, Prigge, Silloway and Randleman. They won their championship group by more than a full sec

While there were several qualifiers and many events, there were also a couple of stu

dent athletes who barely missed the cut to go to the state track and field meet. River Falls junior Ella Peters missed out on going to state in the 100 meter dash by less than a tenth of a second. The boys’ 4×100 meter relay also earned a fourth place finish and nar rowly missed going to state. Haskins spoke about those close calls.

“As far as people that missed, we had a host of fourth place finishes but they were all expected to be close finishes that could have gone either way,” Haskins said. “It’s always tough to see an athlete have their season end with a fourth place finish at section als, but I think all of our kids recognize that they gave their very best and have no regrets.”

Ellsworth sends five athletes in four events The Ellsworth Panthers track and field team, which has become notorious throughout the state for its 4×100 and 4×200 meter boys’ relays, had five athletes qualify in four dif ferent events for the state meet in La Crosse on the weekend of June 3.

The relays have received much deserved attention, as they won a state championship last season in the relays and are looking to repeat this season with the new addition of Janke – his first year with the track and field program. Ellsworth coach Drew Pechacek spoke about the relays.

While there is a lot of con fidence in and around the Ellsworth track and field pro gram in the relays, there are other very good relay teams around the state that will be looking to dethrone the Pan

dom and are up to the chal lenge,” Pechacek said. “It will be their first true test of the season and they are excited about the opportunity.”

While the relay groups were elite last year and brought home hardware, the newcomer, Janke, has stepped right into his new role on one of the most talented relay groups in the state. His success has been piv

“Jack has been great all sea son. I would compare him to Shane Lange last year who went out for the first time and had great success,” Pechacek said. “I think that it takes a kid who goes out for the first time as a senior time to figure out what events they are strong in and how to be successful in those races. We knew he could be a great addition to our team.”

Janke also qualified for the 100 meter dash, one of two Ellsworth athletes to qualify for an individual event. The other was the aforementioned Pazdernik, who has made his name in mid and long dis tance events. Pechacek spoke about Pazdernik qualifying in the 800 meter run.

“Alex (Pazdernik) worked extremely hard in the offseason to get to this point,” Pechacek said. “He studied the heat sheets and saw who won each event and then sold out in the event he knew he had the best chance in. I think having him run the 4×400 relay the past couple of meets made him re

alize he can start his kick ear lier and compete with the top runners.”

While the highlights of those individuals going to state are great, Pechacek said that he saw a wealth of young talent on his roster when they com peted in sectionals and that he believes his program has a bright future.

“We had a great showing in sectionals with a young core group of athletes that represent Ellsworth very well,” Pechacek said. “If you looked at a lot of our competitors, they were freshman and sopho mores which bodes well for the future of our program.”

The most notable achieve ment was Elmwood/Plum City senior Ethan Rupakus’ first place finish in the boys’ high jump with a height of 6’4” which made him the Division 3 Sectional Champion.

E/PC junior Hannah Forster qualified for the state meet in the 300 meter hurdles event with a time of 47.7 seconds. Her posted time earned her a second place finish and a trip to the final track meet of the year. Rupakus, Asher and Forster will compete in the Di vision 3 State Track and Field meet along with their fellow Pierce County competitors this weekend.

cessful showings in their re spective sectional track meets and are looking to bring home some hardware from the state meet in La Crosse on Friday, June 3, and Saturday, June 4. 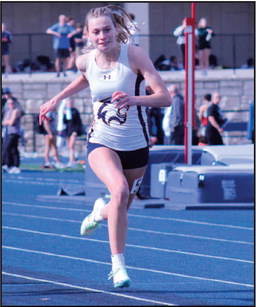 River Falls junior Rebecca Randleman competes in the 100meter dash at the regional track meet in Hudson. After having success at regionals and sectionals, Randleman qualified for the state track meet in La Crosse. Photo by Reagan Hoverman 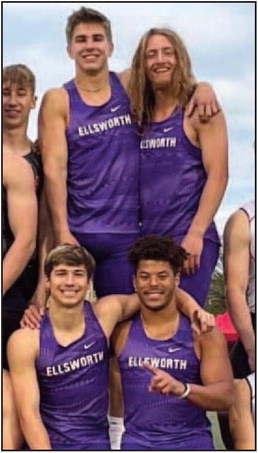 The Ellsworth Panthers boys’ 4×100 and 4×200 meter relay group of seniors Jack Janke, Ashten Quade, Max Grand and junior Bo Hines share the space on the podium after taking first place in the relays at the sectional track meet. Photo courtesy of the Ellsworth Panthers track team

Ellsworth junior Alex Pazdernik takes his place on the podium after earning a thirdplace finish in the boys’ 800meter run at the sectional track meet. He will compete in the state track meet in La Crosse this weekend. Photo courtesy of the Ellsworth Panthers track team