vision 2 Regional championship with a 10 4 win on the road against Somerset on Thursday, May 26, its first such title since the 2019 season.

Ellsworth has cruised through a Division 2 playoff bracket that was supposed to be anything but easy. Because of their 8 10 record in the regular season, the Panthers received the fifth seed in their portion of the playoff bracket and had to play two road games to win the regional championship.

The unorthodox route to a regional title – being a low seed and playing on the road – included a 6 0 win against #4 Saint Croix Central and a 10 6 win against the #1 seed Somerset Spar tans. Ellsworth head coach Kenzie Diercks said she’s spent the entire season preparing her team for this postseason.

“It feels pretty surreal (to win a regional championship), as we used most of the regular season to find the right lineup and to build the team chemistry we have today,” Diercks said. “From the very start, we said we weren’t focused on taking the confer ence title. Rather, we wanted to focus on building the best lineup and team dynamic to bring to the playoffs and the girls have done just that.”

Ellsworth’s impressive postseason run began in the regional semifinal on the road against the aforementioned Saint Croix Central Panthers. Ellsworth jumped out to an early 2 0 lead in the top of the first inning thanks to the offensive brilliance of the top of the order.

Sophomore Aubrey Wittenberg and senior Brianna Maurer got the action going with two singles to start the game. Later in the inning, Wittenberg scored on a passed ball and Maurer scored when freshman Aliza Acker hit a single down the left field line, giving Ellsworth a 2 0 advantage.

While Acker had success at the plate, she had even more suc cess during her pitching performance in that regional semifinal. In her seven inning complete game performance, Acker allowed only two hits and struck out six batters in the process.

Coach Diercks spoke about challenging Acker to step up dur

ing practice the previous night and how that potentially lit a com petitive fire in the freshman pitcher.

“She went all seven (innings) and stepped up when we needed her,” Diercks said. “At the end of last night’s practice, she wasn’t going to start today. We had to switch things up and she owned it. I told her, ‘I need you to get angry. I need you to get mad. Whatever you’ve got to muster up, I need you to use that and she did exactly that.”

Whatever Acker was able to muster up was more than enough for the Panthers. Her brilliance in the circle boosted Ellsworth’s confidence, which helped the bats stay hot going into the fourth inning. In the top of that frame, Ellsworth tacked on four more runs, breaking the game open with a 6 0 lead.

The offensive excellence was again in large part due to the success at the top of the order. Wittenberg, the leadoff batter, got the offense going with a double off the center field fence. After a walk for Maurer, senior Sydney Bartels blasted an RBI double down the left field line.

Ellsworth held its 6 0 lead until the Panthers made the final out. The first two batters in the lineup, Wittenberg and Maurer, combined to go 5 7 at the plate and consistently put the Panthers in a position to score early runs. Diercks spoke about their excel lence at the top of the lineup.

“They’re both consistent and they’re some of the easiest going kids ever, it just makes the team more riled up for them,” Diercks said. “They’re not typical cocky #1 players, they just hit the ball and be quiet about it. They show it with their talent.”

Their talent, along with the stellar play of Acker in the circle advanced Ellsworth to the regional championship against the top seeded Somerset Spartans on Thursday, May 26, on the road. After the win against SCC, Diercks stated that putting the ball in play and being defensively sound was going to be critical to pulling off the upset.

The Panthers certainly put the ball in play against the Spartans. Going into the bottom of the fourth, Ellsworth had amassed an 8 0 lead thanks to timely hitting, pushing for extra bases and tak ing advantage of Somerset’s mistakes.

The Spartans wouldn’t go quietly, as they hung four runs on Ellsworth pitching in the bottom of the fourth inning, giving themselves a chance in the late innings of the game. The Panthers remained poised, scored two more runs in the top of the seventh inning, and secured a 10 4 win.

After the game, Diercks spoke about the goals that she had going into the regional championship – putting the ball in play and playing stout defense – and how her team did in those aspects of the contest.

“Absolutely (we accomplished those goals),” Diercks said. “We hit the ball hard and took advantage of miscues for extra bases every chance we got. We didn’t pitch to our potential but our defense was ready to back up the mound.”

Playing on the road throughout a postseason can be mentally and emotionally taxing for any team. That’s why Diercks and the Panthers’ roster have focused on keeping up energy in the dugout.

“Arguably it was our dugout that fired us up to take the game,” Diercks said. “Our goal going into the game was to capitalize on our energy in the dugout. We believe that regardless of our out come on the field or up to bat, we can take back the momentum in the dugout and we did that every inning.”

Ellsworth will play in the sectional semifinal on Tuesday, May 31, on the road against the Railroaders of Altoona, the #3 seed in the bracket. Altoona is a Middle Border Conference team, so the two programs played twice during the regular season.

ond game of the season series 5 2. Each program won its respec tive home game this season. Coach Diercks spoke about the keys

to the game against Altoona and what it’s going to take to advance to the sectional final.

“We plan to do exactly what we have been doing the past two playoff games – capitalize on the controllables and pick up for what we may lack in the dugout,” Diercks said. “If we do that, we take care of busi ness. As far as pitching goes, we have three pitchers active in our lineup and we will look for whoever we feel best on the day of (the game).”

The Tuesday evening sec tional semifinal game against Altoona is slated to begin at 5 p.m. at Altoona High School. 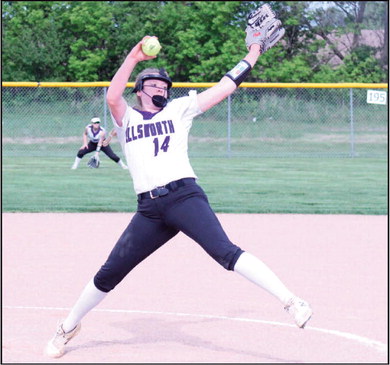