After defeating Mondovi 10 1 in the Division 3 Regional Championship game at home, the Prescott Cardinals punched their ticket to the sectional semifinal against the Blackhawks of Baldwin Woodville, a team Prescott has been waiting to see in the postseason since the first pitch of the year.

Throughout the year Prescott has slowly checked all of the boxes of goals that they set out to reach before the season began. Compete for and win a conference championship. Done. Get to the regional championship game and win. Done. Now, the Car –

dinals get a chance to face and beat Baldwin Woodville in the postseason – an opportunity they’ve been waiting for.

ner up, we knew that we could potentially meet in the sec tional. We talked about it on the first day of practice that our goal is to get a crack at them.”

To reach the sectional semi final game against Baldwin Woodville, Prescott first defeated Stratford in the re gional semifinal, which it did in a 9 2 victory, and then top

pled fourth seeded Mondovi to claim the Division 3 Regional Championship, on Thursday, May 26.

In that regional final game against the Buffaloes of Mon dovi, Prescott was in a jam early in the action. With one out and runners on first and third in the top of the first in ning, Mondovi was in prime scoring position with a chance to break the contest open early.

That’s when Mondovi sen ior Izzy Johnson stepped up to the plate and hit a screaming grounder to second base. Prescott junior Izzy Matzek fielded it and made a glove flip to senior shortstop Ari Tem mers, who tapped second base and threw a laser to first base for the double play to end the inning.

The double play not only erased a prime scoring oppor tunity, but it also ignited Prescott’s crowd and gave the girls confidence going into the bottom of the first inning. Coach Johnson spoke about how impressive the double play was.

“That double play in the first inning was a tone setter,” Johnson said. “If that ball gets up the middle, we go down 1 0 and that changes everything. That’s one of the best double plays I’ve ever seen.”

With the momentum from an excellent double play, the Cardinals got their bats going early. In the top of the first in ning, with two runners on base and no outs, senior Liz Rohl hit a single to right field which gave Prescott an early 1 0 lead.

nally over, the Cardinals had claimed a 5 0 lead and batted around the order.

“That was incredible (bat

ting around the order),” John son said. “It just takes the pressure off the girls if you get that early lead. We had oppor tunities to add on more runs, we didn't, but I thought we took good at bats and we made (their pitcher) work. We did what we started the season talking about – winning a re

gional championship and mov ing on.”

The aforementioned senior shortstop Temmers has been one of Prescott’s most consis tent bats all season – not to mention her outstanding de fense that anchors an already strong infield. In the regional final, she went 3 4 at the plate, scored three runs, and was in volved in that critical double play to end the top of the first inning.

“She had a beautiful drag bunt tonight, then hits a line drive to left and then gets an other base hit, she’s such a great player,” Johnson said of Temmers. “She’s had one heck of a career and she set the tone for us at the plate.”

Raebel also had a fantastic showing in the regional cham pionship game, tallying four total RBIs with a double on 2 4 hitting at the plate. Accord ing to Johnson, she has some of the best plate discipline on the team and is an elite hitter.

“She is a really good hitter,” Johnson said. “She doesn’t get cheated at the plate and she is going to give it everything she has. She’s got amazing bat speed and is capable of hitting balls off the wall and in the gaps. She had two big hits that scored four runs. On any given day she can come up big.”

“We’ve got to put the ball in play, you can’t strike out dou ble digit times against (Bald win Woodville),” Johnson said. “We have to make their defense work. She’s capable of (double digit strikeouts) be cause she’s a strikeout pitcher.”

Because both Baldwin Woodville and Prescott are in the Middle Border Conference, they’ve seen each other many times before. In their two meetings this season, they split the season series with each team winning its respective home game. They also shared the 2022 Middle Border Con ference championship as both teams posted an 11 3 record in league play.

However, in those two meetings this season, Prescott never faced Baldwin Woodville’s true ace, senior pitcher Morgan Smetana, who is one of the best in Wisconsin. Johnson said that his girls are familiar with her because they’ve faced her so many times throughout the years.

The sectional semifinal will be played at the Jackie Riley Softball Complex in Prescott on Tuesday, May 31. Game time is set for 5 p.m. between the two powerhouse programs.

“Here we go. We couldn’t have scripted it any better,” Johnson said. “If you want to get to where you want to, you’ve got to beat the best, and Baldwin Woodville, their pro gram is one of the best in the state.” 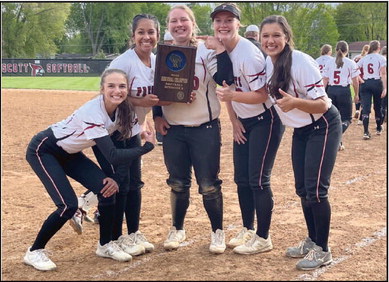 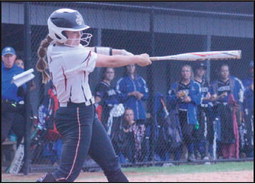 Prescott junior Addie Raebel was instrumental in Prescott’s 101 victory over the Mondovi Buffaloes on Thursday, May 26. In the regional final, Raebel went 24 at the plate with a double and a team high four RBIs. Photo by Reagan Hoverman