Prescott senior Maddie Matzek carries the baton in the 4x800meter relay at the Division 2 Sectional meet at Rice Lake on Thursday, May 26. The girls’ 4x800meter run time of 10:05.30 earned a fourth place finish and secured a spot in the state track meet in La Crosse. Photo courtesy of Faun Carel Stanton
News, Sports
Prescott track and field wins Regional Championship, qualifies for state in five events

The Prescott High School track and field had its best performance day of the season on Monday, May 23, at Baldwin Woodville High School, which resulted in a WIAA Division 2 Regional Champi onship for both the boys’ and girls’ rosters.

Prescott’s success at the regional track meet came in large part because the relays continued to be dominant, the team had great depth in a variety of events, and be

cause a lot of the Cardinals athletes set personal bests at the meet. In total, the girls’ roster took first place with 129 team points and the boys’ roster earned a first

“While we weren’t focused on finish

ing first as a team it was really cool to see that outcome,” Prescott coach Carl Cal

abrese said. “We had a lot of personal bests at regionals and some nice surprises, such as freshman Will Packard winning the 300

meter hurdles. Overall, we had a lot of events with multiple athletes scor

ing, which is a good representation of the depth of our team.”

While winning a regional champi

onship is a great accomplishment, Cal

abrese and his wife, Emily, who coach the team together, focused on getting as many athletes through to sectionals and state as possible – winning the regional title was a nice bonus.

Calabrese stated that the coaching staff has established a hierarchy designed to get as many athletes to sectionals and state as possible. In total, Prescott sent student ath

letes to sectionals in 23 events.

ther relays which made both teams markedly better in the long run. All four of Prescott’s relays – 4×100 boys and girls,

4×200, 4×400 and 4×800 meter relay groups – all advanced to sectionals. Their excellence helped put the Cardinals in a position to win a regional title for both the boys’ and girls’ programs.

more having a lifetime

best performance in the 100

meter hurdles which earned her a second

place finish and a trip to section

The regional track meet at Baldwin Woodville was a perfect storm of strong performances, consistent excellence from time

tested veterans on the roster, and a relay group on both sides that stacks up against any on this side of the state.

Prescott competed in the Division 2 Sectional track meet at Rice Lake High School on Thursday, May 26. The Cardi

nals advanced eight student athletes in five different events to the state meet which is in La Crosse on Friday, June 3, and Saturday, June 4.

The athletes who qualified for the state track meet include the girls’ 4×800 meter relay group of sophomores Sophie Ripley and Ava Budworth, junior Ella Johnson and senior Maddie Matzek, and the 4×100

The group of Peterson, Stanton, Lee and Russell also qualified in the 4×200

meter relay and Russell qualified as an in

dividual by winning the high jump and long jump events. Similar to many other schools, Prescott had multiple close

calls in events that could have gone either way.

“Just missing out were the boys’ 4×800, as well as our girls’ 4×400, all of whom placed fifth in their events,” Calabrese said. “The time that our boys ran would have won the sectional last year, which just goes to show how strong of a sectional we’re in this sea son. All of those teams were seeded on the bubble with a chance to advance.”

While Prescott has had more than its fair share of suc cessful track and field athletes this season, perhaps none has stood out more than the afore

mentioned Russell, who quali fied for state in four events. Because of his success in so many events, his experience was hectic at sectionals, to say the least.

“Aiden Russell’s path to state took place over a very ex citing and stressful hour and a half,” Calabrese said. “It started with him making his first two heights at high jump and then checking out to run the 4×200. Immediately after completing the 4×200, he had to return to high jump to at tempt six feet which earned him a top four finish and a trip to state.”

Russell’s chaotic sectional continued when he again checked out to compete in the 4×100 meter relay. After the conclusion of that, Russell had approximately seven minutes to get in his attempt at the high jump and 15 minutes left to get in his preliminary attempts in the long jump.

When asked what he wanted to do first, Russell stated, “I want to win the high jump.” Russell took one at tempt to clear the height of 6’2” which secured his victory in the event. He rushed over to the long jump with only six minutes remaining and com pleted all three of his prelimi nary jumps.

“Aiden (Russell) didn’t have a chance to do any run throughs before the competi tion started due to competing in other events,” Calabrese said. “So, we hopped on the runway, not sure if his ap proach would be on or not. It took until his third attempt to get a mark that would advance to finals.”

Going into his final jump, Russell was tied for sixth place – two places out of qualifying for state – with just one attempt left. In that final attempt, Rus sell scored 21’4”, which se cured his victory in the event. Coach Calabrese spoke about the week of state, practice and how his coaching staff is going to get the athletes prepared.

“The focus for our practices this week is about staying fast, strong, and most importantly, healthy,” Calabrese said. “We will continue to refine some jumping techniques with Aiden (Russell) and continue to per fect handoffs for our relays. The mental game is also im portant this week, so we will talk through a number of pos sible scenarios and prepare our kids to see high levels of com petition all around them.”

Prescott’s state qualifiers advance to the final meet of the season in La Crosse on Friday, June 3, and Saturday, June 4, and are scheduled to compete in events throughout both days of the event. 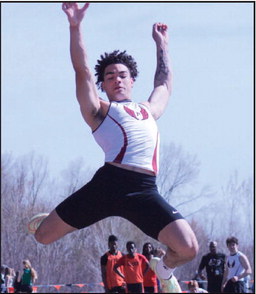 Prescott senior Aiden Russell competes in the long jump during a meet earlier this season. At the sectional track meet, Russell qualified for state in four events, one of which was his Sectional Champion long jump score of 21’4”. Photo by Reagan Hoverman