River Falls junior Matthew Marsollek rolls a putt on the 15th green at the Troy Burne Golf Club during his regional round. Marsollek finished with a round of 74, the best on the River Falls roster for the afternoon. Photo by Reagan Hoverman
News
River Falls boys’ golf finishes third at regionals, advances to sectionals

The Wildcats’ place in the sectional tournament was so lidified when River Falls sen ior Trey Timm made his final putt on the 18th green at Troy Burne, finalizing his 18hole score of 76. Other scores in clude junior Matthew Mar sollek’s 74, senior Ethan Campbell’s 83, and senior Jacob Landgraf and sopho more Will Benedict, who both shot 84.

River Falls head golf coach Tim LaVold spoke about re gionals, his team advancing to the sectional tournament and some frustration with how good golf is on this side of the state.

“We were just looking at other scores around the state and it’s frustrating because we’re such a good team. But Eau Claire Memorial is ridicu lously good and we’re always a shot behind Hudson,” LaVold said. “We’re still moving on. We have two guys that can shoot 75 or less and two guys that are close to 80 – we’re right there. It’s just such a good area for golf.”

LaVold’s frustration wasn’t with his players – it’s with the level of talent in the Big Rivers Conference and in turn, the re gional and sectional that they have to get through to make it to state as a team.

Eau Claire Memorial has, by all accounts, built the best Division 1 golf team in the state. The Old Abes are shoot ing scores that no other team can even come close to catch ing. Hudson and River Falls have spent all season battling for second place.

The margin between the Raiders of Hudson and the Wildcats of River Falls has been razorthin this season. That trend continued at the re gional golf tournament on Tuesday afternoon, as Hudson posted a secondplace score of 316 and River Falls earned a thirdplace finish with a team score of 317. Memorial took home the hardware with an im pressive 294 aggregate score.

While the onestroke loss to Hudson certainly stings, LaVold stated that playing in a highpressure golf tournament such as regionals will make his inexperienced varsity golfers – Benedict, Campbell and Land graf – even better for the sec tional tournament on May 31.

“They got another competi tive match that mattered under their belts and that’s going to make next week (sectionals) a little easier,” LaVold said. “They’ve felt what it’s like to have to play golf when it mat ters. That’s going to be big for our team.”

Marsollek, who has consis tently been atop the team’s scores this season, shot a 74 at Troy Burne for the regional championship. He spoke about losing to Hudson by one shot and that the players feel like they might have let one get away.

Marsollek was quick to look forward, since, after all, River Falls advances to sectionals and still has a chance to clinch a state tournament berth if the roster can string together some solid rounds in Wausau.

Because of the COVID19 pandemic that canceled the 2020 season, Marsollek lost his freshman season. Last year, his sophomore campaign, the team fell just short of reaching state and he wasn't one of the four individuals who qualified ei ther. This year, he’s gotten bet ter and he expects to reach state, one way or another.

“This year I expect to make it to state, it will be a letdown if I don’t,” Marsollek said. “Last year the cut (to make state) was 76. We’re thinking Memorial is definitely going to state and then there is Lakeland Union, which has one really good player. If we can beat them, I think we can do it. It’s possible, but we still have to beat Hudson too.”

One advantage for River Falls is that their two best play ers, Marsollek and Timm, have both played the Greenwood Hills Country Club in Wausau. It’s the same sectional site this year as it was last season.

“We played it last year in sectionals, so Matthew (Mar sollek), Trey (Timm) and Ethan (Campbell) have all played it,” LaVold said. “Trey (Timm) did well and he almost made it to state. He lost in a playoff. Both Marsollek and Campbell are both hitting the ball so much better right now than they did last year.”

Greenwood Hills Country Club is notorious for being a challenging golf course with tight, treelined fairways. LaVold spoke about how to play the golf course and what’s going to be important for his team to have success.

“It’s a very tight course,” LaVold said. “You just have to hit the ball in play and sacrifice some distance for accuracy. The greens are big and fast, so if you’re out of position you’ll threeputt a lot.”

River Falls won’t have an opportunity to get in a practice round, as the club doesn’t allow them on the weekend. The Wildcats are traveling down Monday afternoon and won’t have time to get a round in before the tournament be gins Tuesday morning.

Despite the sectional being extremely tough, River Falls has confidence that they can and will have success at sec tionals. According to LaVold and Marsollek, they have the players and the talent, they just need to go out there and shoot great scores to get to state.

The sectional tournament is slated to begin at 9 a.m. on Tuesday at the Greenwood Hills Country Club in Wausau. The top two team scores will advance to the state tourna ment which is slated for June 6 and 7 at Blackwolf Run in Kohler. 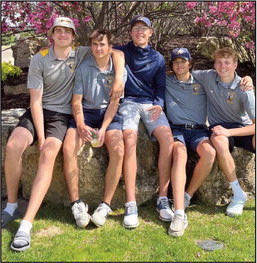 The River Falls High School boys’ golf team got together after they finished their rounds at the WIAA Division 1 Regional golf tournament at the Troy Burne Golf Club on Tuesday, May 24. The Wildcats’ aggregate score of 317 advanced the team to sectionals.Photo by Reagan Hoverman