Think the news is only bad these days?

Christopher Marion and Isaac Peeters of Troop 50 from Stanley will be working on some summer projects in north Stan- ley, the payou being better and improved amenities ou Fourth Avenue along with Eagle Scout rank for Marion and Peeters, pending project completion and review. Each has an Eagle Scout advisor to help them with the project details, while several workbooks are also involved. So what is each doing for the community as their Eagle Scout project?

“I’m going to be building a volleyball court,” Marion said of his Eagle Scout project with a hoped for completion this June. First , Marion plans to put down landscape fabric after first taking out six to nine inches of soil, then construct an adjustable net with four by four wooden posts measuring 12-feet long. Peeters will be working close by.

"I'm going to be fixing the Gazebo up and adding benches to it,” Peeters said of his project to be carried out just yards away. Peeters added that he wouldn’t be doing the roof but that an outside party was. Peeters will be supervising the overall Gazebo improvement project.

In order to be an Eagle Scout or poten- tial one, a Boy Scout must first earn 22 merit badges, then pick a beneficiary for their project.

“They both picked the church,” Troop 50 Scoutmaster Pam Henderson said of the projects. Pending the projects, some workbooks, and a review board, Marion and Peeters could be getting Eagle Scout rank soon.

As things stand it’s a one chance opportunity, as Eagle Scout rank must be achieved before a boy scout turns 18, which milestone both Marion and Peeters will arrive at this fall. 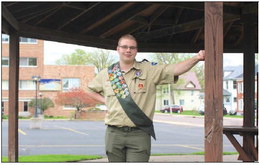 Isaac Peeters will be refurbishing the Gazebo on Fourth Avenue for his Eagle Scout project, with help on the roof. Photo by Joseph Back.