The spring seasons are winding down for everyone, including golf. On May 24, the girls team traveled to St. Paul’s Highland National Golf Course for the Metro East Conference Meet where they took second behind Simley. Simley has the two best female golfers in the state, Isabelle and Reese McCauley, and the team has strength behind them.

For Hastings, Lauren Hubbart had a great round, shooting 84. Maddy Daley fired off an 86, with Lauren Skov coming in at 89 and Megan Brown rounding out the team scoring with a 93. Ashlyn Endres also had a 93 and, Emma Langenfeld shot 100.

The accolades for the team do not stop there. Head Coach Becky Hartung is stepping down after 16 years of coaching the girls golf team and, she is stepping down from the top. Hartung was awarded the Metro East Conference Coach of the Year award.

“I am honored and humbled to have served as head girls golf coach for the past 16 years,” said Hartung. “I am blessed to have built positive relationships with female studentathletes throughout the years and their wonderful families. It was just the right time for me, ending on a positive note with these outstanding senior girls. It is time to pass the putter on.”

Best of luck in your future endeavors coach, you will be missed by many, including this rookie reporter!

The boys went to Emerald Greens on May 27 for the Metro East Conference Meet where they also took second behind Mahtomedi, tying with St. Thomas Academy. The Raiders and STA scored 313 to Mahtomedi’s 298. Individually, Charlie Williams finished with a 75, Martin Onnen shot a 77, Ryan Swanson an 80 and John Harris finished out the team scoring with an 81. Luke Kendall had an 82 and Jake Harris a 90.

“It seems like we could be peaking at the right time. Our kids have played very well the two weeks and look forward to hopefully opening some eyes next Friday at Bunker Hills for Day one of our section tournament as the five seed,” said boys head coach Matt Klein. 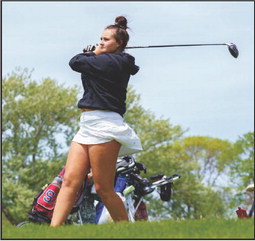 Maddy Daley was in position to finish in the lead for Hastings on the 17th hole where she made a great recovery. Her tee shot here was well placed but she double bogeyed the 18th hole to finish with an 86 for the round, two behind Lauren Hubbart. Photo by Bruce Karnick

Head Coach Becky Hartung is retiring from coaching after 16 years. She was awarded the Metro East Conference Coach of the Year. Hastings had four golfers earn allconference awards and one allconference honorable mention.Photo by Bruce Karnick