Noah Paulseth was the first to score a run for the Hawks after he was hit by this pitch in the arm. Yes, the bruise was big and purple on Monday, but worth it for the win in Miesville.Photo by Bruce Karnick
News
Hastings Hawks win big in Miesville, fall to Rochester

The rivalry between Hastings and Miesville has been an interesting one. It’s one that seems to go back and forth between the teams. The last several years, the Mudhens have been the dominant team winning most of the games against the Hawks.

Could it be the tides are turning? Last year, Hastings went to Miesville and beat them there, 82, but then lost in Hastings, 72. This year, the first meeting was Saturday at Miesville.

The contest started off with not much action until the second inning when Noah Paulseth was hit by pitch to get on first. He then stole second and was brought in to score when Isaac Flynn hit a solid single to right. That gave Hasting the 10 lead.

In the fifth inning, Jason Greeder and Cole Benson were both hit by pitches and they were brought in by Cory Wolters and Jake Sandquist singles.

In the seventh inning, things got interesting. Benson hit a single, Wolters walked and Sandquist hit an infield single. In the attempt to throw Sandquist out at first, the ball was thrown away, scoring Benson and moving Wolters to third with Sandquist right behind him at second. Connor Malcom was on the mound at this point for the Mudhens and right after the mayhem that moved the runners up a base, he balked, scoring Wolters and moving Sandquist to third. A couple of minutes of arguing by Mudhens manager Matt Van Der Bosch and others, and one player was ejected from the game. The Hawks led 50 after the seventh.

Into the ninth, the two Hawk pitchers, Tommy Ritt and Ben Bundschu, had a combined nohitter going and the Hastings offense was not done yet. Wolters hit a hard fly ball to center field just in the gap, and Wolters was into third. Sandquist hit a single adding an insurance run to bring the lead to 60.

The bottom of the ninth was exciting. The Mudhens finally broke up the nohitter when former Hawk Austin Ledoux logged his first hit of the season. A second Hen got a hit and suddenly there was a scoring threat to break up the shut out. The Hawks managed to get two outs and the runners were still on base when a fly ball was hit to right field. The ball was picked up and relayed to Flynn, who then gunned it home to catch Ledoux at the plate for the final out.

The Hawks hoped to carry that energy into the remaining two games of the weekend, Sunday at Hampton and Monday home against Rochester.

The Hampton game was postponed due to field conditions and the Memorial Day game was not good, but some good things happened at the game. The VFW color guard presented the flag for the National Anthem. That was followed up with Shane Hudella, President of United Heroes League throwing out the first pitch.

With the game being on Memorial Day, the Hawks had one other surprise in store for fans. A popular trend on Facebook, and one this reporter can fully support is called Taps Across America. The idea was simple. Anyone that can play Taps was asked to step out of their homes and play it on their front step or in their front yard at 3:00 p.m. CDT. The game was paused at 2:59.30, the teams stayed where they were on the field and a brief introduction was read before Brian Schommer played Taps as the flag was raised back to full staff. The silence on the field was incredible and the whole two minutes was extremely moving to witness.

Unfortunately for the Hawks, the game was not moving, as they fell 205 in seven innings, and that is all that will be reported on that one.

Hastings does have a game Wednesday night, 7:30 p.m. at home against Burnsville before the take the show on the road to a weekend long tournament. 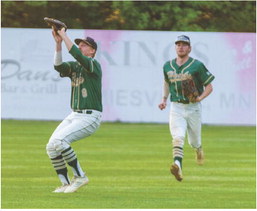 Nick Horsh makes a grab in right field surrounded by three other Hawks players. Defensively, the guys are playing very well this season and it’s been a huge part of their early success.Photo by Bruce Karnick