As Mayor Mary Fasbender said at the first Memorial Day celebration for Hastings, “Memorial Day, May 30 brings images of hamburgers, hot dogs, swimming pools, and summertime for many Americans. But the last Monday of May serves most importantly, as a time to honor those who died while fighting in US armed forces. It's a holiday steeped in somber American history and tradition. The day actually began as Decoration Day following the Civil War, when mourners placed flowers on the graves of Union and Confederate soldier’s graves. Yes, Memorial Day has also been a time to signify the unofficial start of summer. But let's remember the heroes who made it all possible. It's now a weekend to also remember those who lost their lives simply in living in our country.”

The weather cleared up and held strong for the remainder of the day, and the third scheduled event kicked off at 11 a.m. at the Rotary Pavilion at Levee Park. The event’s emcee, Mike Sawicki, started things off with introductions of all the guests for the event. Then he gave an informative and entertaining speech before he introduced Mayor Fasbender.

After Mayor Fasbender helped fill in the crowd on the additional Hastings council members in attendance, she started her speech with the words that started this article. She continued.

“Our community has a rich history of military service and sacrifice, as many have fought and died here and abroad, to defend our freedoms, and our way of life. We're here today to honor our service members and to remember the sacrifices they have made for our country. Thank you to all the service members and veterans who are here today. Thank you to all the fallen members who paid the ultimate sacrifice and could not be here today. Let those memories live on in our hearts. Today we join family members throughout the country who gather together to remember and honor and to give gratitude to those who served for our country. Our collective energy is a tribute to those last troops and to their families. It's a way we say remember.”

Pastor Paris Pasch gave the invocation, “Holy God, the lowered flag symbolizes how grateful we are for those who served our country with courage and honor. We asked you to help us care for our neighbors and give us the desire to serve those less fortunate. May we live in such a way that the lives of those who fought for our freedoms are not in vain. And forgive us, Lord, for failing to place you first in our nation. And please lead us back into fellowship with you. We asked you to meet with us this morning at this memorial site. Help our minds and hearts understand the great sacrifices made by those who put themselves in harm's way for we who enjoy such tremendous liberty.”

The presentation of the wreaths was followed by Gordon Gathright singing the National Anthem and the VFW Honor Guard and Rifle Squad firing a threeshot volley. The flag at the riverfront was raised and lowered during the playing of Echo Taps by Hastings Senior High School Band Members Alexa Lawrence and Ethan Berndt.

Next was guest speaker Tom Chorske. Chorske explained how he became involved with the Defending the Blue line, now the United Heroes League through the NHL and their work with UHL President Shane Hudella. That brought him to this story.

“When Shane asked me to come down and say a few words, on this Memorial Day, it really was a gift because it got me thinking a lot about Memorial Day. When I was probably about these youngsters’ age, my dad, we were at a hardware store, he took me and he said, ‘Come here’ and we walked over to a vet and he just thanked him for his service. Then he pulled me back aside and said, ‘Now whenever you see a veteran, someone that served, I hope you'll go up and shake their hand and thank them.’ I've been thinking about that a lot. When you think it at the time, when you're that young, you don't fully realize why he did that. I thought he was just being a nice guy thanking the military service person for their service, but you get older and you realize the sacrifice that the military folks make, by committing to entering into one of the five services. They sacrifice, being around the comforts that we enjoy. They sacrifice, some precious time and years with loved ones. And the service, you start to understand what service really means and that the military folks are serving our country. They're serving the rest of us back here that they don't even know, but they're serving our country. They're serving the freedom that we enjoy. The courage that it takes to think of going into battle, fighting in strange, foreign lands. It just brings me to a really deep sense of gratitude.”

Gathright sang America the Beautiful followed by the benediction from Pastor Pasch before the program ended.

At 1 p.m. there was a program held at the United Heroes League campus east of Hastings. Details of that are in a separate story on page 2.

The seventh annual March for Them began early in the morning in Red Wing. 26 marchers set out to walk from Red Wing to Hastings along the Wisconsin side of the Mississippi River, 28 miles. The March for Them places Honor Markers along the route of men and women from all branches of the military that gave the ultimate sacrifice. Marchers do not need to be a veteran to participate.

Tom Wright, executive director and his team of volunteers, put on a safe march for those who participated in the trek, and his team had a wonderful reception setup at the Rotary Pavilion to welcome the marchers back to Hastings. The 34th Infantry Red Devil Rock Band was highly entertaining to the crowd that waited for the marchers to return.

Once the marchers returned, Wright emceed the presentation introducing each march participant and allowing them the opportunity to speak about who they marched for. Hearing the stories of each person honored is quite moving. Those honored were from all branches and included those killed in the line of duty or those that took their own lives after returning home.

Wright addressed the question of should those that take their own life be honored and his response was greeted with loud cheers from the crowd. “Twentytwo soldiers take their own lives each day because of the things they experience in serving, should they be honored here? Hell yes they should.”

Participants in the seventh annual March for Them trekked along Hwy. 35 about 8 miles south of Prescott Monday afternoon. The12hour march started in Red Wing and ended 28 miles later with a ceremony in Hastings. Marchers encountered brief rain in the morning. Photo by John McLoone 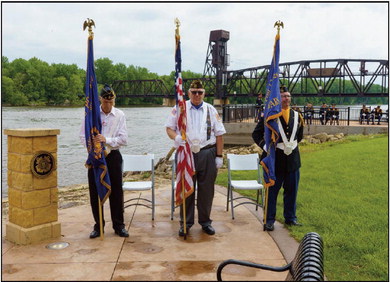 Behind the VFW Color Guard is the VFW Rifle Squad ready to perform a threevolley salute. The threevolley salute was used in older wars to indicate that the wounded and dead have been removed from the battlefield and that battle could resume. It is used now as a way to memorialize a fallen protector. Photo by Bruce Karnick 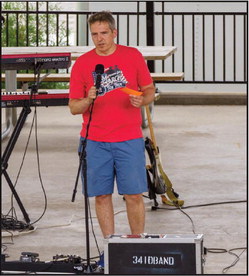 Tom Wright, the organizer of the March for them presented each of the marchers so that they could share a brief story about the soldier they marched for. Some soldiers died in the line of duty, others died as part of the 22 a day. 22 soldiers per day take their own lives due to PTSD caused by serving in the military. Photo by Bruce Karnick 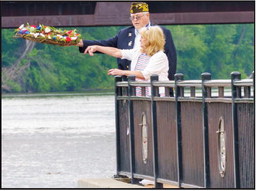 VFW Auxiliary President Barb Hamilton and VFW Commander Kevin Kuehn give the wreath to the Mississippi River to honor all those who gave their lives in defense of the freedoms for this great nation. Photo by Bruce Karnick