Anything for a Coho

Thirty three years ago this week I was living in the Canadian bush and was the camp manager at Chimo Lodge and Outposts which is a fly in fishing camp. It was my second season and I had made an agreement with Dick and Molly Emerson who owned The Poynette Press, to write a weekly column about my six months in the bush. When I came home in November this column which at the time was called North of the Border was very popular and this week, I am writing for 65-papers and I love my job.

Tuesday, May17th High 53, low 36 One reason that cold weather in mid-May is a good thing is that coho salmon which migrate north each spring continue to swim in shallow water. The water that I am talking about is Lake Michigan and this week’s outdoor adventure would take place at the port of Kenosha and I would be paddle trolling out of my canoe.

I have taken part in this type of experience about once a year for twenty years, some years I paddle in the middle of the summer and push myself all night as there is generally less wind and boat travc. The coho action is in late April to maybe June 1st.. I put in at the marina in Kenosha and when I paddled back after dark I would be sleeping in the backseat of the Chevy Hotel.

During this late afternoon until about an hour after dark I did not see one other watercraft on Lake Michigan and it was quite chilly. I use a Helix 7 for electronics a 2×6 C clamped to my gunnels with 3 Scotty, rod holders and I also have a Coleman propane lantern that is screwed to the 2×6.

Two of the rod holders would be loaded with trolling rods that were rigged with dodger/fly combinations that had a left and a right planer board to pull them way from my canoe. My other rig is a spinning rod with 12-pound test line and I was using a deep diving crankbait on it.

So here is the reality of paddling a canoe and fishing this style, it is hard to paddle fast enough to make your lures attract a fish and it is crazy hard to land a fish once you get a hookup, which in my case is rare.

So I reach 40-feet of water which is maybe 1.5 miles from shore, all is well in my world and one of my rods with a flasher fly starts bending and I can see a coho jumping like a bunny 35-feet behind the board. At this point nothing, not even death matters. First thing I have to do is quit going into the wind or else my other two lines are guaranteed to get real ugly with each other and with the rod with the coho on it. Next part of the game is to get the planer board ou from my line without losing my quarry. All of that worked out but then the coho that had no desire to become fillets swam in front of my canoe and my line got caught on a rivet. I did a catch or die move and got the line ou and the fish in the net. You got to do this in a canoe, to fully understand the mental reward when it all comes together.

I promised myself a beer if I caught a fish, but I was in no mood to burn daylight with anything else in my hand other than a paddle, rod or a fish. So, I mistakenly paddle back to 30-feet, burn an hour and start working my way east to deeper water. Literally the first time the Helix 7 showed 40-feet, my crankbait got whacked and it was fish on. The game is much easier in a canoe with a spinning rod and no planer board, I did not worry about the other lines and just like that I had coho number two flopping in the belly of my rig and this time I pulled a beer out and thor oughly enjoyed the moment.

I have come to realize that the way I paddle troll which is by squat- ting on my knees has a mental and physical max of five hours. At about 3.5 I start to lose most feeling, at 4 I couldn’t swim if I had to. At 5 hours it literally takes me a lengthy period of time to get out of the canoe when I reach shore and I pray there is no one watching.

After another wonderful night in the back seat of The Chevy Hotel I put 5.5 hours on Lake Michigan and had one chance. It was one of those jumping coho's and it was on a flasher fly. One of its jumps was a home run for the fish and it was a good thing for the coho because when I catch a salmon in a canoe the chance of it getting released is about as slim as gas going back to $2.00 bucks a gallon while Joe Biden is President.

That should get me some wonderful emails. Live large while you have the option! 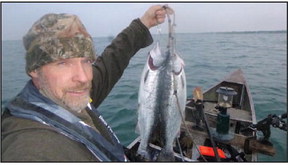 If you catch a salmon while fishing in a canoe you have had a goodday.