After Covid cancelled the 2020 season we were forced to switch gun clubs and split up our teams with trap shooting in Hampton and skeet in South St. Paul for the 2021 season. This resulted in us having to reduce the size of our teams significantly limiting trap to 80 and skeet to 15. We are happy to have both teams back at our 3M facility in Cottage Grove for 2022. During the seasons competition and practice rounds we were impressed by the trap teams 25 straight 25’s and one straight 50 as well as the skeet teams 10 straight 25’s. We have had a great season besides not catching a weather break and expect to see some amazing shooting at the state and national championships this summer.

Based on five competition weeks the trap team ended the season in fourth place for Class 9A Conference Two with 86,794.00 points against Foley, Lakeville South, Nicollett, Northfield, Norwood Young America, Owatonna, Prior Lake and Rosemount. Prior Lake took first place with 114,990.50 points, Foley second with 92,113.50 points and Owatonna third with 86,803.50 points. Senior Captain Brennen Kieffer ended the season as Conference second place male with a 24.40 average. He will receive his conference award at the state championship in Alexandria.

Brennen Kieffer also placed eighth for Top 100 Overall Statewide for trap. He will receive an AllState patch and is qualified to compete at the MN State High School League Trap Tournament Invite Only in Prior Lake on Friday, June 24th against the top 100 shooters in the State. It’s no wonder he shot five straight 25’s and the only 50 straight trap as well as one straight 25 skeet so far this season. Congratulations Brennen!

The skeet team ended their season in Third place for Class 2A Conference five with 3,072.00 points against Cherry, Irondale, New Prague, Prior Lake, Spring Lake Park, Thief River Falls and Wayzata. Prior Lake took first place with 3,516.50 points and Wayzata came in second with 3,235.50 points. Top 25 Season Overall statewide for skeet 11th place, Top 10 Overall male 10th place and Conference Top 10 male sixth place was earned by senior captain Brock Mosher with a 23.10 average. Even though there is not a high school league skeet championship Brock still gets to claim his fame as one of the best skeet shooters in the state. He will receive a special allstate patch from the league. So far this season Brock has shot four straight 25’s trap, and two straight 25’s skeet. Congratulations Brock!

On Tuesday June 21st 85 members (24 females/61 males) of the trap team will compete at the State Championship in Alexandria, the world’s largest trap shooting event. We have 17 members (1 female/16 male) of the skeet team registered to compete at the State Skeet Championship in Prior Lake on Thursday, June 23rd. The goal in Alexandria is to qualify a fiveperson squad for the MNSHL Trap Tournament in Prior Lake. National registration is open so we will soon know who will be traveling to Lansing, MI in July to compete against shooters from all over the nation. 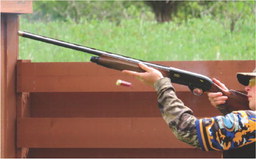