Luke Chorlton will need to keep adding to his team leading 37 goals this season if the Raiders hope to continue in the section tournament. At right, the Raiders have had a unique situation this year, two pairs of brothers playing on the same team, Luke and John Chorlton, and Ryan and Ben Clemens. Here Ben looks to move the ball down field to his brother Ryan. Photos by Sarah Wasvick
News
Raiders Win in Overtime against Cretin Derham Hall

By Dave Erickson The Hastings Raiders Lacrosse team won a close one against the Cretin-Derham Hall Raiders at McNamara Stadium, and, it took a little more than four quarters for the Hastings Raiders to finish off the CDH Raiders.

What it took was Tom Reifenberger winning an overtime face off to himself, pushing the ball up the fans sideline, and drawing a penalty against the CDH Raiders and putting Hastings on a power play. That set up Kody Niederkorn’s game-winning, walk off, 8-7 sudden victory goal. Reifenberger was a major factor in the victory, not only winning face offs but allowing his wings to have opportunities for the ones that he didn’t win clean. Face-offs were a big factor and so was Reifenberger. He made the difference, Hastings coaches said.

Hastings started the game with what looked like was going to be a runaway victory, opening a three-goal lead early. CDH and their coaching staff didn’t panic and fought their way back into the game and into the lead in the third quarter. Sophomore utility player Wyatt Vieth, who the Raiders have called on this year to play a number of different positions, fought through some nagging injuries, and took some big outside shots. Veith made one of the biggest goals of the year to tie the game and stop Cretin’s momentum. Both teams were playing well, and it seemed like it was a game of little runs, and who would be on a run when the fourth quarter ended. It was very much like the game Hastings just had against Saint Thomas Academy earlier in the week.

The Chorlton brothers – John and Luke – started the game like they were playing catch and shoot in their front yard, making one play that could have been an ESPN highlight for high school lacrosse: A half field pass from John on a rope to Luke who was on a dead sprint to the crease and then a dunk on the goalie. It’s clear they play together more than at practice. Luke led the Hastings Raiders with four goals and John led the team in assists.

Niederkorn had the game winner, Collin Duerkop added a goal and an assist, Vieth got his welltimed goal and Ryan Clemens used his speed to score on the tunnel end of the field rounding out the scoring. Joey Werner again had a real nice game. Werner has been called on this year to play close defense fulltime for the first time this season. A close defenseman that does not get noticed is a real good defenseman, and it’s important to give him credit for that kind of play. Owen Glade also played extremely well, keeping his man away from Jackson Sweeney and away from the crease.

Sweeney has put together a two of his best games of the year back-to-back, and he will need to keep improving into sections. Sweeney seems to be hitting his stride, peaking or just playing his best, whatever you want to say or how you want to say it, at the end of the season when you need it most.

The Raiders have looked to a lot of different players this year. Ben Clemons, Max Lidtke, Holden Richardson and Zander Hallis are all seniors who have contributed without a ton of recognition. But if Hastings wants to continue playing in the section tournament everyone will need to step up.

Hastings closed out the regular season with games against Woodbury and Rochester Mayo, both games on the road. Hastings fell to the Royals 14-6 but rebounded nicely and dominated Mayo 18-3.

The Raiders controlled the game from the beginning, but the Mayo Spartans did give the Raiders something to think about the first few minutes. The Spartans are a young team with big athletic attack men, and their offensive midfielders were good. Their defense will get better as they are also very young. The Spartans only had three seniors and their senior pole was hurt. That really allowed the Raiders and Luke Chorlton to exploit them on the offensive end. Chorlton finished the regular season breaking the single season points record again this year, this year doing it with Niederkorn, and Duerkop instead of Alex Thompson.

Niederkorn is one of the best players at finding the soft spot on the field and has great hands. He had a great year and finished the game with three goals. Duerkop had four goals and three assists on the night to finish his senior regular season. Lidtke and Clemens also finished their senior regular seasons with goals. Veith and Carter Simpson also scored in the game, while Sawyer Zaruba also got his first varsity goal with a helper from senior John Chorlton.

Luke Chorlton was the one that finished the strongest with six goals and five helpers in the game. Fans also got a little preview of what the team will look like with Niederkorn, Vieth and Luke Chorlton playing together for a while. Ryan Clemens, Reifenberger, Simpson, Hunter Rowan, Tom Kennedy and Zaruba got to play together, showing fans what the midfield should look like next year.

Hastings won a spot in the sections finals to play a home game at McNamara Stadium on Todd Field against Eagan, just as they did last year. Last year there was a conflict with setting up for graduation and the Raiders had to play their first home section game away at Hill Murray. The game against Eagan for the first round of the Class 3A Section tournament is on June 2 at 7 p.m. 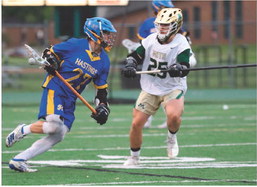