Baseball and golf are over for this year at Stanley-Boyd, after regional results not in the teams’ favor. Meeting Ladysmith at home Thursday May 26, the Orioles varsity baseball team came up short in a 10 -0 loss to the Rusk County capital, following a narrow 7 – 6 win by the Orioles over Owen-Withee on May 24 to make a 6 -14 record overall for the 2022 spring season. Coach Ryan Sturm shared some thoughts after the Ladysmith game. In golf, the result was the same, with Coach Devon Wenndt sharing some thoughts on the season. “We did not have anyone advance past the Regional this year,” he said. “Freshman Cole Brenner was clos- est, missing the playou for the final spot by 4 shots.” Wenndt said Brenner recorded a season best score of 93 at Black River Falls, missing the playou by just four shots. “There were certainly opportunities for the others, but sometimes golf happens,” he said.

In our case, it was the sixteenth hole that really hurt us, with a combined five balls out of bounds on that hole alone.”

Next expressing hope the team could learn from it to give themselves a better opportunity in 2023, Wenndt said he was proud of the golf players.

“I’m proud of my team for demonstrating consistent improvement this season, and look forward to what we will be able to do with a veteran team next year,” he said.

And then there was track— still on for the moment, as Zach Boes vaulted 12 feet and six inches for a person record, also qualifying for state. Boes will compete Friday June 3rd at La Crosse, with the meet beginning at 3 p.m. Those interested in attending must buy their tickets online at https://www. wiaawi.org, as cash will not be accepted at the door. The track meet is at the UW in La Crosse.

As to Sectionals at Rice Lake, several finishes are wor thy of mention.

Among them was senior Maralyn Boettcher placing second in the 200-meter dash, with a finish time of 27.66 sec onds.

“Maralyn ran her best 200 of the season tonight but it was not good enough to make the finals. She'll have a chance to bring her times down next year at Carthage College,” Seidl said, with the district recently holding several signing events for senior athletes.

For the boys Cooper Nichols took seventh at Sectionals, with a time of 23.51 seconds for personal record.

"Cooper ran a terrific race to make the finals, setting his PR but coming up short in the fi nal 200-meter dash. The competition is tough at this level. Cooper worked hard to make it back to state, but it was not to be. He is a dedicated athlete and we were privileged to have coached him.”

Finishing out the seniormentions for Track, Carsen Hause made 5’ 10” in the high jump, finishing just one place from qualifying for state.

“We knew that it would take a 6’0” jump to make it to state,” Seidl said. “Carson put himself in position to make it but could clear 6’0.” He had a good career as a jumper for our track team. I wish he had one more year.” 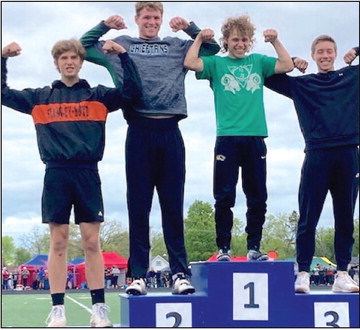