The Heroes Monument at the United Heroes League property at 15211 Ravenna Trail has been talked about for quite some time. Questions about where it is, how can people get their loved ones on it, when will it be open to the public are all answered now.

The Heroes Monument was officially opened to the public as of Memorial Day. The hours of operation will be Thursday through Sunday 10 a.m. to 4 p.m. For people looking to get their loved ones on the wall or looking to sponsor, visit www.unitedheroesleague. com/pledge/ For the grand opening ceremony, many of the UHL board were on hand along with Mayor Mary Fasbender, Dakota County Commissioner Mike Slavik, many community members, WWII Veteran Lou Chicquette, the Gold Star Anderson Family and guest speaker, retired NHL player Tom Chorske.

UHL President Shane Hudella emceed the event, and he brought up Retired Army Chaplain Ken Biel to give the opening prayer. After the prayer, Mayor Fasbender spoke.

“The City of Hastings and my family has a rich history of military service and sacrifice, as many fought and died here and abroad, to defend our freedoms and our way of life. As I stand here with pride for many local names on the stones behind me, it reminds me that we are here to honor those who served, and we can never replace the holes in our hearts left behind by a fallen service member,” she said. “I was raised to first honor this day with visiting grave sites and events honoring those people who served us. In today's world, I feel some of our history has been lost. My hope is that parents and families bring back that history into those youths’ lives and talk of history of our military heroes. Shane, we are so fortunate for your efforts to build a national organization that helps military families by getting sports equipment to the hands of youth today. Now you have built a memorial that connects multi generations of families who have served over the years. We are so fortunate to have this monument in our city. Let us continue to honor them and pay attention to those who have served our country. Our collective energy is a tribute to those troops and to their families. It's a way we remember.”

After Mayor Fasbender, Commissioner Slavik spoke. “I'm humbled and deeply honored to be here today and thank you Shane and United Heroes League for this opportunity. Just six and a half months ago, many of us were gathered here at this very same place to dedicate and cut the ribbon for the heroes Memorial behind us. It was an exciting celebration, but today is different. Today is more somber and reflective. Today is a day where we remember our heroes who paid with their blood and their life for the freedom we all enjoy today,” said Slavik. “For many families, Memorial Day weekend does kick off a wonderful season of barbecues, swimming, camping, and all sorts of outdoor fun. After six months of snow, cold and ice, we can relate to being able to find some time to celebrate outside. But today and this weekend are so much more than that. Frankly, it is time for a change in our society where we elevate Memorial Day to its former prominence. Memorial Day is a day unlike any other. Since 1868, we have come together in our communities, cities, towns, to place flowers and flags on the graves of those who have given their last full measure of devotion for our country. We have come here to remember and honor those who have done their duty and never asked for anything return, other than to be respected and remembered for their duty of protecting our freedom and our way of life. In doing so these soldiers paid the ultimate sacrifice their life for our freedoms. The meaning of Memorial is in memory. With this in mind, we know the true meaning of Memorial Day to honor and remember all those American soldiers who died defending our freedom, our right to be free. It's the soldier, not the reporter who has given us the freedom of the press. It's the soldier, not the poet who has given us the freedom of speech. It's the soldier, not the politician that ensures us our right of life, liberty, and the pursuit of happiness. It's the soldier who salutes the flag, who serves beneath the flag, and whose coffin is draped by the flag. Those Americans who died in all these wars did their duty for God and our country. And we know who they are as we visit cemeteries and note the dates of their shortened lives on their headstones. We know their loved ones, their spouses, and mothers and their children, and the friends who will always miss them.”

Tom Chorske was next to speak, recapping his day in Hastings, speaking at the Rotary Pavilion at the 11 a.m. ceremony and how he has been involved with the UHL mission since it was called Defending the Blue Line. He spoke on the community pieces and the camaraderie pieces that are similar for both the NHL and the Military and how well the United Heroes League has blended them together to support military families.

The final speaker was Shavon Anderson, whose husband Ben died in 2013. She spoke of the difficulties being the single mother of three boys active in sports was and that the United Heroes League provided multiple opportunities for her boys to participate in sports. UHL helped her and her kids feel that they were not alone.

Hudella closed out the day with the help of the VFW Rifle Squad and the Anderson boys. The boys helped raise the flag to full staff while the rifle squad did a threevolley salute. 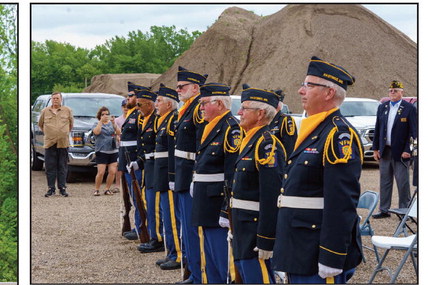 It was a busy lunch for the VFW’s Rifle Squad with the United Heroes League Heroes Monument being their second stop of the day to provide their support of the festivities for Memorial Day. Photo by Bruce Karnick 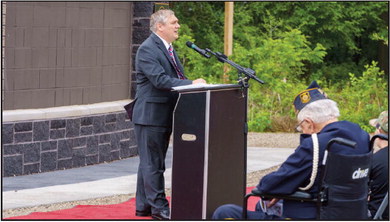 Dakota County Commissioner Mike Slavik shared his thoughts on the meaning of Memorial Day in front of the UHL Heroes Monument. Photo by Bruce Karnick 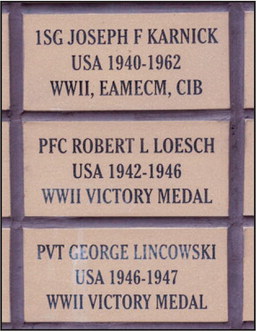 A sampling of the bricks placed on the UHL Heroes Monument. These bricks not only display the names of the service members for all to see, but they also provide families with the opportunity to learn more about their family history as I did here learning about my three grandfathers’ service in the Military.Photo by Bruce Karnick