Charlie Williams punched his ticket to state with another clean round at Bunker Hills. Williams shot a twoday total of 149 and a thirdplace section finish. Photo by Bruce Karnick
News
Trio of Raider golfers head to state meet

The Hastings Raiders boys golf team travelled to Coon Rapids for the Section 3AAA tournament at Bunker Hills golf course. Round one was Friday, June 3 with the boys starting at 9:00 a.m. and the girls starting just after noon. The same schedule was in place for round two on Monday, June 6. The top five teams proceed to round two with only the winning team advancing to state. The top five individuals not on the winning team also go to state as an individual.

Heading into sections, the boys had a practice round at Hastings Golf Club. During the practice round, they had three eagles on holes 10 and 11, which added to the energy of the team before the section tournament.

Junior Charlie Williams led the boy’s side of things in round one finishing with a three over 75. Williams birdied two holes but bogeyed five.

Junior Ryan Swanson had one birdie on the day coupled with a few bogeys and a few double bogeys to finish with a 10 over 82.

Freshman Jon Harris felt he could have had a better day on the course but still managed to finish with a 12 over 84.

Luke Kendal finished the team scoring with an 88 to give the Raiders a 329 which put them out of the running to go to day two as a team.

Junior Martin Onnen, who had been tearing up courses previously, finished with an 89 on the day, and Senior Jake Harris finished with a 94. Those two scores meant their season ended on Friday at sections.

“The section match was a grind,” said Head Coach Matt Klein. “The wind was up and the temps were down, but as a whole, I’m very proud of the boys for having a chance to qualify for day two. It really came down to our last few holes and we did not quite make the cut.”

“Charlie played very well shooting a 75, his driver was on autopilot and his feel on the greens was on point. Ryan Swanson found his groove, nicely shooting an 82 but played his last 13 holes shooting just four over to keep him in contention. Freshman Jon Harris made his section debut making the cut right on the number. I expect a great round on Monday for him,” explained Klein.

With the scored being cumulative between the two days, Hastings’ best chance for an individual to go to state was Williams. Williams shot a 74 on day two for a 149 total putting him in third for the section. Harris and Swanson qualified for the second round but had a huge mountain to climb to reach the top five. Harris cut five strokes off his day one round to score 79 on day two giving him a tworound total of 163, 13 strokes out of fifth. Swanson finished the day with an extra stroke from day one and total of 165, 15 strokes out of fifth place.

“Overall, I had a very solid couple of days,” Williams said after qualifying. “I made a couple of huge puts and the momentum kept me alive.”

Was he nervous to start the day? “I’m not going deny it, I was SUPER nervous this morning, but I tried my best to take after Thomas McGinnis, he likes to say ‘pressure makes diamonds,’” added Williams. “Going to state should be a super cool experience. I can’t thank everyone enough that has been cheering me and the rest of my team on. Go Raiders!”

On the girl’s side, things went a little different for the team. The Raider girls made the top five on Friday and played as a team on Monday in round two.

“It was a very emotional start to the day; the girls are all seniors, and it was their last day of school. So, they had to work through their emotions in the van on the way up to Bunker and get ready to play golf,” explained Head Coach Becky Hartung.

Another factor for the emotional side of things, not only are all the varsity players seniors, but Coach Hartung is also retiring after 16 years, so this is the last hurrah for all seven of them. The ride up had to be full of laughs, stories, tears and every one of the ladies had to be a ball of a variety of emotions.

Ashlyn Endres led the way for Hastings with an 87 on day one. Lauren Hubbart shot 90, Emma Langenfeld made a huge drop in her average score on the season to come in with a 91 and score for the team, and Meghan Brown rounded out the team score with a 93. That gave the girls a team total of 361. Lauren Skov shot 94 and Maddy Daley shot 100 on day one.

For day two, things got interesting. Endres continued to play well, holding steady in the top eight all day and finishing with a 175 for the two days.

Hubbart was a few strokes out halfway through the day, but she continued to fight hard. On day one, Hubbart struggled on 16 with a bogey, and then double bogeys on 17 and 18. On day two, she conquered those same three holes with a birdie on 16, par on 17 and bogey on 18, a sixpoint swing on the final three holes. She also birdied 12 on day two after a bogey on day one, a twopoint swing. With all that hard work on the final three holes, she dropped to a 175 twoday total, tying Endres and joining her on the trip to state.

Daley had a monster recovery on day two, clearly shaking off the jitters she experienced with her 100 on day one. Daley finished with an 84, the best single round score for all of the Hastings girls. That twoday score of 184 was good enough to move her up to 19th on the leaderboard.

State is scheduled for June 14 and 15 back at Bunker Hills, an advantage for the section 3AAA golfers because they have already played there twice where other sections played other courses. State will follow a similar time schedule. The boys will start the day off in the morning at 7:30 a.m. and the girls will start at noon. Individual rankings were not available at press time, so the exact tee time is not known as of yet. Keep and eye on the Hastings Journal Facebook page and we will get an update out once it is made available.

Best of Luck at State Raiders! 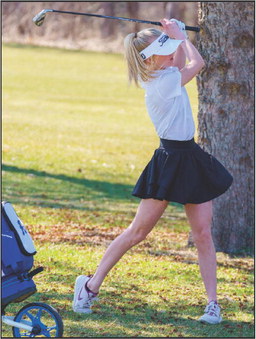 Ashlyn Endres kept her composure all day Monday to stay in contention for a state tournament bid. She locked that in with a twoday total of 175. Photo by Bruce Karnick 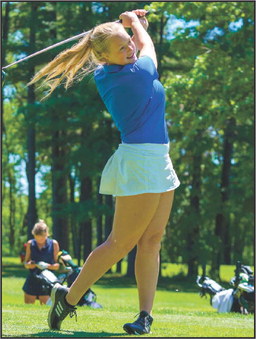 Lauren Hubbart shot a 90 on day one and 85 on day two for a combined 175. The five strokes she cut from day one qualified her for state as an individual. Photo by Bruce Karnick