The staff of Perkins of Hastings surround Regional Manager Jody Verhaest as she cuts the ceremonial grand opening ribbon for the reopening of Perkins in Hastings. Photo courtesy of Perkins
News
The triumphant return of Perkins!

It’s been a long 10plus months, not just for the folks trying to get the Hastings Perkins open, but for the residents of Hastings and the surrounding communities waiting to get their favorite meals. Tuesday, August 3, 2021, a fire started between midnight and 1:00 a.m. when the restaurant was closed. Because it was closed, no one was inside, and thankfully that means no one was injured. Unfortunately, that meant that no one was there to notice it quickly, and the fire made its way into the attic space.

The damage was so severe from both the fire, smoke and water, that a full rebuild was needed inside. Perkins estimated a January reopen time. That quickly changed a few times until it was a Memorial Day open time.

“We are so happy with the City of Hastings and so pleased with how they worked with us. If we could have gotten rid of the supply chain stuff and not have six months to get a fryer, it probably would have been sooner, but I am at the mercy of equipment people,” said Perkins Vice President Mary Larson.

Those supply chain issues really tested the patience of all involved and all those waiting for the store to open. That is what pushed the open to June 13, 314 days since Perkins was last open. Those delays also caused many of their loyal employees to find other employment.

“It’s close to 30 employees that have returned,” explained Larson. “It was the whole, how busy are we going to be? Are we really going to open? It’s been 10 months. So many people went on and started doing something else. There are people coming back part time that were full time before and many are just giving us notice now they are coming back full time or expanding their hours. It’s like they wanted to get here and make sure it’s real. That is what we find happening whenever we open restaurants, whether they are rebuilds or new, because people can’t give away money right? They need to make a paycheck, and we are glad to have those 2530 people coming back to Perkins.”

It was heartwarming to see the building so full of people and active. For every server, there was a trainer right along side of them. On the grandopening day, there were at least six servers on duty plus four hosts and a few busers. There were also regional and nationwide support personnel in the store.

The kitchen was just as packed with workers and trainers. It was controlled chaos, but folks did not mind, as “their” Perkins was back. As people were leaving, we asked patrons “how was it?” Every answer was positive. “Delicious! Yummy! Awesome! So glad to have Perkins back open! I feel like I waited a long time for this, and it did not disappoint.”

The new concept is much more open and sterile, a lot of whites with grey accents inside. There’s very little artwork on the walls and definitely a brighter atmosphere.

Some may be disappointed though, there was one major removal from the menu. Pot pies are gone. The ingredient manufacturer stopped making the chicken they used so it was time to retire it, but they added corned beef hash. Otherwise, the menu contents remain unchanged.

“I really just want the town of Hastings to know we appreciate your support and that we are so happy to be back. We hope that they come in and see us soon that they can get their buttermilk pancakes and Granny omelets and pork chop dinners or whatever else,” added Larson.

Just remember, a lot of these people working at Perkins are new. Yes, they have been trained, and yes, they have a lot of support for the next week or so but think about how long you took to become efficient at a new job. Remember, kindness, patience and grace go a long way when dealing with others, especially when there is a lot of stress going on in a new place and a new job. Plus, Hastings has been without Perkins for 314 days. Appreciate that it is back and enjoy your first meal in the new restaurant.

Perkins hours are 6 a.m. to 10 p.m. Sunday through Thursday, and 6 a.m. to midnight Friday and Saturday. 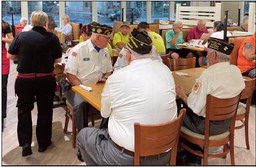 Customers were lined out the door before the 8 a.m. reopen of Perkins. Here are the first ever guests to see the new concept store for Perkins. Photo courtesy of Perkins.