Graduation for 2022 at Stanley-Boyd is on May 27 at 6 p.m. The ovcially call was made at the April school board meeting.

That being said, the Stanley- Boyd Board of Education has a new board president, and her name is Denise Houstatter.

Following a brief interim that saw retiring finance ovcer and board secretary Sue Kiraly open the meeting in place of president Geist, it was into nominations, with two names put forward for the next board president: Bob Geist and De- nise Houstatter.

“I nominate Bob Geist for board president,” Lance Carlson started, followed in turn by a suggestion from Toni Seidl.

"I nominate Denise Hou statter,” Seidl said. With no other names coming before the board for consideration it was into voting, with superinten- dent Jeu Koenig handing out paper ballots to board members for their input.

Collecting them a short while later, the outcome, was clear: Geist with three votes and Houstatter with four. With Houstatter euectively garner ing 57.14 percent of the split board vote it was on to other board ovcer positions, with Housttter leading the deliber ations out.

Following public comment and a board compliment for its concern for student safety, the meeting moved next into the Student Council report by English teacher Kayleigh Steinmetz and council public rela- tions ovcer Janelle Schesel.

“So we got over 30 students to help out,” Schesel said of the recent April 30 Spring Cleanup, with Council organizing other school organizations to help as well.

“We had a very good turnout and it was very successful. Lots of help and it was fun when we all worked together,” she said of the Spring Cleanup euort. After cleanup there was a kickball tournament, though some numbers were small “because the weather was chilly.”

Following the otherwise routine report by Student Council, it was into regular board business, with superin- tendent Jeu Koenig sharing that April 18 had been a Professional Development Day for stau, aimed in part at helping recognize cyber threats.

From there it was into review of SL 11 Instructional Materials Selection, with Lewallen and Seidl making mo- tion and second to find the dis trict in compliance, the matter then passing. And with that, it was into serious business: getting people to help with extracurricular activities.

“The biggest problem we have is getting coaches and advisors,” Koenig said of SL 14 on Extracurricular Activities, with currently reported opportunities including archery club and Oriolettes, among others. The archery club technically existed but hadn’t been able to do anything for lack of the requisite adult.

Other opportunities for potentially interested parities include student clubs, including

Denise Hostatter has been elected the new school board president following a vote at the April school board meeting. Photo by Joseph Back. SCHOOL NEWS

Spanish. Board member Chad Verbeten had his own take on the divculty of find ing club and activity leaders.

“But that’s not a Stanley-Boyd thing,” he said of the general deficit in such roles. The issue was general, with sports seeing more participation nationwide than other activities. Schools were advertising, but finding the right people was tough.

With motion then made by Verbeten and seconded by Lewallen, the board moved to find the district in compliance with SL 14 Extracurricular Activities. From there, it was into 4.0, Administrator and Board Communications.

Koenig reported on the recent Personnel Handbook Committee fallout, with matters pertaining mostly to cleaning up Handbook language. Use of diuerent terms for the same positions was standardized, so that switches between custodian/ maintenance/cleaner became “Custodial/ Maintenance,” while wage and salary changes saw the return of category L2 with an additional category called “M.” A typo correction near the end was made so that stage increased by $2,250 rather than L being just $2,220 above K, while each letter category was split into two parts, up to L2. Thus A1, A2, B1, B2, C1, C2, and so forth. In the meantime, there was another job opportunity: bus driving!

“We have a major shortage for drivers,” Koenig reported as he shared that the issue was for extracurriculars, the bus drivers liking their particular routes. At the same time summer school pay was going up, while that for assistant coaches wasn’t, with wrestling tournament workers making a potential $75 and the position of Dean of Students/Activites Director also being approved in a separate motion by Verbeten and Geist.

“I’m not saying any of these is the value of what these people do,” Koenig said of pay levels at the district, “it’s just what we can auord." With that, it was into approval of the consent agenda, an amendment being made to personnel changes in resignations and retirements.

Following this, the district switched long-term disability insurance to National Insurance, the bid of $20,043 guaranteed for three years and saving the district $17,000 over its former carrier. With motion made by Verbeten and seconded by Seidl, the change takes euect as of Sep tember 1.

Tony Menard then sought approval to move forward with the planning stage for classroom remodel and a possible bus area on the north side, with Verbeten motioning and Seidl seconding to approve construction concept design.

“I think we would be foolish as a board if we didn’t go through with the design phase,” Verbeten said.

With two monitoring reports on the agenda next month, Verbeten said he wanted to learn more on the long-term program Orioles Achieve as presented by Mrs. Steinmetz.

“Just based on what I do,” the trained prosecutor said, reiterating that if it saved one kid, the program was worth it. From there, it was into self-assigned homework for the board, with members setting the target to read the preface and first three chapters of "Boards that Make A Diuer ence” before meeting next at the Board Conversation on May 16th.

Board conversations are open to the public, being held in the high school library.

Kayleigh Steinmetz and Janelle Schesel gave the Student Council update for April at the school board meeitng. Schesel is the public relations ocer for the Council. Photo by Joseph Back.

Bob Geist (right) administers the oath to board member Lanse Carlson. Photo by Joseph Back.

Becky Peterson (left) takes the oath as instructed by Bob Geist. Peterson is taking over for retired board member Je Boie. Photo by Joseph Back. 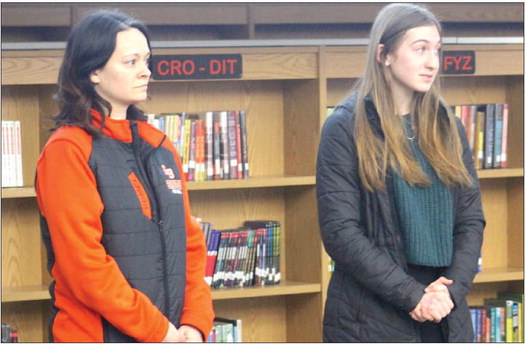 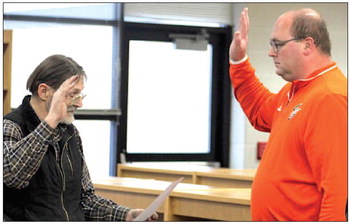 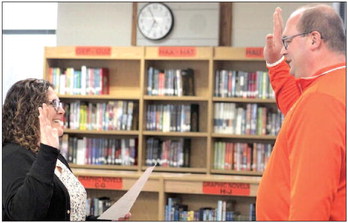