The City of Stanley has just received its most recent finan cial audit—and passed!

Appearing Monday May 2 to present before the Council was Baker-Tilly CPA Kim berly Schult, spilling the bean count on just how city finances looked, from an outside perspective. So what’s the exact word?

"After this meeting, we have just the final supplement event questions we need to do and a few items to wrap up,” Schult said,” but we are very close to the finals. We are ready to issue an "unmodified audit opinion or a clean audit opin- ion, saying that your financial statements are in accord with generally accepted accounting principles—the same as we’ve issued in the past.”

Then getting to the details, Schult shared the summary details.

"A drop in the fund balance, but that was planned, that was budgeted,” she said of projects like the Stanley Community Center, now completed.

Shifting next to a more in depth summary, Schult noted other particulars.

"So you have about $1.2 million total fund balance in the general fund,” she went on. “Which represents about a third of your annual operating expenses." Most of that, she said, was tied up in “nonspendable” category, with the main purpose of the city’s general fund being to advance funds to the city’s TIF District, the acronym TIF meaning “Tax Increment Finance” and used for attracting new industry.

“That’s what we call nonspendable,” she said. “That isn’t a current receivable. The general fund is not expecting to recoup” within the year, Schult said, calling the “nonspendable” portion of the general fund “a non-current asset.”

As to monies restricted in the general fund, these related to police and fire as per state statute, while the “unassigned” category was unrestricted, but in the deficit. Where the budget had higher revenues meanwhile was in the Community Development Block Grant portion and intergovernmental revenue, received for the now completed Community Center. Because of this, the city had exceeded the magic number threshold of $766,000 in federal funding, she said, while the actual fig – ure for the net change in fund balance was $336,000 after planned spending out of prior year's resources. As to expen ditures, they were under budget.

Ward 3 alderman and Council president Jacob Hu (left) peers into the audit summary Monday as Kimberly Schult of Baker Tilly presents to the Council during open session. To the back are city employees Don Goettl and John Hoel. Photo by Joseph Back. CITY AUDIT

nificantly under budget," Schult told the Coun cil, with the balance budgeted for but not spent being $603,720, "almost entirely in the capital outlay, Schult said. Timing and a split on work at the Community Center site between 2020 and 2021 had helped contribute to the under budget outcome for the current audit year, while police and fire had received capital outlay as well.

Shifting into trends for the adequacy of the general fund balance, City of Stanley finances showed a negative fund balance before adding in the TIF District.

"The way we like to look at the suvciency of your fund balance is to look at the unrestricted portion,” Schult told the Council. “So it’s the portion that is liquid and excludes the advance to the general fund from the TIF District and doesn’t include any dollars that have any donor restrictions or outside restrictions. Basically the money that you can spend.

Saying that it was industry standard to have at least two months of unassigned or unrestricted fund balance on hand, the situation looked better with the TIF District.

"So again it really just is the financing of the TIF District that is bringing this metric down,” Schult said. As the balance lifted over time it should change the way the general fund looks in terms of suvciency, she said. Bringing in the TIF brought the City to 17% in general fund op- erating figures, above the 16.7 or two months

Stanley ranked 356 out of 602 in Wisconsin for the latest comparative data for debt per capita, while it ranked fourth out of eight cities and villages in Chippewa County, shifting to third highest locally when calculating the state debt limit.

As to general fund debt service to non-cap ital expenditures, meanwhile, the City was still above bond rating agencies recommendation of 20 percent, reaching a low of 23.3 percent in 2020 before increasing back to 25.9 percent in 2021. A median reference value from 2017 – 2020 Baker Tilly client data showed the refer ence just under bond agency recommendations at 19.9 percent for 2020.

As to the sewer utility, for Stanley, the City has almost two years or 21.35 months of op – erating expenses on hand, while the figure of $1,414,676 in 2021 operating revenues com – pared with just $941,912 in operating expenses. Utility funds are meant to be flush, making the current surplus for each a good sign. Last but not least, were recommendations and notes on the number of people involved in financial ac tivities or with account access.

“It seems like with some of these recommendations we’ve have to hire more people,” coun- cil member Jason Meyer said of the city audit.

The need for more stau in an ideal situation is common to small governments and likely to be mentioned in a future audit, as it has at the school district as well.

General Obligation debt for the city has been trending down over the years, as shown in this graphic from Baker Tilly.

Compared to other cities with population of less than 10,000, meanwhile, the average saw 35.35 percent in GFOA money set aside.

As to the city's general obligation debt, the figures for 2021 showed thirty-six percent of the state imposed debt limit, for a total figure of $2,558,258. That figure had been trending down year by year from $4,053,289 general ob – ligation debt in 2017, while the City had paid ou its bonds from 2013 and was below the state borrowing limit for municipalities, Schult said.

Trending down before experiencing a percentage increase in 2021, the City's debt service to non-capital expenditures is higher than bond agency recommendations and the reference median of other municipalities. Image from Baker Tilly. 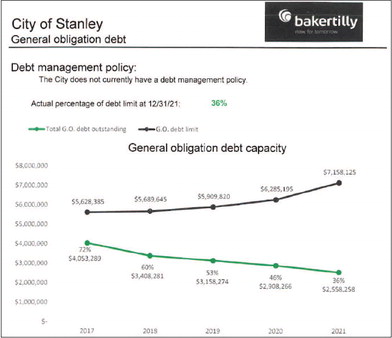 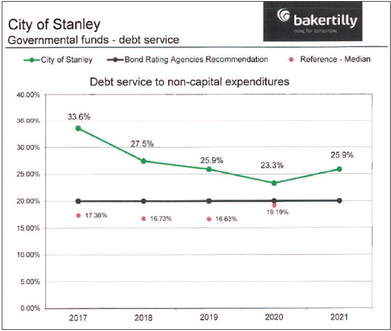