This week’s column is about what is annually one of the best weekends of my year and that is when I turkey hunt with my 21-year-old daughter Selina Walters.

This hunt would take part on a food plot that Selina and I have had the privilege to hunt turkey on for about 15-years. It is located close to my house in northern Juneau County, has a small pond and is surrounded on three sides by an oak and pine forest.

Selina and I would be hunting in a blind and I was glad for that as the now normal, cold rain and strong winds would be the theme for much of our three day hunt.

I did not know if we would hunt this afternoon as Selina had to work and had class where she is a junior at UWSP. When she pulled in the driveway late this afternoon, she said she wanted to so we pat- terned her 12-gauge and it was ou to the hunt where we did not see a bird but the two of us did some serious catching up as we simply do not get to see each other very much anymore.

Tonight, it was puppy time for Selina as Ruby’s pups are now 4-weeks old and pups have always been a big part of her life when she is home.

Saturday, April 30th High 39, low 34 Thankfully it wasn’t raining when we started our hunt, but it was not long after and the rain started and though there were breaks it was nasty. I had put a camouflage tarp on top of our blind, had a heater inside and life was very good.

There were turkey gobbling before daylight and for maybe 30-minutes afterwards but then they went silent. For me this was a morning of deep thought.

I put it together that 28-years ago to the day my father passed away from an apparent heart attack. I am 60, my dad was 60! The weekend before he passed away we had camped and tur- key hunted near Mazomanee. We had plans for the following weekend to fish on Lake Mich igan and yes I was writing this column at the time and my dad was a very big part of it.

On the weekend of May 22nd Selina's life will change, at least for the summer. She will take her last final on Friday, the next day two of her roommates that she honestly is like sisters with will graduate from UWSP and over at UW Eau Claire, her longtime boyfriend Isaac La-Budda will graduate.

By Monday morning she has to be moved out of her home and then she will drive to Eureka, Montana by herself to start a summer internship/job with the US Forest Service that begins on Wednesday.

Selina will be in northwest Montana, ten miles from the Canadian border and she told me today that she is buying a kayak when she gets there.

So, we are enjoying life, for the most part we are keeping the rain out and we are gabbing away like we always do but in a very quiet way.

Just like that a turkey gobbles and it seems close, due to the forest cover in a lot of cases you don’t see them until they are in range. Both Selina and I have tags and just like that we see two heavy bodied, long beards appear and life is very good.

Kind of bad luck comes our way when they are literally walking just out of range around our setup. I told Selina that I would give a call and I let it fly, pretending that I was a hen just begging for some loving.

One of the toms was not quite as smart as the other and Selina let it fly with a solid tur key load and at 31-yards that gobbler was toast.

Nothing mattered anymore, we would hunt that day, the next and I would on Tuesday. Three times Selina shot turkey on prom weekend. Once she shot one at Rod Bensley’s and she has that tail in her room. Her first bird, this was her ninth, was a double beard at the age of 11 and like when she heads to Montana the story goes on and on. I am not fib bing when I say this, which is something that I have always said, “get your kids involved in the outdoors and you will have a friend for life”.

Mark Walters and Selina after a very rewarding hunt. 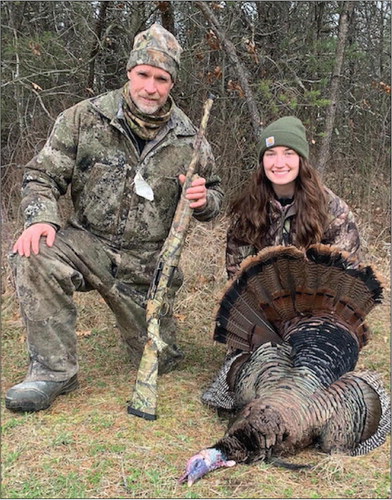 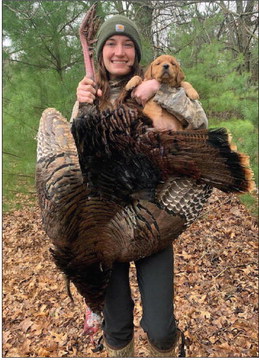