Mike Karlen Jr. and family are back from sunny Oaxaca (pro – nounced "wa-ha-ka") in Mexico with the post game report, and it's good! With a final score of 40 – 6 in the April 30 contest against Oaxaca at the Oaxaca Alliance Bowl, the "Team USA faced multiple obstacles that were uncontrollable, but the team stuck together and overcame them," Mike Sr. said of the game outcome. With Karlen Jr.standing in for the Team USA kicker at Oaxaca, proud parent Mike Karlen Sr. shared that, "his Karlen Jr. (center) with Team USA coaches Scott Hamilton (left) andTony Mangini (right), a former Green Bay Packer.

kickous sailed through the end zone and he was able to capitalize on his extra points” and that Karlen had been “the youngest player ever to play on a professional team” as stand-in kicker.

Now that he’s back in the States, however, it’s back to prepar- ing for college at Northern Michigan University, where Karlen Jr. will enter this fall as a freshman. Xtremo Deportes Oaxaca along with gave more details, translated and condensed from Spanish.

“With the participation of fútbol americano teams from the U.S., Colombia, Mexico, and Oaxaca (a state of Mexico) from April 28 to April 30, the four participating teams took part in clinics from several coaches, including T. Anthony Magini and Scott Hamilton of Team USA.

Come game day, it was Oaxaca versus Team USA, the game taking place in the state capital, also called Oaxaca.

Following this, the team from Mexico played against Colom bia. With the game against Oaxaca played under partly cloudy skies, the day was a success!

Signing an autograph for two fans of fútbol americano, the ad – jective to distinguish it from soccer, called 'fútbol' in Spanish. 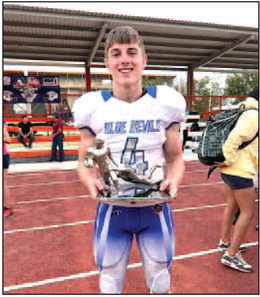 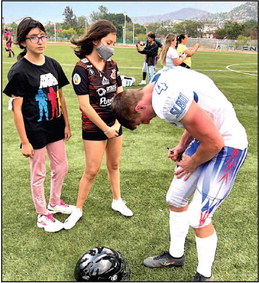