Fuel, oxygen, and heat. Put these together, and you have a fire. With fuel in abundance and temperatures warming up,Stanley Fire Chief Korey Hagenson shared some good tips for what to do and not do in terms of helping prevent wild- fires. After all, it only takes a

Smokey the Bear at Thorp shared the fire risk Saturday as much of Wisconsin remained under a burn ban, with parts of Burnett County evacuated for a wildfire before it was brought under control. Photo by Joseph Back. WILDFIRE

spark. Here’s some of what Fire Chief Hagenson had to say.

“Don’t just look down,” he said. “Look up. Look at tree foliage.” It might have rained and the ground may be wet, but the fuel overhead can still pose a danger. “If it’s windy out, don’t burn,” Hagenson said of another important tip, while materials also mattered. Paper could make big ashes while hardwood gen- erated smaller ashes. And the most important thing to remember?

"People being aware and being smart when you burn," the fire chief said.

Shifting in turn to the DNR report, much of Northern Wis- consin remained under "high" or very high" fire risk Tuesday morning, following a lightning and thunderstorm which saw light rain but did not dissipate the risk. While Taylor, Lincoln, Oneida, along with Barron, Polk, Burnett, and Washburn Counties were downgraded to “high” from “very high,” the state north of the Dells remains at "very high" risk of fire, with daily burning re strictions updated after 11 a.m.

That being said, there was some good news. As of Tuesday morning, there were zero wildfires statewide, with Chippewa County containing areas regulated by the DNR (known as DNR Protection Areas) and those not regulated by it. Fire doesn't d is – criminate by regulating agency, though, meaning that until further notice, it might not be a good idea—especially if windy. There’s also the local agency in charge.

"With the warm weather this weekend and high fire danger we WILL NOT be giving out burning permits,” Hagenson posted to Facebook for the Stanley Fire Department. “Remind also all open burning within the city must have a permit.”

Not just a bad idea, then, but disallowed for the present, in the interest of public safety and the common good.

The Wisconsin Department of Natural Resources keeps an interactive map at https://dnr.wi.gov/topic/forestfire/restric –

tions.asp , complete with county level restrictions and a col –

or coded danger key. As of Monday, Much of Wisconsin re –

A memorial to DNR forest firefighter Don Eisberner (top in – set) on Channey Road o County Highway H (lower inset) shares the details and extent of a tragic fire that started from an untended campfire in 1982, killing Eisberner after the tractor plow he was using to establish a fire break was sur – rounded by the fire from a sudden wind shift, with no chance to get out. Eisberner's death led to installing sprinkler sytems on equipment, to allow a window of time for others to get out in similar circumstances. Sign photo by Joseph Back. 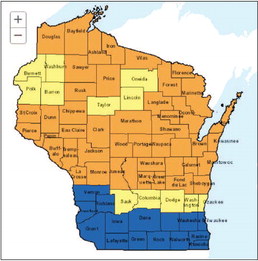 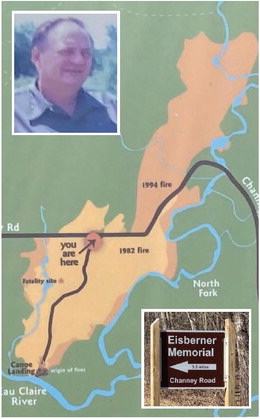