“You guys have seen the gas prices go up and down,” Lisa Fleming of Ayres Associates told the Council June 6. “We as engineers are very nervous about pipes and asphalt.” With four council members in the room and another (Kevin Hendrickson) on the phone to make quorum for the regular 7 p.m. meeting, Fleming had come to seek approval for several proposals by Ayres, spanning from a bid award for the South Broadway Sanitary Sewer, to Wetland Delineation for an East Industrial/ Business Park road extension, all the way to landfill monitoring for an old city dump, now closed.

As to the South Broadway Sanitary Sewer, Fleming brought forth a tentative bid from Haas & Sons Inc. of $79,466.45 for the project, stating that it included other areas as well.

“This includes repair of the outlet by the fire department and televising of Sec ond Avenue,” Fleming said, then adding of Second Avenue. “We don’t know what’s in there for sanitary.” Council member Holly Kitchell had a question.

“If the bid is awarded, when will work begin?” She asked.

“They haven’t given us a date,” Fleming said of Haas, then saying that Ayres had given Haas until October 15 and that the job was small enough to be worked in with other work Haas might have. Motion being made by Kitchell and seconded by Jacob Huu, the South Broadway Sanitary Sewer project was awarded to Haas & Sons.

As to Wetland Delineation for the Pine Street road extension, the price for Ayres to do the job would be $3,700 Fleming said, with the area restricted to the road itself. The reason for needing wetland de- lineation had to do with two factors: no record found from 2012 and the fact such things were only good for three years.

“We reviewed all your reports,” Flem- ing told the Council. "We couldn't find the delineation from 2012.”

This being so, a motion was made by Huu and seconded by Kitchell to do the delineation for road extension, negotiations with RESCO (the road user) still ongoing. Council member Jason Meyer raised questions on the road cost, while other Council members said it was the cost of investing for development.

“It’s like building a road for one house,” a member said. “When you do it you hope there will be 20 houses.”

On that note, the Council is positioning the city for growth in the east and west industrial parks, with soil borings to be collected from present work and held in reserve along with those from work to come.

"That's one of the first things compa nies ask when they contact us is, ‘do you have the soil samples done?’” Mayor Haas shared, with the idea to get these on record so that if and when more companies do contact the city, Stanley will be ready. Haas, Clerk Thiel, and Mike Henke had spoken with Chippewa Valley Electric and Dairyland about getting the samples from their projects in the park, helping fill in question marks for companies that may want to invest in Stanley and the area.

Not done with proposals, Fleming next jumped into questions of stormwater and a well at ACE Ethanol.

As to the stormwater, Fleming recommended going with the DNR requirements of 40 percent suspended solids regarding the high school bus lot capture zone, while two wells at ACE had been sunk recently with a combined output of 100 cfs. The wells would aid ACE Ethanol in ethanol production, which involves water to make.

As to the second well at ACE, it was 300 feet deep and bedded in quartz. According to Fleming and talks with the well driller, cracking that quartz again might yield more water. Fracturing the rock frees up pathways for more groundwater to get to the well, with neighboring wells not auected by the two at ACE, it was made known.

Shifting from well output to landfill monitoring, Fleming said that there were no clear records but that the landfill need ed monitoring twice a year, in response to a question from Kitchell on how often it was required.

"This is our landfill south of town," Mayor Haas clarified of the location. With motion by Fitzsimmons seconded by Huu, the landfill monitoring proposal was ap proved on a time and materials basis “not to exceed $2,650.” The monitoring agree- BID APPROVALS

Item 10, meanwhile, was tabled due to a miscommunication. “I misunderstood what you were asking,” Fleming said of the Pine Street road extension matter to be revisited. Motion to table and revisit was made by Huu and seconded by Fitzsimmons. 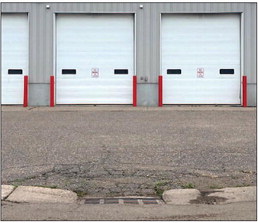 Among the projects to be included in future work is this drain on Franklin, pushed down to its current position bythe weight of heavy fire trucks exiting the station. Photo by Joseph Back.