Although the weather was wet and rainy, a number of brave souls took on the challenge of participating in the Annual Stanley Sportsman’s Club Benefit Fishing Contest held at Otter Lake this past Saturday morning. Despite weather conditions, all five fish categories were filled and cash prizes were awarded.

First prize in the Bluegill category went to Denise Robinson with a 13 3/4 oz. Bluegill, followed with one by Lon Hampton for 12 1/2 oz. Jennifer Charipar took third with an 11 oz. Bluegill.

For the category of Crappie, Ryan Kern took first place with an 11 1/2 oz. fish, while Roger Charipar and Bob Gruenwald both came in with a 10 7/8 oz. fish. The tie was broken with time of catch, with Charipar taking second and Gruenwald third.

The Sportsmans Club uses the proceeds from the Otter Lake Benefit and other contests to invest money back into area lakes and parks. 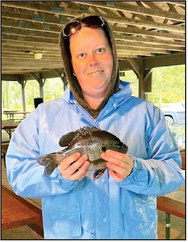 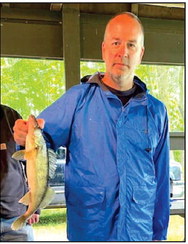 Kaydence Ferris shows ou the $370 won by hergranpda Dan Ferris in the50/50 rawe. Ferris made a $30 total investment,part at the start and part just before numbers were drawn. The winning num -ber was 2337898. Photo by Joseph Back.